Here's Something You Don't See Every Day.
This is an actual arrest sheet for Charles Manson.
The Date: New Years Eve, 1959!  Enjoy! 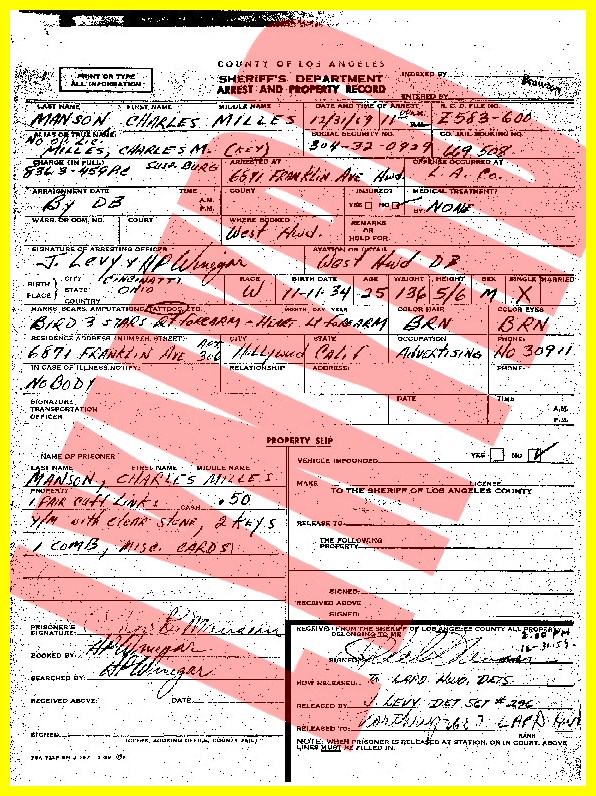 Hmm, funny that he was hanging out on Franklin St. in 1959...wonder how close that address is to where Tex lived or hung out..

"In case of illness, notify NOBODY". HA HA.

I'm assuming this was a burglary arrest?

It says his occupation was advertising.

What was he advertising? Girls for sale?

Kimchi, Franklin Street must be the place to hang out in LA. LOL.

In 1959, Tex was probably happily skipping to Sunday School.

Y/M with clear stone, must be some type of jewelry?

In Case of Emergency: “NOBODY”!

What was the address where Manson shot Lottsapoppa?

1 Pair of cuff links: You never know when you might need some cuff links. HA HA.

1 Comb: I'm assuming this was before he had that wavy mane. So I guess 1 comb would suffice.

"Y/M with Clear Stone". Don't have any idea what that is. A ring?

Lynyrd, according to Ed Sanders, Tex's girlfriend, Rosina, lived at 6933 Franklin Avenue, next to the Magic Castle.

Crowe was shot at Rosina's pad.

I just realised...
I "outed" his social security number. LOLOL

Oh well...
I don't think too many folks are anxious to do business as "Charles Milles Manson". LOLOL

Wow...
Lottsapoppa was shot, just a few doors down.

With all the records on Manson's various (and many) crimes... it doesn't seem he was a very successful criminal. LOL

If you're in jail for burglary, with 50 cents in your pocket... you should prolly think about choosing another line of work. LOLOL

Oh well...
I don't think too many folks are anxious to do business as "Charles Milles Manson". LOLOL>>>

I saw that. But I think you're right. I don't think many people want to try to get a credit card under the name Son of Man. HA HA.

I actually feel bad for Charlie.

Can you imagine... sitting in jail... 25 years old... on New Years Eve... and you can't think of a single emergency contact person?

Can you imagine being asked that question by a police officer (who's filling-out the form), and you don't have a single name to give him?

You gotta wonder what kind of Christmas... a guy in that situation... had 6 days prior.
Probably "none" as well...

That is sad, but in his later years, he had lots of people to put on the police report.

I sincerely doubt if Charlie EVER had a good Christmas. Or maybe any Christmas at all.

I didn't know Rudy was still alive. I wonder what he's been up to all these years!!

Wow, Rudy died...from what? Wonder what knowledge he took to the grave...

Thanks for the info Kimchi. I didn't know that.

I don't know how Rudy died. He was 82, I guess it was old age. Whatever knowledge he had about this case, he's kept it to himself all this time. Just like everyone else!!

So this was a few doors down from the Crow shooting?

So Charlie knew the area well..

Gotta laugh, it was assigned to the West Hollywood DB - sure is a different place today, with different crimes.."Gay lover shoots pimp" is headlines today..

Here there and everywhere..

Did you get a chance to check out Jay's property? Do you know who owns it?

You know on the last thread, Roman said Jay owed $5400 to the dentist.

First of all, how did he know that? Do they go to the same dentist and he's a little too chatty?

Also, what kind of work did he have performed that would have cost $5400 back in 1969?? A whole new set of choppers?? Maybe some super fantastic teeth whitening?? Braces? HA HA.

>>>Kimchi said: Gotta laugh, it was assigned to the West Hollywood DB - sure is a different place today, with different crimes.."Gay lover shoots pimp" is headlines today..>>>

I've been to LA a few times, but don't really know the city. But I have heard about "west Hollywood". It's gotten pretty ripe!! LOL.

Looking at the numbers, the dental work he had done possibly cost more or as much as the Porsche he was driving.

Maybe he was going to a Beverly Hills dentist that overcharged him!! He should have just promised him "free hair styling for life" to compensate. HA HA.

You know, Jay's house had the most unusal architecture. It has a turret and also a tiny little window in the rooftop. I believe the house was built in the 1920's.

I'd love to go in that house!!

Kimchie, please "scratch my itch" and find out what you can about that house!!! Thanks!!

Katie... Actually, Roman did said they used the same dentist.

Is there still talk of closing sectors of the government down?
...or did they come-up with an 11th hour package?

Hi Lynyrd! At the 6:00 news I heard they were still arguing. I certainly hope they didn't shut it down.

I feel bad for the military families who will go without, which is total nonsense, and also anyone who works for the government, because they won't be getting a paycheck.

You know, a lot of people live from paycheck to paycheck, so to miss one really causes a lot of chaos. Groceries, electric bill, water bill, etc.

I sure hope that if they do shut down, it won't last long.

So, Roman & Jay went to the same dentist. And he just couldn't resist talking about other patients. Hrrrummphhh.

You know what I hate? Dentists who never stop talking.

You have all kinds of hands in your mouth, and they're chatting away, asking questions, "well what did you do this week". And you can't answer because your mouth is filled with stuff.

And then he keeps talking.

Reminds me of the dentist on Seinfeld.

"You know what a dentist is don't you? A doctor who failed medical school".

"Pretty soon you'll say they have to have their own schools.

They DO have their own schools!"

WASHINGTON — President Barack Obama and congressional leaders struck a last-minute budget deal on Friday, narrowly averting a government shutdown that would have idled hundreds of thousands of federal workers.

With little time to spare before a midnight deadline for a government closure, Obama's Democrats and opposition Republicans agreed to a bitterly fought compromise plan that would cut $37.8 billion in spending for the rest of the fiscal year.

Glad to see you have made the Cols radar.. My fingers are crossed for you that this becomes the next " Must visit" Manson site...

Hi Circumstance!! Good to see you. We need to start our next reading assignment so we can all put our heads together again and have an in-depth analysis of "what really happened". HA HA.