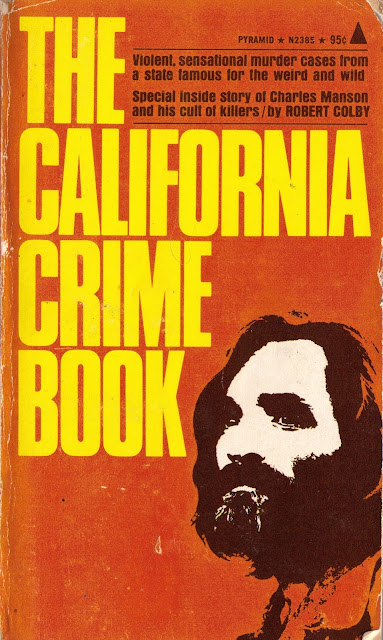 My latest book report is on an obscure book titled "The California Crime Book" by Robert Colby, Copyright 1971, Pyramid Books.

It contains information on 17 well-known murders in California history, including TLB, Zodiac and Black Dahlia.

The Manson section is a 40 page summary of Manson and the murders. It does seem to place more of the blame on Tex than other books have. The only new information I found was in the following two paragraphs:

In the years of his freedom between 1958 and 1960, Charlie began to develop his interest in and power over women. Although he was described as a bartender and “clean up” man in a Hollywood lounge, he posed as a producer , using the gag to excite the interest of movie hopefuls mostly in their late teens. Some of these were still under the wing of their parents and Manson was often in trouble with irate fathers, one of whom pegged him as a “sex maniac.” Among the teenagers was a girl who claimed that Charlie had drugged her and then seduced her while she was turned-on.
Charlie met other girls when he became a ballroom dance instructor. He also sold freezers door-to-door, and got anything but a chilly reception from his female customers.

Would You buy a freezer from this guy? LOL 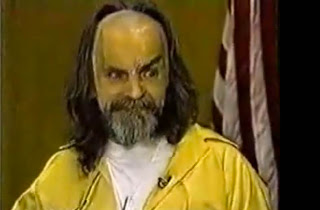 Posted by LynyrdSkynyrdBand at 10:20 AM
Labels: The California Crime Book

You surely do have access to quite a collection of books!

When I got the updated Helter Skelter, I noticed a picture was missing from it. Paul Crockett if I remember correctly.

Sometimes the paperbacks are old and smelly. I found carpet fresh and the book in a ziploc bag for a few days gets rid of the smell.

Freezer salesman? I've never heard that. I wonder why he was selling freezers, I thought he had all the money in the world.

His interest in controlling women was a necessary business need in order to become a better pimp. He trained in prison to be a better pimp when he was released. When that day came he saw that hippies were easier to control than hookers. Charlie at heart is a businessman always seeking ways to become more successful.