Sunset77 shares his tour of West Virginia Penitentiary at Moundsville. Charles Manson once petitioned the warden of Moundsville (in writing), for a transfer there. (Letter pictured below)

A month or so ago, I watched a YouTube vid where Charles Manson claimed to have visited his mother in the West Virginia Penitentiary at Moundsville, when he was around 5 years old.  I didn't think this was possible, as I remember hearing about Moundsville in the local newspapers when I was a kid.  There was some type of riot or murder there about every other week.  I would have guessed that if a woman would have set foot in there, in about 5 minutes her holes would have been about as big as a paint can.  I looked on their website, sure enough, Moundsville held women until 1949.

If you ever see a road sign in WV that says "rough road" they ain't kidding.  After several hours of interstates and back roads in the cold (that made my butt sore), I rolled onto Jefferson Ave. in Moundsville, hopped off the bike and took this pic: 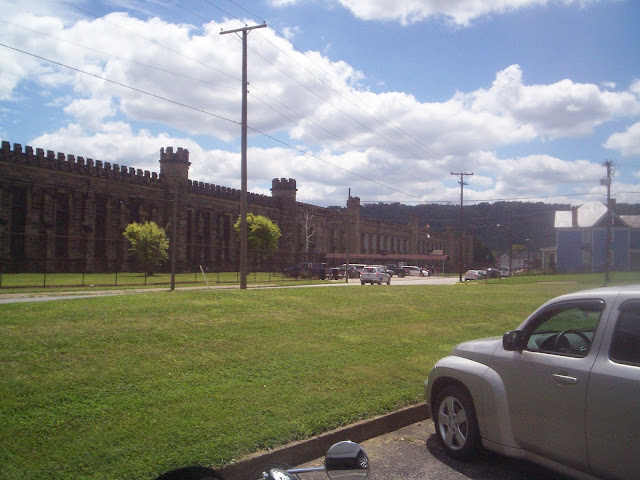 At the bottom center of the pic, the right side mirror of the Triumph is visible, the pix aren't very good because my camera isn't very good.  To my amazement, when I turned around, there was one of the "mounds" the area is named after.  They think these are some type of ancient Indian burial mounds.  They dug into one and found human remains. 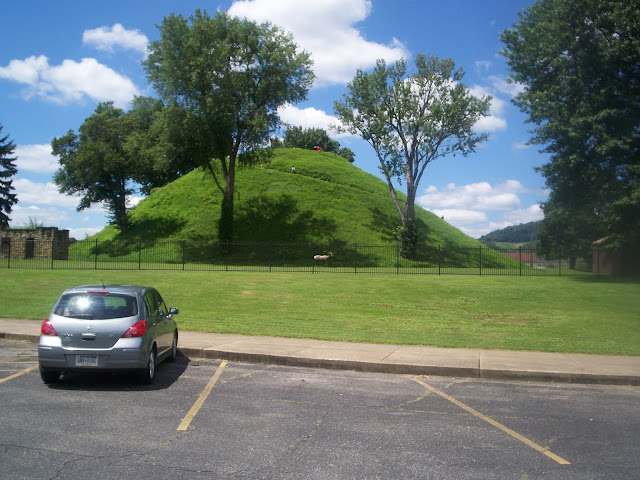 This is the inside of a general population cell block.  The "punishment" block was very similar, except there was more bars and steel mesh welded over the front of the cell doors.  I didn't take any pix in the punishment  block (there was less light), but I think the real reason was, I didn't want any pix of there to remind me how horrible it was.  They put 3 men in a cell... 2 had bunks... the third had to sleep on the toilet.  They called the punishment block "The Alamo" because you were in a fight for your life the entire time you were in there.  Our guide said the screaming and banging would reverberate all across Moundsville.  The guard in the gun cage would fire his high-powered rifle at a target at the end of the tier to shut them up. 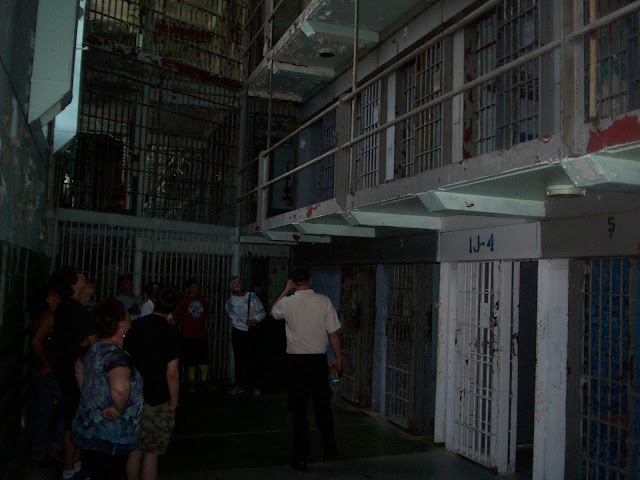 I suspect the guide is a prison guard currently.  He didn't look happy when I stuck my hand through the bars to take this unobstructed pic of the electric chair.  It was built by an inmate.  They immediately had to put him in protective custody because the other inmates wanted to kill him.  9 men died in that chair. 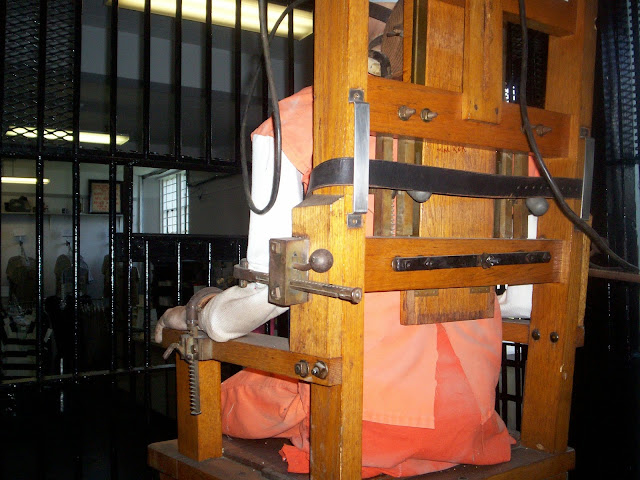 The prison was built in the 1800's, prisoners were originally brought in by horse and wagon. 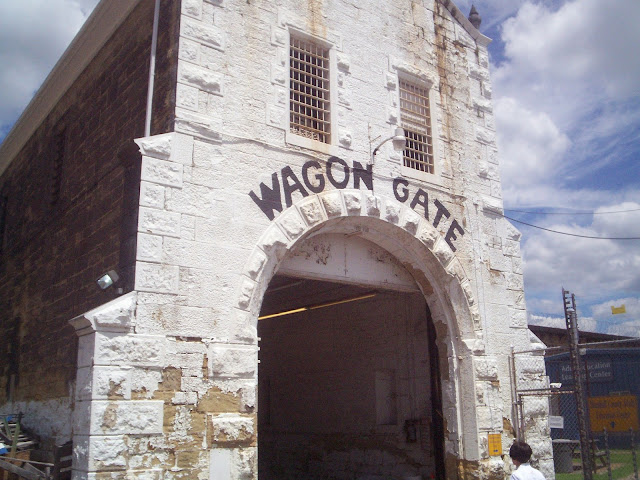 Inside the Wagon Gate, was a trap door for one of the gallows.  People would bring picnic lunches to watch the hangings when they were public.  It ripped the head from one heavy set guy.  Another man was tied and hooded... but before the noose was applied... the trap door opened accidentally, and he fell to the bottom.  I'm sure he was busted-up good, because it was a 25 ft. drop, from where I took that pic.  They took him back up and finished hanging him.. 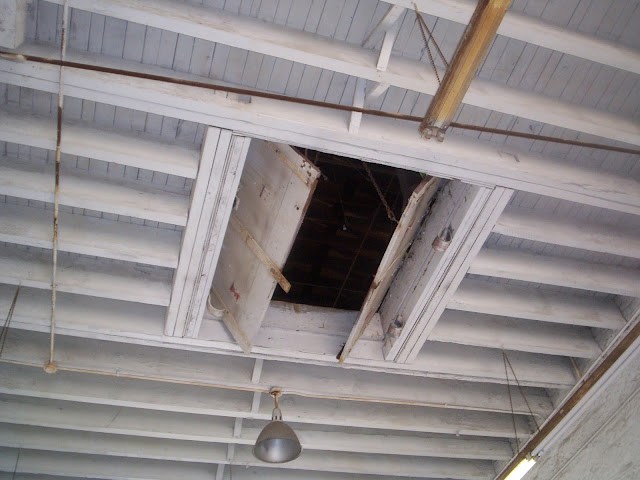 Inside a contact visiting room, the kids were scared of the place... so the inmates decorated it with colorful paintings and this paper mache diorama of what they assumed the "Indians" looked like that made the local mounds.  Our guide said that underneath that room, an early superintendent of the prison had medieval torture devices installed and murdered prisoners at a rate of about 2 per week.  When they asked him where the remains were, he said "look in the walls".   He also destroyed the records of many inmates. 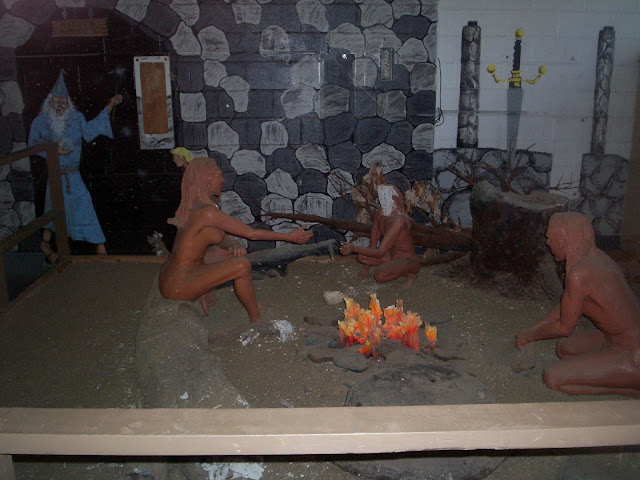 I remember when WV had faded license plates, now I know why.  Our guide said the blue building on the right was the "industry" building where every license plate in WV was made.  The inmates urinated in the paint. 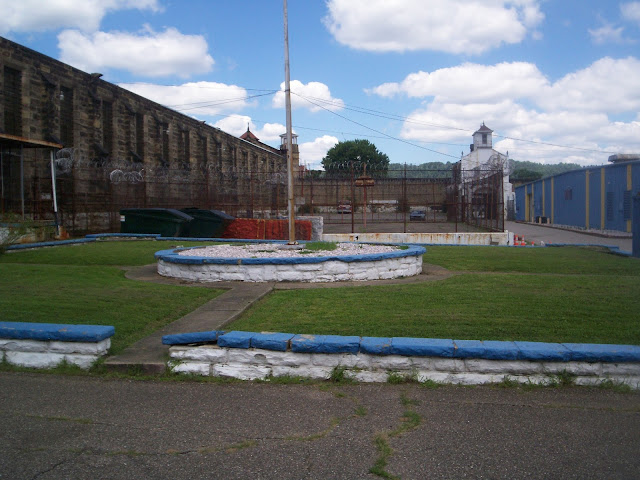 The warden of the prison was required to live there with his family for a number of years.  He could come out onto that small platform on the second floor of the admin building and address the inmates in north yard.  It was caged in because the inmates would throw more than kisses at him.  Directly underneath the platform was the stairs down to "the hole".  We didn't go down there, but our guide said 30 men would be locked in a cell in total darkness and fed bread and water once a day.  The entrance down to the "Sugar Shack" was in the south yard, there was a pool table down there and possibly a jukebox,  the inmates generally policed the sugar shack themselves.  I've read it was called the sugar shack because of the homosexual activities down there.  "Paranormal" investigators find that place interesting. 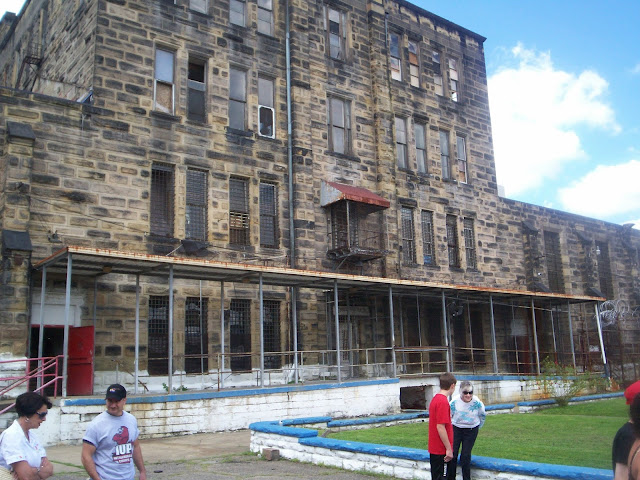 The letter that Charles Manson wrote to the warden of Moundsville requesting permission to transfer to there... is still posted at the prison. (See Below)
I've seen it's contents "translated" on other sites so I won't try to do it here. His handwriting looks slightly more readable in person than it does on the internet, at least to me.  Our guide said the small town of McMechen WV was about 12 minutes up the road, I wanted to ride up there, but I didn't have time. I'm sure the CA prisons Manson has been in are rough, but I doubt they match the brutality of Moundsville, our guide said it was closed by Federal order in 1995 because of the deplorable living conditions. (3 men in 5 x 7 cells in 115  degree heat with insects, rats, raw sewage leaking from the pipes, etc.) 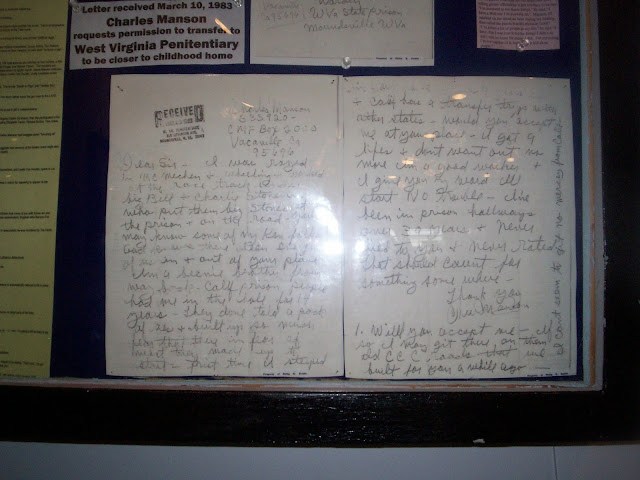 Having been in prison myself, I felt like doing a wheelie right through the front door and leaving a black mark as I rolled out of there.  The smaller Moundsville grew in my rear view mirror, the better I felt. 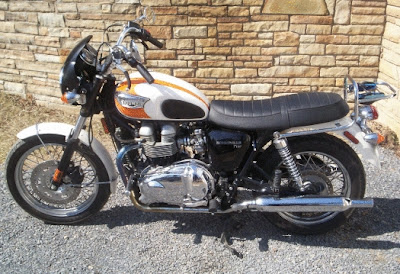 Posted by sunset77 at 10:46 AM
Labels: Kathleen Maddox, West Virginia Penitentiary at Moundsville

Thanks Sunset!
Awesome Tour and Narration!
I feel like I just visited the prison, myself!
That's what it's all about Brother!

Manson should count his blessings, that his transfer request was denied.

West Virginia Penitentiary appears to have been an accurate representation of hell on earth.

I wonder if Manson really knew, what he was in for (at that place)?
I doubt it.

I love the title, that Sunset chose for this thread.

What a perfectly sarcastic description of the place.

Is this still a working prison? Maybe you mentioned that and I missed it.

Why would Charlie want to go there? Sounds pretty rough!

Katie asked:
Is this still a working prison?

Sunset said:
"our guide said it was closed by Federal order in 1995 because of the deplorable living conditions. (3 men in 5 x 7 cells in 115 degree heat with insects, rats, raw sewage leaking from the pipes, etc.)"

Oops. Thanks Lynyrd, I was skimming too fast I guess....

I love that freakin' motorcycle.

Is that a Triumph?

Sorry, this is off subject but I don't know how to start a new thread.
Anyone know where Jay got that black Porsche and did he ever own a black mint condition 1939 Pontiac ?

Thanx for the post, I hate to say anything, but I noticed a couple of possible editing errors. The caption of one pic is posted twice, and my user name is "sunset 77" with a "T". No problems though, I make mistakes also.

Also, I agree Lynyrd, Charles Manson may have wanted to be closer to his childhood home, but Moundsville would have probably been far worse for him, no matter where he was at. Manson requested transfer there in 1983, there was a riot there new years day, 1986. There is vid on YouTube where a former inmate says that one of the inmates killed in that riot was murdered by cooking him in a pot of beans. He said they put him in a large pot, other inmates stood on the lid, and they cooked him till the "meat came off". I don't know if that story is true however, 3 inmates were killed in the riot, 2 were supposedly stabbed, the cause of death of the third is kind of sketchy.

When inmates at the prison died and their bodies weren't claimed, they were sent to "White Gate Cemetery" It's 4 miles up the road, the warden's wife in the 1950's put up the "white gate". The prisoners didn't get headstones, instead "license plates". A pic HERE.

There were several parts of the prison I didn't take pix, I'm not much a photographer. In the cafeteria there was a "V" shaped window at the back, it had 2 gun ports but they couldn't make a complete "crossfire", plus there were obstructions. Our guide said there was "gas canisters" in the ceiling. He said that gas would make "snot come out of places that snot wasn't supposed to come out".

Yes, the motorcycle is a 2005 Triumph Bonneville T-100. It wasn't really suited for a long ride, but when I got to the curvy WV roads between Waynesburg PA, and Moundsville, I was glad I had it. The paint is "Baltimore Orioles" orange. (at least to us).

Sorry Sunset.
I updated the thread, and removed those errors.

Although, Katie is supposed to proof-read new threads for errors... so, her bad too! LOL

What a horrible place! Of course, in those days, prisons were for punishment, not to lollygag around so I guess it's understandable. But, still....!!

In the 2nd pic, is that an animal by the fence? Maybe a deer?

Thanx for fixing the errors, I don't really care who gets the blame for it, just as long as it isn't me.

Venus asked about that deer in the second pic. I'm pretty sure it was a "fake" deer of some type. It never moved, I think it was there when I got there, and still there after the tour. I never walked over and looked at it, I didn't have time. I was actually in the parking lot of the Mound Archeological Museum, I wanted to look at the mounds, but I didn't have time.

Katie asked if that was still an operational prison, I can tell you this, if it was, I sure as hell wouldn't have been anywhere near it.

I wonder how many many of "The Wild, Wonderful Whites" did time there......

RIP, all the victims of the Manson Family on this the 44th anniversary of your murders.