Follow-Up Story! LOL
Sharon Tate's Sister:
"She Was NOT Wearing Ring When She Was Murdered!" 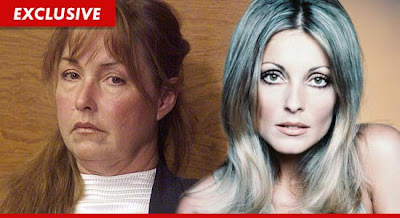 11/22/2011 6:08 PM PST BY TMZ STAFF
The Sharon Tate "engagement ring" hitting the auction block next week was NOT taken off the actresses' dead hand after she was murdered ... because she was NOT wearing any rings at the time of her death ... this according to Sharon's sister Debra.
Debra tells TMZ ... the ring featured in an upcoming auction on GottaHaveRockndRoll.com DID belong to the actress ... but she gave it away to a family friend long before she was killed by the Manson family in 1969.
Debra tells us ... the ring was not an "official" engagement ring -- but rather an "unofficial symbol of her relationship" with Roman Polanski. Debra says, "The ring was not Sharon's style and she never wore it."
Debra says Polanski later gave Sharon an "official" engagement ring -- a gold and diamond band "which she treasured."
Despite the auction house's claim, Debra is adamant Sharon was NOT wearing ANY rings on her finger at the time of her death -- adding, "Because Sharon was pregnant, she couldn't fit any rings on her finger."
Sharon was two weeks away from her due date when she was murdered.
So far, no comment from the auction site.
Thanks Again, Mary!!
Posted by LynyrdSkynyrdBand at 9:24 AM

You KNOW your Jay and Sha-don!!
(right down to the jewelry, evidently) LOL

LOL - can I be listed as the field reporter? just kidding...

"Debra says, "The ring was not Sharon's style and she never wore it."

TMZ has a photo of Sharon and it appears that she's wearing the ring on her little finger.

If Sharon never wore it, was that picture photoshopped?? Interesting.

Buyer beware! Nice find. HAPPY THANKSGIVING EVERYONE Patty is off to take her $#@&^%! midterm

Happy Thanksgiving Patty - and good luck on your midterm!

Thanks Patty! Have a happy & safe Thanksgiving! :)

I do know my stuff!! Sharon DID wear this ring as there are photos of her wearing it and it was in the coroner's report (I think that's where I saw it) that she was wearing her wedding ring so it looks like Debra was wrong about that. They have to keep accurat track of belongings of any person.

Now I want to see the supposed engagement ring that she really had! I've never seen her wearing any other ring on that finger except her plain gold band.

Wow - the plot thickens once again...

TMZ is reporting that "a rep for the auction house GottaHaveRockAndRoll.com tells us, "It was speculated that the ring was on Sharon Tate's finger at the time of death but never confirmed so we do not dispute Tate's sister Debra's claim."

The rep adds, "We do, however, have photographic proof of Tate wearing the ring (seen above) and written confirmation from Roman Polanski stating that this was, in fact, the engagement ring that he gifted to his then-fiancee, Sharon Tate."

this could go back and forth several times and could just be chalked up to Debra not knowing the facts but still exploiting the situation...who knows

I hear you, Mary. Maybe this was sort of a pre-engagement ring?? I'm sure that Debra doesn't know everything about her sister's life as I don't think any of us know every deatail of our own siblings lives! I've never heard of Sharon being given any other engagement ring by Roman other than the claim that this is the one.

But, here's a thought that just popped into my head. Could Jay have given her this ring? The stones are supposedly opals and garnets. Opals are the birthstone for October when Jay was born and garnets are January's birthstone which is when Sharon was born.

TMZ has posted a letter, supposedly from Roman, saying that "he gave the engagement ring to Mrs. Gutowski, wife of Gene Gutowski, in honor of their friendship".

That really says nothing. It just says he gave Mrs. Gutowski a ring.

In fact, that letter could be from anyone. It's not on letterhead or any traceable material.

Is this auction house that desperate to sell this jewelry, knowing that it could be in for a lawsuit on authenticity?

But....just as Patty says...Caveat Emptor. I've worked for auction companies and the terms and conditions are very clear. You are buying "as is, with no guarantees".

Venus, thanks for all your info!!! You do know a lot of things "Jay and Sharon". LOL.

>>>Venus said: But, here's a thought that just popped into my head. Could Jay have given her this ring? The stones are supposedly opals and garnets. Opals are the birthstone for October when Jay was born and garnets are January's birthstone which is when Sharon was born.>>>

Now that's a good "what if". That would explain a lot about the disposition of this ring. If the police gave it back to Roman, he most assuredly would have given it away.

This is just another puzzle piece that doesn't fit...and the people who know the truth aren't volunteering it. LOL.

The only people left alive at this point who would have personal knowledge of any rings that Sharon wore are Roman and Debra, that I know of.

I've never read where Roman and Sharon spent any time with any of Roman's family or extended family.

Maybe if they contacted someone like Patty Duke or Mia Farrow or someone else who was around Sharon before her death they might solve the mystery of this ring. I don't know if she wore the ring occasionally, all the time, or at all. Those factors would certainly come into play if someone asked a person who was only around Sharon for a time...like a movie shoot.

I'm pretty sure that asking Tex or Pat if Sharon was wearing a ring would come up with a big "shrug". I don't think that night they were admiring jewelry. They didn't even taken any.

The fact that they didn't take any goodies from the house blows the theory that they were supposed to raise bail money, doesn't it? There was some money on the table by Sharon's bed, Jay had money in his wallet plus he was wearing a Cartier watch. I don't know if the others had anything of value on them. I think Sharon's ring was 24K gold so her ring and Jay's watch were certainly hockable.

Venus, that's exactly right, which blows the theory that they were only after money out of the water.

Jay had a very expensive watch, and the the fact that they didn't take that, or any other valuables at the house says to me that either they weren't after money, or they were so intent on death that they forgot about it.

They were very adept at stealing cars and credit cards. Jay had a very expensive Porsche. Gibby had a fairly new Firebird.

Why not steal those? They stole both of Gary's broken down heaps.

Tex claims that Charlie sent him to get money and kill people. I guess he wasn't listening very good. The only house he hit had lots of valuables worth money, but they just split without it.

I guess killin' wears you out. HA HA.

You know if they were using VW parts to make dune buggies, what kind of souped up dune buggy could they make out of a Porsche???

Tex missed his calling that night. He could have told the girls "Y'all drive back in that broken down Ford. I'm coming home in style".

And boogied back to the ranch in that Porsche. He didn't even have to hot-wire it. Jay's keys were in his pocket.

Sometimes I gotta shake my head at that guy. You were good at killin' but you weren't good at much else. HA HA.

Venus, I also like your theory about Jay giving this ring to Sharon. Makes sense because of the opals and garnets. Maybe Sheila Wells, who was probably Sharon's best friend, would know something about this ring.

I always thought it was rather "funny" that they all (especially Tex) claimed that they were just following orders which is why they committed the murders that night. However, Charlie told them to go from house to house until they collected enough money for bail, I think it was 5 or 6 hundred dollars. Considering who was in the house that night, they could've come up with that amount of money with no problem. So, why were they killed if the money was supposedly the motive? Someone clearly wanted them to be dead, but it doesn't excuse the fact that they came home without the money they were supposed to get. Weren't they afraid of upsetting dear ol' "dad" due to their disobedience?

Thanks Carol. I thought that was an interesting thought too.