According to TMZ:
Sharon Tate's Engagment Ring to be Auctioned?? 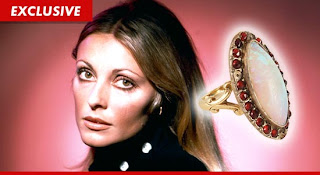 "Murdered actress Sharon Tate's engagement ring -- the one she was wearing when she was stabbed to death by the Manson Family -- can now be yours, TMZ has learned ... if you're willing to drop at least $10,000.  According to the auction house hawking the ring, Tate's husband -- director Roman Polanski -- removed it from her finger when he was identifying her body at the morgue. He proposed to her with it in 1967.  The ring hits the auction block on November 30th at GottaHaveRockandRoll.com ... along with a ton of other Hollywood and music memorabilia, including one of Madonna's bustiers and Justin Bieber's Super Bowl commercial jacket".
Full Story here:  http://www.tmz.com/2011/11/22/sharon-tate-engagement-ring-auction/
Submitted by Mary!  Thanks Mary!!!
Posted by LynyrdSkynyrdBand at 5:39 PM
Labels: Sharon Tate

Damn... that's one ugly-ass ring though huh?!
Or, do I just have no taste in women's jewelry?

Anyone have 10 Grand they don't know what to do with? LOLOL

If you click on the photo, it gets larger.

I think it's missing a couple rubys.

Maybe Debra hawked them, in a momnt of weakness? LOLOL
(Sorry... bad joke. I couldn't resist)

Yeah... you and me both, Tom.
I've got a couple other ideas for 10 grand, besides some ugly ring Roman Pole-Yank-ski bought...

But I won't go as far to say as I'm not interested in Manson Memorabilia.

If you could bring that Ford Fairlane, the rope and forks, and a bunch of other stuff to the east coast, I would pay to go see it.

Not my proudest moment, but I would want to see it.

Okay, am I crazy, or does that look like a clip-on earring?

He goes to identify the body and starts removing anything of value. He obviously never placed it back on her finger at her service.

I guess he thought it might come in handy with another chick.

I wonder who is selling it????

Worn on the hands that fended off a pitiless Sadie and the amped-up Belladonna Tex, doing overtime on the devil's work.

Wonder if that'll be the spiel on the auction block? Nasty.

Her final version was that she was there but was too scared to do anything.

If she had just kept her goddamned mouth shut from the beginning.

But that's our Susie. Can't change it now.

I don't even want to think about how those rubies went missing...to be sure it was intact before the murder. Poor thing!

Supposedly, the only jewelry she was wearing were her wedding ring and a pair of gold stud earrings. No ring like this was ever mentioned. I believe this info was in the autopsy report. I've never heard that Roman ever went to the morgue or identified her body. Didn't William Tennant identify all of them (except Steven Parent, of course)? I have seen this ring on Sharon's left pinky finger in a few photos. I certainly wouldn't want it.

One has to wonder how vast TMZ's knowledge of the case actually is, huh? LOL

Any TLB scholars, know the specifics?

(I believe) The article has a link for more specifics on the auction.
Maybe that site will provide more answers.
I'd be curious to know, who currently owns the ring.

It includes a humungous photo of the ring, and a photo of (what looks like) Sharon wearing the ring on her "pointer" finger.

That's definitely a picture of Sharon Tate and it looks like the ring is on her pinky finger to me.

I appears to be the same ring.

Venus you're right Tennant did identify the bodies at the crime scene. I don't recall reading that Roman identified Sharon's body either. Maybe the police gave the ring back to Roman after the autopsy or something.

Well the book club seems to have run into a snag. The first part of the book is kind of boring at times, it's just building up to the killings.

But once we get to that point, the running to the desert and eventual arrests and trial, it's a lot of interesting reading and I think most of you will want to discuss it at that point. :)

the plot thickens with the ring...seems this thing has gone around the bend a few times - it has been on several auction sites from the looks of it...there is a thread talking about the ring with a picture from 2008, I think ....

as far as i know polanski never saw tate's body. tenant identified her at cielo and her father was the only person to see her in the coffin.

I always thought Sharon hated rings because she didn't want to draw any attention to her hands (she was a notorious nail-biter). Interestingly (at least to me), Marilyn Monroe didn't wear rings for the same reason: she didn't like her hands. I have always read, as katie said, that Sharon was wearing a plain gold wedding band and gold (hoop) earrings when she was killed.

Thanks for confirming that Beauders. I agree!

I didn't know that Sharon was a nail biter. Interesting!

I believe it was Venus who mentioned that she was wearing a wedding ring and gold stud earrings.

I really don't know what jewelry she was wearing at the time of her death. I guess I've never really thought about it. :)