Roman Polanski comes home to the scene of the Murders.

A Tragic Trip to the House on the Hill. 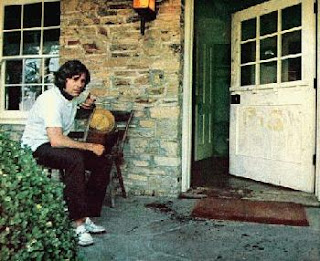 ﻿After a harrowing tour of his house, Director Roman Polanski sits on the bloodied porch, beside door where the killer scrawled "PIG" in blood.
By Thomas Thompson
Now it was quiet, and the Sunday afternoon washed by the August sun. The police had done their work and gone away and there was an eerie suspension of time and motion at the place in Benedict Canyon where the five were killed.
"This must be the world-famous orgy house," said Roman Polanski with bitter sarcasm as he parked in his driveway. He pointed to a white rail broken on the fence bordering the drive and speculated that the boy, Steven Parent, had backed his father's car into the fence in a desperate attempt to flee the bullets that destroyed him.
He walked into his yard, past the fake wishing well with the stone doves and squirrels perched on the rim, past the beds of marigolds and daisies dying from a fortnight of inattention, past the crumpled bedsheet which lay on the grass under one of the great pine trees to cover Abigail Folger in her death, and they left it there.
He walked around to the rustic swimming pool, now crowded with leaves and debris, the floats and air mattresses silently bumping into each other as a soft breeze stirred the water. "You see that big tube," he said, pointing to a transparent plastic ring. "Sharon bought that so she could prop up her big belly and float around."
The Front porch, where Voyteck Frykowski's body had been, was bad––the blood dried and darkened in a mahogany brown and strewn about the flagstones like a Jackson Pollock painting, the blood epigraph "PIG" dimming now on the white Dutch door––but the living room was the dark side of the moon. 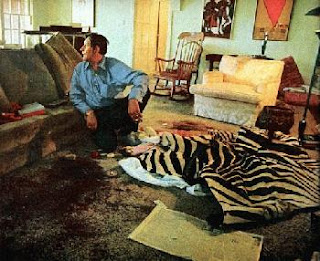 THANKS MARY FOR A GREAT ARTICLE!

"Roman learned from John Phillips, the rock composer and co-founder of the new disbanded Mamas and Papas, that Frykowski was reportedly "into a harder drug scene than just pot."

Mary thanks so much for taking the time to research this and present it. It's so great to get to read something that hasn't been read over and over. I've never seen this article.

Roman said: "I should have thrown him (Frykowski) out when he ran over Sharon's dog,"

Intersting. This statement makes me think that he was thinking that somehow it was Frykowski's fault. Not directly, but maybe indirectly, like if Sharon had never met Frykowski, or if he'd never allowed Frykowski to stay there, she'd still be alive.

I know that Sharon had told her mother shortly before she was killed that she was sick and tired of Folger & Frykowski, and had told Roman that when he got back, she wanted them gone.

On August 8, 1969, Folger & Frykowski had moved most of their belongings back into their rented home on Woodstock Drive. It was only a matter of days unti they'd be gone.

"Roman found a smashed lantern in the flowerbed near the front porch. He held it for a minute, wondering if the police had overlooked it, if it was perhaps a clue. He looked at the nail on the front door where it had once hung. He threw it back to the flowerbed."

Interesting. I'm assuming that's the same lantern that's on the left side of the door in the picture at the top of this thread. There were lanterns on each side. I don't remember the right side lantern being when the photos were taken on August 9th. Is that the same lantern? Was it knocked off by someone else?

>>>Lynyrd said: "Roman learned from John Phillips, the rock composer and co-founder of the new disbanded Mamas and Papas, that Frykowski was reportedly "into a harder drug scene than just pot.">>>

There hasn't been any real proof that Frykowski was a drug dealer, but the facts are pretty conclusive that he was into a lot more than just toking. HA HA.

"How long had Voytek and Miss Folger been house guests here?"

Lynyrd, I don't think Roman had any clue of the goings-on at Cielo Drive before July 1969.

He and Sharon only lived there briefly, in February when they rented it, and they both left the country for filming different projects.

Who would have even told him what Frykowski was up to?

Sharon didn't return until July 1969, and when she did, she told him she wanted them out. He had already told Voytek that when he got back to LA, they had to be out.

The article says that Roman felt "soft" toward other Polish people and tried to help them out. I'm sure that comes from being persecuted as a whole under the Nazi regime.

But I'm sure felt like that type of lifestyle wasn't good for Sharon or the baby.

Had Sharon lived, I have no idea how Roman would have turned out.

I read that on the last night that Sharon was in London with Roman, before she returned to LA, she had just finished the novel Tess of the d'Urbervilles, put it on the night stand with a note "This would make a great movie".

Roman saw her off the next day to begin her journey home, and he said he felt a deep sense of foreboding, but tried to blow it off, saying it was nothing.

He later made the movie Tess for Sharon.

Katie said>>>>
"Roman said: "I should have thrown him (Frykowski) out when he ran over Sharon's dog,"

Intersting. This statement makes me think that he was thinking that somehow it was Frykowski's fault. Not directly, but maybe indirectly, like if Sharon had never met Frykowski, or if he'd never allowed Frykowski to stay there, she'd still be alive".

Ironically, when Roman is questioned about motive on the lie detector...
he basically said... "It can't be Sharon... it could be Jay, or Voytek".
He does seem to mention Frykowski a lot more than the other victims.

You have to also wonder why the author of the article feels the need to explain, that Frykowski was doing harder drugs than pot.
It's sounds like an incinuation to me.
If he didn't feel it was significant, why would he mention it?