4/3/2011 12:55 AM PDT by TMZ Staff
Lindsay Lohan could soon be a famous murder victim -- because TMZ has learned she's been offered the role of Sharon Tate in an upcoming movie about Charles Manson. 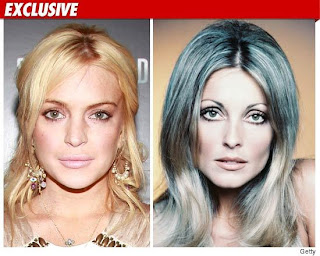 The movie's called "Eyes of a Dreamer" and is being produced by Brad Wyman ... one of the guys who did "Monster" with Charlize Theron.

The part of Charles Manson will be played by celeb photographer Tyler Shields -- whose work you might recognize -- and get this ... Tyler's directing the whole shebang.

So far, no word on whether Lindsay will accept.


Article Submitted by Katie and Mary!  Thanks Ladies!
Posted by LynyrdSkynyrdBand at 1:43 PM
Labels: Eyes of a Dreamer Movie, Movie - Martha Marcy May Marlene

Wow...
You ladies both sent me the same thread within an hour of each other!!!

You girls are faster than CNN!!! LOL

The movie, called "Eyes of a Dreamer" is being produced by Brad Wyman, who has previously worked in "Monster"... a crime drama film about serial killer Aileen Wuornos.

The role of Charles Manson will be played by celeb photographer Tyler Shields, who will also be directing the movie.

I'll be posting the thread for the book discussion shortly.

I got a bit side-tracked, but it's definitely still on the schedule.
Sorry for the delay.

Hi Mary...
Thanks for posting the lyrics.

The Beach Boys used Manson's "Cease to Exist" with modified lyrics under the title "Never Learn Not to Love".

Guns N’ Roses recorded Manson's "Look at Your Game, Girl", included as an unlisted 13th track on their 1993 album "The Spaghetti Incident".

Many folks have made quite a living writing/composing musical ideas for others.
Commercially, there's not much of a draw, for solo artists with an acoustic guitar only (beyond the 60's)... but, Manson probably could've made some bucks, relating ideas for larger ensembles.

Unfortunately... that opportunity, has come and gone for him.

I found it interesting that Gypsy, having described herself as having Jewish blood... later in the article, makes a big deal about viewing Manson as "Christ"... 2-3 times.
She was told Manson was Christ... believed he was Christ... told others he was Christ... etc.,etc.

Seems kinda weird, that someone Jewish, would place a whole lot of stock in that concept.

That's kinda like me... a Christian... following some guy around, 'cuz I thought he was Mohammed or Buddha?

Then, I answered my own question.

It also says her parents died when she was like two years old... and she was adopted.

I guess it's pretty safe to assume, under the circumstances, that she wasn't raised Jewish by her adoptive parents... even though she had Jewish blood.

Just a thought process, I was having with myself. LOLOL

Sometimes, we answer our own questions! LOLOL

Do you know if the Jewish blood was on the mom or the dad's side?

I understand that makes a difference!

I don't know about casting Lindsay Lohan as Sharon. She's seems a bit wild. I think it should be someone sweet, like Heather Graham or even Charlize Theron.

But...I really think they should cast Danny DeVito as Tex. That'll show 'im. He can be shorter than Charlie. HA HA HA.

>>>Lynyrd said: I found it interesting that Gypsy, having described herself as having Jewish blood... later in the article, makes a big deal about viewing Manson as "Christ"... 2-3 times.
She was told Manson was Christ... believed he was Christ... told others he was Christ... etc.,etc.

Seems kinda weird, that someone Jewish, would place a whole lot of stock in that concept.>>>

Yeah that's true. If she was Jewish, wouldn't she rather follow Yaweh around?? HA HA.

>>>Kimchi said: Do you know if the Jewish blood was on the mom or the dad's side?

I understand that makes a difference!>>>

That's what I've been told. But I'm not Jewish....anyone else have a take on it?

By that same reasoning, Sharon's & Roman's baby would be gentile.

Gypsy said>>>>
"I was born in the middle of the worst holocaust ever known, and I was born with Jewish blood.

My father was a Freedom Fighter in the French underground and both my parents died in the war.
(Most accounts list suicide)

My father made arrangements with a French lawyer who was secretly helping the underground to take me out of what he considered Fascist France (French authorities had helped the Germans deport and kill most of the French Jews).

When the war was over, he did just that. He found a wonderful woman to adopt me".

It seems her father's side was definitely Jewish... the mother's side, who knows.

I'm not a big fan of Lohan either Katie.

It seems her actions off-screen, are more well-known, than her performances on-screen.
(at least to me)

This is from the Jewish Virtual Library, from the Torah:

That is the old law. I think they may have gotten more lax on the subject since then. This doesn't include "reformed jews" and "inducted jews" (gentiles who have joined the Hebrew faith).

Yeah Lynyrd I wouldn't trust Lohan to star in any production. She might end up in the hoosecow and delay it. She's too undependable.

I've always wondered about that.
I mean... isn't being Jewish (in a true sense), both a religion, and a race technically?

We don't view someone who's a "Baptist" as being from any particular race, or nation... in particular.

But, to be "Jewish"... isn't that a blood issue... as the Jews themselves seem to believe, with all the lineage rules.

Can you really just wake-up one day... and decide you want to be one of "the chosen people"?

I mean... Sammy Davis may have decided to practice Judaism... but, is he really a Jew?

I mean... would Hitler have killed Sammy?? LOLOL

(Something tells me Sammy would have "re-converted" quick, under those circumstances anyway! LOL)

OK... I'll stop before I get myself in trouble.
I'm really NOT Anti-Semitic... honest.

Lynyrd, you're right. Judaism is a race, and a religion.

There are people who join that "religion" but of course, can't be part of that race because they weren't born into it.

There are "reformed jews" that have been "saved", believe in Christ, and are shunned forever by their families.

I'm not an authority on the laws of the Torah. They are very complex.

I have studied the Old Testament quite a bit, but again, I'm no "Rhodes Scholar".

Can anyone else shed some light on this subject?

>>>Lynyrd said: I mean... Sammy Davis may have decided to practice Judaism... but, is he really a Jew?

I mean... would Hitler have killed Sammy?? LOLOL>>

According to Hitler (and Charlie) Sammy would have had 2 strikes against him. LOL.

You gotta good point.
Sammy may not have been the best example. LOL

Jeez... if Hitler did consider him a full-fledged Jew... he would have had three strikes against him. : )

Lynyrd said: I mean... Sammy Davis may have decided to practice Judaism... but, is he really a Jew?

Yep, as long as the conversion study and following ceremony is overseen by a recognized orthodox rabbi. This link has more info....http://www.beingjewish.com/conversion/becomingjewish.html

Hi Stella!
Great to see You!

The site you referenced is a bit confusing.
In the section below, he/she explains in detail, how Judaism has nothing to do with race/ethnicity.

Read both artciles, and you'll see what I mean.

I think this is an issue, where we could find strong arguments online, for either side of this debate.
That seems to be the nature of the online beast.
You can find websites to support just about any notion.
Fortunately... or unfortunately, I guess depends how one looks at it.

Myself... I know little to zero about Judaism, or any religion really, other than my own.
So, I'm definitely not saying you're wrong by any means.
I'm simply saying... I haven't seen enough overwhelming evidence, on either side of this debate, to solidify an answer for myself personally.

Thanks for you input Stella!

I'm a practicing Catholic, and I'm proud of my religion.

I think religion is a personal decision, and everyone has to decide for themselves, what works for them, and what doesn't.

I think, if there is a "final judgement" (and I believe there is)... a person's actions are going to determine how they're judged... not what religion they subscribed to.

I've known some really good Catholics, and many others that I'm ashamed of.
I believe a good-living Protestant, Jew, Buddhist, or Muslim will be "saved" before a bad Catholic.
The same can be said of any religion... there's good and bad in all.

If someone doesn't believe in a life here-after, that's OK with me too.

To me... the whole thing is personal to the individual.
As my grandfather used to say it best... "everyone carries their own bag".
Meaning: When you die, you'll be accountable for yourself only.
What your friend believed... how your brother lived... or what your employer did... isn't gonna matter.
It's all mono-a-mono on that day anyway. LOLOL

I have my religion, which is dear to me... but, I'm a "live and let live" guy.
If someone was raised under a different religion, on the other side of the globe... it's none of my business... and, I'm sure God loves them just as much.

I think everyone is "Chosen".

At the end of the day...
There are no two people who believe the exact same thing anyway... even within the same religion.
Even within the same religion, everyone has their own interpretation (which is only human)... and everyone has their own persoanl relationship with God... which will always (luckily) be the case.
So, how "organized", is any religion really?

Getting back to this Jewish discussion:

In my VERY, VERY, limited research... it seems the "old school" hard-liner Jews, interpret the Torah/Talmud to the letter.
They believe being "Jewish" is about blood-line.

The "New School" folks... don't believe it's about blood-line.

I think Jennifer Esposito would be a much better Sharon Tate than LL. But she may be a bit too old.