Crazed cult leader Charles Manson has broken a 20-year silence in a prison interview coinciding with the 40th anniversary of his conviction for the gruesome Sharon Tate murders - to speak out about global warming.  The infamous killer, who started championing environmental causes from behind bars, bemoaned the 'bad things' being done to environment in a rambling phone interview from his Californian jail cell.

"Everyone’s God and if we don’t wake up to that there’s going to be no weather because our polar caps are melting because we’re doing bad things to the atmosphere.  If we don’t change that as rapidly as I’m speaking to you now, if we don’t put the green back on the planet and put the trees back that we’ve butchered, if we don’t go to war against the problem"... he added, trailing off.  Manson, who described himself to his interviewer as a 'bad man who shoots people', brainwashed members of a commune known as The Family into butchering eight people including film director Roman Polanski’s pregnant wife Sharon Tate in July and August 1969.

Speaking to Vanity Fair Spain magazine of the killing spree he led his crazed disciples on, the 76-year-old said: "I live in the underworld. I don’t tell people what to do. They know what to do.  If they don’t know what to, they don't come around me, 'cuz I'm very mean, I'm very mean".  Interspersing English with Spanish, he added: "I’m very mal hombre, nasty.  I’m in the bullring. I run in the bullring with the heart of the world.  I don’t play. I shoot people.  I’m too bad. I’m a mean guy. I’m an outlaw. I’m a criminal. I’m everything bad". He also spoke in Spanish to say of himself - "La Hierba Mala No Muere" - English for ‘Weeds never die.'

The last interview aired with the killer in September 2007 - dubbed The Mind of Manson - was a full version of the 1987 interview he gave US cable news channel MSNBC at Califonia’s San Quentin State Prison.
He told Vanity Fair Spain magazine: "You have to accept yourself as God. You have to realise you’re just the Devil just as much as you’re God, that you’re everything and you’re nothing at all.  Europe is the United States just as much as the United States is America and America is Europe".

Manson, whose new lawyer Giovanni Di Stefano recently asked Barack Obama to set him free, also had harsh words for the US President.  Describing him as a 'slave of Wall Street', Manson said: "I think Obama is an idiot for doing what he’s doing. They’re playing with him".
Other than Manson, Mr Di Stefano's client list has included defending Iraqi dictator Saddam Hussein, as well as Serbian President Slobodan Milosevic during his war crimes hearings.  Manson's death sentence for his involvement in the Tate/LaBianca murders was commuted to life in prison when California abolished the death penalty.  Since then he has attracted a number of followers because of his infamy, but also because of his perceived environmental conscience. 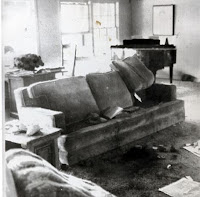 He is a founder of ATWA (which both stands for Air Trees Water Animals and All The Way Alive). It's typically manic mission statement warns of the destruction of the planet from pollution.  Another ATWA founder, Lynette Fromme, was jailed for the attempted assassination of President Gerald Ford with an unloaded gun in 1975. The claimed she did so 'for the redwoods'.
On the environment, Manson said: "Sooner or later the will of God will prevail over all of you. And I was condemned as the will of God".  "We are all martyrs.  Love is a martyr... I am a martyr.  But I am also a victim.  And I'm a performer.  I'm both.  I am everything.  I am nothing.

Well I have to agree with Charlie on the environment, we need to start saving it instead of using it up.

Other than that, as usual, he doesn't make any sense.

It is too bad that such a great and timely message gets mish mashed into the other crap going through Charlie's mind. He sounds so out there that the message gets lost. We really need to clean up our act - and it is too bad that Charlie gets it but more responsible citizens seem to overlook the obvious.

You're right, he would be more believable if he would just focus on what's important without adding all that nonsense. That makes people stop listening.

I tried reading Manson Speaks...Good Lord - I had a freakin headache 3 pages in!

"I tried reading Manson Speaks...Good Lord - I had a freakin headache 3 pages in!"

HA HA. I know what you mean! It makes my head hurt too listening to him for too long.

"Everyone's God". What does that even mean??

Why didn't he just say something like, "I can't go away cause I'm not even here. I'm a ghost of a phantom of a shadow in the heart of your children"

Forty year silence what? Charles has been talking plenty on Manson Direct, Manson Speaks, Order of ATWA, Backporch Tapes, and ATWArwithlies. Not too hard to find.

If you break it up into stanzas, like a song, it makes much more sense. Ever heard an interview w/ Jim Morrison? Yeah.

To me, it makes much more sense than politician doublespeak and corporation lies, where they will deliberately obfuscate, mangle facts, use double-speak and intentionally decompensate.

I agree.
The environmental message is great.
The rest of the double-speak, dilutes the message unfortunately.

I believe Manson sometimes "plays it up" more than usual (intentionally), depending on his mood, and who the interviewer is.
This appears to be one of those times.

I just wanted to mention:
Mary submitted this article.
Thanks Mary!

I posted the thread quickly (as I was late for an appointment), and forgot to give Mary credit.
It was an un-intentional oversight, because I was rushing.

I added her name to the thread, just now.

Thanks Again Mary!
You're the Best!

>>Pristash said: Why didn't he just say something like, "I can't go away cause I'm not even here. I'm a ghost of a phantom of a shadow in the heart of your children">>>

"Manson, give me that phone. Timmy take Manson out for a walk...he's underfoot today. Oh Louise, he's not in anybody's children, he just likes to say that".

>>>AC said: To me, it makes much more sense than politician doublespeak and corporation lies, where they will deliberately obfuscate, mangle facts, use double-speak and intentionally decompensate.>>>

AC you kill me. You will always defend him, no matter what.

I TOTALLY AGREE WITH YOU!! That's why I don't listen to the politicians either.

Charlie would fit right in on the congressional panel. HA HA.

Charlie: "If I started killing....there'd be none of you left."

AC said>>>>
"Forty year silence what? Charles has been talking plenty on Manson Direct, Manson Speaks, Order of ATWA, Backporch Tapes, and ATWArwithlies. Not too hard to find".

Hi AC.
I agree. I raised an eyebrow when I read that as well. 40 years of silence?
Manson is speaking constantly! LOL
Where have these folks been for the last forty years? Under a rock?

There were other foolish comments made in this article as well... dead give-aways... that the authors of this article, don't really follow the case.
I tried to edit-out, some of the crapola.

The article opens saying something to the effect of "Convicted murderer Charles Manson".
I edited that part out, cuz, as we know, he never actually killed anyone.
If you follow the link to the main article... that kinda stuff is in the title... the first sentence or two... and kinda throughout.

At the end of the day... it's really just cheesy tabloid, plain and simple, but it's current... so, I figured what the heck.
Staying abreast of the cheesy current stuff (and knowing it's out there)... is just as important, as staying current on the factual stuff in some ways.
It's good to be aware, this kinda fluff journalism exists.

Pristash said>>>>
"Why didn't he just say something like, "I can't go away cause I'm not even here. I'm a ghost of a phantom of a shadow in the heart of your children"

Pristash... that's from the "Manson as Lassie" video isn't it?!! Classic! LOL

I watched the interview live on MSNBC-

AC is right- he is saying the same things he always says, and even Bugs pointed out it was nothing new...

Still- it is always good to hear from the old goat himself once in awhile...

Listening to him is still very entertaining to me...

He is much like a child who has listened in to half of his parents conversation and is trying to repeat it to his friends...

He has some of the big words down, and parts of it make sense- but in the end you wonder how much of what he says- he really understands himself....

>>>He is much like a child who has listened in to half of his parents conversation and is trying to repeat it to his friends...

He has some of the big words down, and parts of it make sense- but in the end you wonder how much of what he says- he really understands himself....>>>

I think you hit the nail on the head. I've wondered myself if Charlie really knows what he's talking about. He jumps from one idea to another so quickly, it's like he's just ad libbing.

The modern global warming bs actually was copped from Jules Vernes book '20000 Leagues Under The Sea' written in 1870. Verne discusses the calamity that would ensue with Europes climate if the gulf stream changed speeds.

Climate Change is old news that is being repackaged.