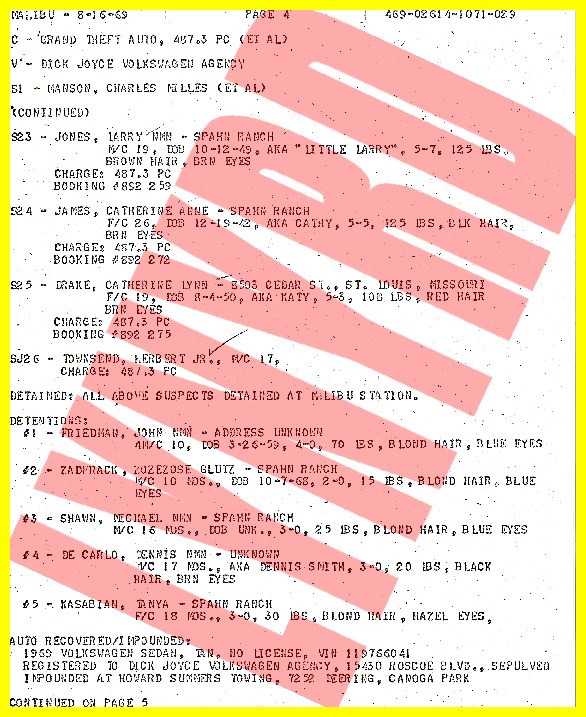 L/S- I have bad eyes, and am hungover :) Is that guy Bryn on any of these lists? is this Vera person on to anything?

If you click on it, it makes it bigger, but it's still kinda hard to read.

I didn't see anybody named Bryn on there. Does he go by another name?

Hmmmm...Sadie's baby had blond hair and blue eyes? Well, we know for sure that Charlie wasn't the baby daddy.

It seems many of them used aliases, even with the police here, so it’s confusing at best, like everything else in this case.

Bottom line: There’s a large number of names, I don’t recognize at all.
It does break-down everyone listed by date of birth, height, weight, age, hair color, eye color… if any cares to break things down from there.

The closest thing to Bryn, would be #17... On page three.
That listing could possibly be your man.

Unfortunately, his date of birth, height and weight are completely un-readable.
His entry is literally the most illegible entry of the entire 4 sheets!
It almost looks like someone obscured it intentionally.

Honestly Circumstance, I wasn’t following the conversation closely at Colonel’s at all.
I just know this incident, on this day, was mentioned several times.
I hope this helps someone.

The Names as they are Listed……

Detained:
These are all children and infants…

Leslie Sue Owens is Horseteeth. Never heard her go by that name before.

This is on the Col's site:

There's no one on the arrest sheet with that date of birth. I'm assuming he wasn't arrested that day????

Also, at the bottom of page 4 it says continued on page 5.

Lynyrd do you have a page 5? He could be on that page, not sure.

Could this #17, be the infamous "Bryn", "Brian"?
I honestly have no idea.
These folks all have 5 aliases.

As I said...
I really wasn't following the conversation at Colonel's closely at all.

At any rate...
The sheets are here for everyone, if they care to look. Informational feedback is appreciated.

This is all very intriguing...

thanks for spelling it out for me- I couldn't really read those lists...

17 sounds like the point of contention- but lets see how it plays out...

All of the Bryn stuff is new to me...

BTW...
AC, is posting on the previous thread, if anyone wants to pop-in and say hello.

Evidently, Marilyn Manson may be playing the part of Tex Watson, in this (supposedly) upcoming movie.
Do any of these movies ever, actually come-out?
I'm not a big movie-goer, but it seems for every 6 of these Manson movies they advertise, maybe one makes it to the big screen... if that.

I gotta say, if I was Tex, I'd be a bit insulted.
I mean... I'm nowhere near gay, but I've got eyes in my head.
Tex is, and was, a much better-looking man, than Marilyn Manson.

Tyler Shields is going to direct the movie and also play Manson.

>>>Shields told Entertainment Weekly that he intends to go “all the way” in depicting the visceral murder scenes on L.A.'s Cielo Drive, a crime that left five dead in what was one of the most gruesome murders of the decade.

“I want this to really hit people in a really specific place,” said the artist, who is known for his shock tactics in the fashion world.>>>

IF..this movie is made, it's going to be very gruesome.

I wonder what Polanski thinks of all this??

Every guy is better looking than Marilyn Manson. Can he even act anyway? Since this is supposed to be taking place in 1969, seems like they'd want a much YOUNGER guy. HA HA.

Why is Danny DeCarlo not on the list but his son Dennis is? There are plenty of pictures of him with his hands cuffed in the front at this raid. Curious.

Dennis Decarlo was put in a foster home with friends of our family. He was then adopted and name changed. He does not know of his birth situation. He grew up with great parents and family vacations with our family.