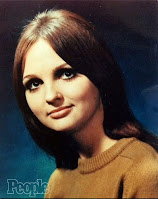 REET JURVETSON
Jane Doe #59 was identified through DNA testing as 19-year-old Reet Jurvetson. She lost contact with her family after traveling to California from Canada in 1969. Her body was found in the Hollywood Hills brush. She had been stabbed 150 times in the upper body. Due to the location, time period and violent nature of her death, investigators questioned Manson, now 81, about Jurvetson's death but learned nothing useful. The investigation remains open and ongoing.
Posted by LynyrdSkynyrdBand at 12:49 AM
Labels: Jane Doe #59, Reet Jurvetson

Sometimes you have to wonder, if the LAPD doesn't sit on such stories, and intentionally release them at "opportune" times.

If I was Leslie, I'd be extremely bummed right now...

There's nothing like finding an "extra victim" to bring the "Manson Family" right back into the public spotlight.

These fuckers are never getting out... LOL

Bruce Davis must be thrilled over this news. LOL

How did they finally figure out who she was?

It says she was identified through DNA testing.
So... we have her name and identity.

I'm still sketchy on how the authorities view the "Manson Family" as a possible (or suspected) culprit. The woman died in California in 1969. That's the only connection they've got. It's all pretty tenuous... titillating, but tenuous.

"Due to the location and the time period where Reet Jurvetson was found, and the violent manner of her death, investigators wanted to rule out any possible connection to the notorious 'Manson Murders' that occurred during the summer of 1969," the LAPD said.

Investigators questioned Manson, now 81, in prison about Jurvetson's death but learned nothing useful "and the investigation remains open and ongoing," the police department said. The LAPD asked the public to help in identifying a friend of Jurvetson known as John, or Jean.

It says her body was found "in the Hollywood Hills brush".

"An initial breakthrough in the case came when a family friend looking through a database of missing and deceased victims recognized her."

Thanks Lynyrd, I guess I missed that. I agree, I don't think everyone who died a violent death in CA in 1969 was necessarily killed by the Manson family.

I agree, I don't think everyone who died a violent death in CA in 1969 was necessarily killed by the Manson family

There has been a kind of over compensation regarding any killings that took place in and around that '69~'71 period. But it's not at all surprising given that until things started to come together after Brooks Poston spoke with Sheriff Don Ward and Kitty Lutesinger spoke with LAPD during October '69, the police missed a few blatant clues that could have netted the family even before Shorty was killed. And also during the trial period, there were, according to Ed Sanders {and Ivor Davies and Vincent Bugliosi have said similar}, so many death threats put out by the Family and even worse, the normalization of murder as a viable activity by them. So that kind of thing would make one look hard at them whenever someone died either in a similar vein to the TLB deaths or close to any of their known haunts.
I am amazed that it's taken 47 years to identify Reet though. I'm also curious as to what her family thought all these years when their family member just disappeared. The dilemmas that they must have swung through from time to time don't bear thinking about. Scarier could be the reality that the perp has been free to move about among people all these years.

It wasn't just a violent death but a death of absurd overkill.

How many murders in SoCal from 1968-1970 or so were stabbings that entailed 100+ stab wounds? I can't think very many would have been. Now, how likely is it for someone who is willing to overkill to the point of stabbing 150 times (or be one of 2 or 3 or 4 people who in total would stab 150 times) to not at some point kill again and eventually get caught for something and for something quite violent - in other words, to be in the criminal database for very violent offenses. I got to believe the killer is in the databsse and likely even for murder.

Now, how large is that database to sift through?

Man that's gotta suck to be dead all those years and your family didn't even know it because they figured you just stopped talking to them...

It was said that her family had been hearing from her periodically and then....no contact at all. You'd think that would've made them worry.

I may not have stated my thoughts well. When I said a database, I would especially wonder about the murderers convicted of other lurid overkill acts to further whittle down the pool of suspects.

I think she was found in the same area as Marina Habe, who was also a victim of overkill and reported to have been seen at Spahn as was Reet. Maybe the Family didn't murder them but I would say these victims were murdered by the same person or group of people.

I guess Bill Nelson has to be credited for this. When I bought the Sharp/Gaul autopsy and crime scene photo's from Nelson, there was a morgue picture of Jane Doe #59 included. It is the same photo the friends of Reet Jurvetson saw online. Nelson obtained these photo's by stealing them from Deemer. This photo most likely would have never been online.

In the last three or so years, I've become increasingly aware of just how many people go missing. Where I live in North West London as I'm heading into the centre of London each day, there's a couple of hoardings I pass, actually they're electronic noticeboards, that give details of missing persons. And it changes with frightening frequency. And the overwhelming majority of them are young, like under 20. I wouldn't be surprised if some of them had gone off to Syria to fight for {or against} IS or if some had been dispatched somewhere to complete an arranged marriage but they would be few and far between. We hear every so often of bodies being discovered {or the remains of them} but it seems to be a bigger happening than perhaps we give attention to.
Jane Doe #59 only assumed legendary status because of the Manson thing, partly because of the location, partly because he was known to deal with many runaways {the majority young girls} and partly because of the stab wounds. I don't know whether it was known to her family if she'd gone to California to stay or how prevalent the reporting was of Jane Doe #59 in Canada. I must admit, if I hadn't seen my brother for nearly 50 years, him having just disappeared, I'd assume either he was dead, mentally ill or had some drug assisted memory loss, a prisoner somewhere or just didn't want to talk to me anymore.

It is interesting that Reet's death occured not long after Zero's "suicide". Her family says she went to Los Angeles to be with someone named "John or Jean". Zero's name was John Phillip Haught.

There's a little tiny article in People this week. It's the cover with Prince on it.

I see 4 girls and 2 guys doing this. After some research and tapping into a feeling, I believe Madaline Joan Cottage.. AKA. Little Patty and Linda Baldwin, Bruce Davis and Country Sue Bartell Had something to Do with Reet's Death and John Phillip Haught's death. The deaths coincide with each other. In John Haughts death, The Police report only lists 4 people when a witness said there was 6-8 people there smoking hash that night and one of the chicks did it. Little Patty is mentioned in sitting beside Haught on the bed. I believe Reet somehow tied up with these people and saw something, so They killed her 11 days later to shut her up.
150 stab wounds is a good indication that more than one or 2 people were involved. Especially with the "The more you do it, the more you like it" and "Everyone has to get their hands dirty" Philosophy of the family. The police should start with Little Patty, Sue Bartell and Bruce Davis. I firmly believe the answers lie with them.