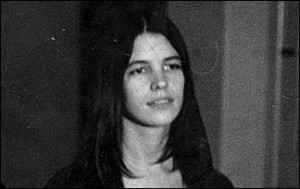 Leslie:
"I know I did something that is unforgiveable, but I can create a world where I make amends.  I'm trying to be someone who lives a life for healing rather than destruction."

"Manson could never have done what he did without people like me," said Van Houten, who has been in custody for 44 years.

After years of therapy and self-examination, she said, she realizes that what she did was "like a pebble falling in a pond which affected so many people."

"Mr. and Mrs. La Bianca died the worst possible deaths a human being can," she said. "It affected their families. It affected the community of Los Angeles, which lived in fear. And it destroyed the peace movement going on at the time, and tainted everything from 1969 on."

She said in strong terms that she had never resisted Manson's call to participate in fomenting a race-based revolution.  She said that when she heard the Manson family had killed Tate and others, she felt left out and asked to go along the second night.

Parole board commissioner Jeffrey Ferguson asked her, "You felt left out and you wanted to be included the next time, is that correct?"

"Yes," Van Houten said, adding that another of the women tried with Manson, Patricia Krenwinkel, had been like a sister to her and she knew that Krenwinkel had participated in the first round of killing.

"She had crossed the line in her commitment to the race war and I wanted to cross the line, too. ... It was something that had to be done," she said.

Van Houten said she was heavily into drugs at that time, using everything from marijuana to LSD and methamphetamines. But she said on the night the La Biancas were slain she was not on drugs.

Ferguson asked if she had any moral compunction about what she was doing.  She said she did not.

"I twisted myself to the point where I thought this had to be done and I participated," she said.Asked if she would have done the same had children been involved, she answered, "I can't say I wouldn't have done that. I'd like to say I wouldn't, but I don't know."

Van Houten has previously been commended for her work helping elderly women inmates at the California Institution for Women where she and other Manson women have been incarcerated. She earned two college degrees while in custody.

If paroled, she would be reversing a trend. Other members of Manson's murderous "family" have lost bids for parole.

The panel was also set to hear from a prosecutor and relatives of the victims opposed to parole. A decision could be made later in the day.

Van Houten has previously been commended for her work helping elderly women inmates at the California Institution for Women where she and other Manson women have been incarcerated.

Helping elderly women??? What does she think she is??? LOL.

She got old on me.

In fairness, I really don't consider someone "elderly" (in the truest sense of the word) until they're 75+... 70 minimum.

True, but most communities for the elderly start letting you move in when you're 55!

If these parole hearings take so long, they should start them at 5am.

Venus I love your new avatar! :)

Thanks, I got bored with the other one!

"I know I did something that is unforgiveable, but I can create a world where I make amends. I'm trying to be someone who lives a life for healing rather than destruction."

Wow, too bad she didn't think of that earlier. That's a far cry from "sorry is just a word".

Awesome story Bob!
Thanks for sharing!

I'm so glad your dog is home safely!

I agree.
Leslie would probably be the safest "litmus test".

Feel free to join us a couple threads up.
(New thread above)