Apropos of absolutely nothing at all.... 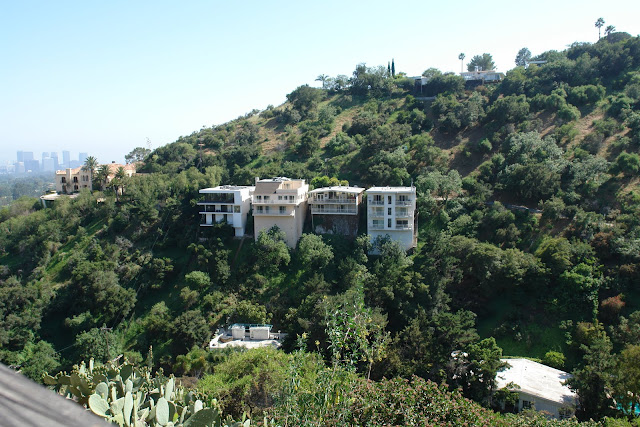 About the third scene in (right where we're getting ready for the first actual sex scene), the camera pans from a location which I can only imagine to believe is Bella Drive in LA as it shows Jeff Franklin's house (is it still called Villa Bella?) and the four houses just before it on the road leading to the end of the Cielo Drive cul-de-sac: The Kotts house, and the two not there in 1969, one being the house featured in Ghosthunters and owned by David Oman. The angle of the pan is similar to the view in the photograph linked above.

That's all I got.  Just something that caught my attention is all. Thought I would share.
Posted by starship at 4:00 PM
Labels: Alisa Statman, Villa Bella

Wow the first time I read this, it looked like Starship was speaking in the 3rd person.

'where everyone has sex but no one ever sees a penis."

There is a somewhat rare vid of one of Sharon Tate's neighbors, I think her name is Maureen Serot, apparently made not long, (maybe the next morning) after the murders.

That vid can be seen HERE.

There is also a vid of Seymour Kott. The vids don't show the neighbors houses, (or any penises), but I think I seen a vid somewhere that did show those houses, I can't remember where or what it was though.

Sunset I watched that video. You can't even hear it. Poor quality from 1969. That interviewer was WEIRD!!! The cameraman looked that girl up and down. Gross.

The amount of information that she could contribute added up to less than zero.

I guess she was just a chick that wanted on TV but couldn't decide what color lipstick to wear....

Great, even more proof that Garretson was an idiot in the purist form of the word.

And furthermore apropos of nothing:

I noticed that Alisa Statman was credited as the director of the latest episode of MODERN FAMILY. It was a very entertaining episode, and very well done. It remains one of my favorite shows. SO KUDOS TO YOU MS. STATMAN! Keep on keepin on!

Starship said: I noticed that Alisa Statman was credited as the director of the latest episode of MODERN FAMILY. It was a very entertaining episode, and very well done. It remains one of my favorite shows. SO KUDOS TO YOU MS. STATMAN! Keep on keepin on!

She is a great FICTION writer. LOL.

Well, come on Katie, let's give credit where credit is due...

Hi Starship! I hope you're doing well too!

Where is credit due? Are you talking about that TV show or the book?