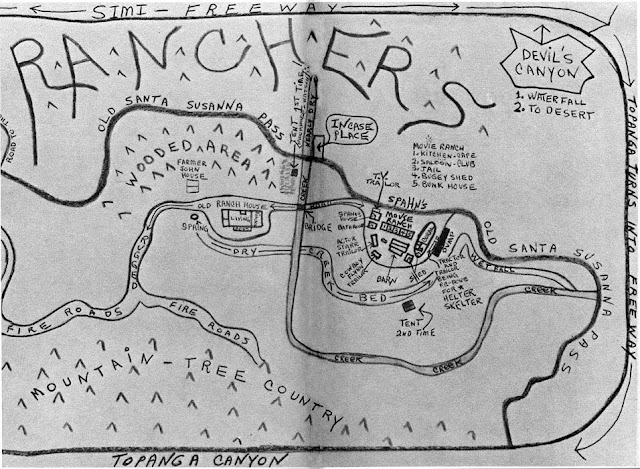 The map Charles Watson drew of Spahn Ranch depicts the horse corral to the "right" of the main street and buildings of the ranch.  Nearly every photo I've seen of Spahn's, shows the corral to the "left" of the buildings on "main street".  For Watson to draw such a detailed map of the buildings and layout from this perspective, I'm guessing he spent a great deal of time on the hill "behind" the ranch looking down on it, possibly as a "lookout".  The corral would appear on the right from that vantage point and possibly explain why his map and various photos are basically "mirror images".

A person on another blog with the user name FredCDobbs apparently went to Spahn not long after the Barker arrests.  He wanted to rent a horse and ride around and see what he could find out.  In 2009 he posted this pic: 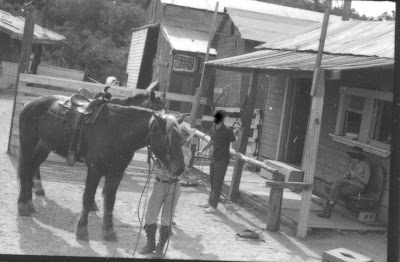 Mr. Dobbs said:
"Here’s a snapshot of Randy Starr getting my horse ready.  The guy whose face I blacked out was a friend who went with me. I can’t remember now if the girl on the right is Squeaky or some other girl who lived at the ranch. I was trying to take pictures without them knowing I was taking pictures."

Finally, a person on another blog said that Manson was "obsessed" with Randy Starr.  Apparently, Starr would practice "fake hangings" at Spahn Ranch, and it's been speculated this may have been the inspiration for the rope Watson packed into Cielo Drive: 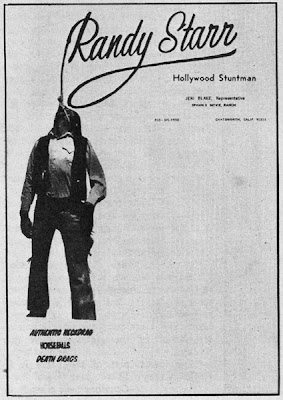 To view the map and photo(s) full-sized and unobstructed, just click on them.

I suspect the story of Manson trading DeCarlo's bread truck for Starr's pistol might be accurate. Although not period accurate for any type of historic western movie, a High Standard Longhorn was an inexpensive "plinker", excellent for target practice, and very common. My dad owned one, along with a hand tooled, black leather gun belt from Mexico equipped with a "quick draw" holster. I wore it tied down and oiled many times. Those pistols weren't designed to be used as either a hammer or a murder weapon.

IMDB lists "Randy Starr's" birth name as Joseph Randall. About the only movie credit I can find associated with his name, he was associate director on the film "The Creeping Terror". It's regarded as one of the worst movies ever. The entire film can be seen HERE. Wikipedia says " Furthermore, instead of shooting at scenic Lake Tahoe as Silliphant had intended, a muddy pond at Spahn Ranch had to do."

Randy died before he could testify against Manson. I think Bruce killed him with an earwig. LOL.

He puts: "Tractor and trailer being re-done for Helter Skelter".

How can anyone say they weren't discussing Helter Skelter....

Wow it's funny how Cat's scared everyone away. What a bunch of chickens. Buck, Buck, Buck!

Interesting video Katie. She tells lies constantly without any shame. She has admitted killing Travis but only in order to cop a battered woman plea. She still continues with the constant barage of lies that I think has wearied the jury. Even if you want to have sympathy for Arias it is difficult to do so when you realize everything she says is BS. The longer I study her the more evidence I find of her being a pure sociopath and a cackling lunatic who tries to control everyone.
the judge hinted another 10 days of trial.
jodi's trouble now is the bumbling psychologist that Martinez likes to bully.

I won't delete my comments because they are true.

It's time you knew the truth!

What is this cunt gonna do to me? Body slam me?

What the fuck is this cunt gonna do?

I ask you...What can this cunt do to me to make me stop talking?

Cats did her best to take this blog down. She's a cunt.

If that cunt managed it, the people she bullied are pussies.

I asked Lynyrd 3 hours ago to contact me. He didn't.

So here it is.

that cunt can kiss my ass. I'm going to delve into this without her crap. Bye dump.

You're trying to scare me. I won't be scared.

Oh and also I'm going to keep going on Brian's radio show and there's not a fucking thing you can do about it, so stop trying to hurt Lynyrd for that. IT HAS NOTHING TO DO WITH HIM!

It's MY decision. I will keep going there until/unless I'm told I'm not welcome by Brian. YOU can't keep me away you WITCH!!!

Okay one more thing. If Cats DIDN'T Threaten you if you posted here again, please let me know. Otherwise, I will assume that she DID threaten the rest of you.

Thanks for your cooperation.

The pot calling the kettle black that's Cats & the Colonel. Everyone knows the Colonel was a big advocate for Bobby's release saying after all he only killed a drug dealer. So why is he criticizing you Lynyrd for stating that you agree with Beckman's points on why he should be released. I think he must of forgot about all the posts he had up saying release Bobby.

The word Official doesn't mean shit on these sites. As we all know that the Colonel has been wrong before but he won't admit it.