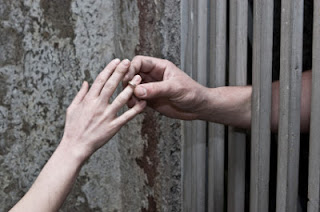 "The latest in the Joran van der Sloot media express: he has announced he is going to father a child. Evidently the convicted murderer of Stephany Flores in Peru, and the suspect in Natalee Holloway’s disappearance in Aruba, was permitted conjugal visits. Another inmate, listed as his wife, was allowed to visit".  How does this happen?

Joran van der Sloot, a media junkie, is serving 28 years in a Peruvian prison, but conjugal visits are not a thing of other countries.  Charles ‘Tex’ Watson, Charles Manson’s right hand man, married in 1979 while serving life in a California prison; Watson has fathered several children during conjugal visits.  Ted Bundy, the convicted serial killer, fathered a child during visitation with Carole Boone; he was on Florida’s death row where conjugal visits were not allowed (An officer, who was employed on the row supervising Bundy, explained to this writer: Bundy secretly ejaculated into a balloon, passed it in a kiss to Boone, who held it between her breasts as she rushed to a fertility doctor. There was no staff bribe, as long suspected). Serial killer Jeff Dahmer received thousands of marriage proposals in the mail, once he was locked away. No matter how or who, the question is: why father a child with an infamous convicted criminal?

It is possible these women want to become “famous” in their own way, have light shed on them, get their minutes of fame. With fame comes fortune, and a lot of attention. During Bundy’s trial media attention was heavily directed on Carole Boone. In the future we will see some publication attempting to get the “exclusive” on van der Sloot’s child and the mother. “Exclusive” in journalism usually rhymes with “money.” Someone who was a nobody (an inmate in a prison) is now a someone (van der Sloot’s girl).

There is also the natural lure of curiosity and thrill. These bad people are safely locked away so they can’t “get you.” They have a notoriety of their own, enhanced by the press and the curiosity seekers. People see a thrill in corresponding with murderers, rapists, and various thugs for two reasons: trying to understand the person and the thrill of communication with someone so heinous. True Crime is a popular genre and the majority of readers are female. Sharlene Martin, of Martin Literary Agency, explains, “Everyone wants to understand why unusual things occur…true crime readers …are so disturbed by the evil among us that they gain relief from seeing it made understandable…”

What better way to try to understand evil? We all have a “thrill factor” in us that is heightened by certain things: skydiving, owning a ‘dangerous’ pet, or riding roller coasters. To the extreme are those with a high thrill factor; we call them ‘adrenaline junkies.’ True Crime readers could be considered on the low factor end: ‘I want to find out from the safety of my reading chair.’ They take the step up to contacting the criminal, and then a possible visit because these criminals are master manipulators. And think of the reactions when you admit, “I’m Charles Manson’s pen pal” or even better, “I’m going to visit Charles Manson in prison.”

Then there are always those who believe the inmate is either rehabilitated or innocent. Perhaps the nurturing instinct has kicked in and the desire to take care of these inmates overshadows common sense. They believe the excuses of bad childhood, rotten legal assistance, or because the inmate is good-looking, the inmate needs them. Marrying an inmate is the ultimate power: they ask me for money, for attention, they are contained so they cannot run off, beat me, cheat, etc. Marrying an infamous inmate one-ups the power ante.

So woman killer Joran van der Sloot joins the ranks of Charles Watson, Ted Bundy, and hundreds of other infamous convicts who have fathered a child with a woman who either craves attention, is seeking a thrill or trying to understand, or is simply hoodwinked. She will claim she loves him. Mostly, she will say she sees a side to him no one knows - just as the other victims discovered."

Judith Yates, Nashville True Crime Examiner
J.A. Yates is currently completing her Ph.D. in criminal justice. A criminologist who has lectured, written, studied, and taught about crime and crime prevention for more than 10 years, she has been employed in a myriad of law enforcement jobs.
Posted by Kimchi at 11:28 AM
Labels: Charles Tex Watson, Conjugal Visits

"not really famous drunken bastid" Saint Circumstance offers his opinion why people wed and have children with infamous killers...

Cause they are not quite right in the noggin!


Wonder what Albert would say about People who support and encourage it??

Bastid.... Did you get that from Jack Kerouac? I be loving me some Kerouac....

I often have considered Cassady the torch handler from the beats to the hippies between his time with Jack and then Kesey and the Pranksters..

I wonder what bundys daughter is like,if she has a family of her own etc.
Thats a helluva legacy to have hanging over your head.

That someone would have a child or children with someone like Tex Watson (or any other notorious, heinous murderer) is a tremendously selfish act in my opinion. If these women want to marry these men, fine. Baffling choice? Undoubtedly. Distasteful? Off the charts. But the heart wants what the heart wants, I guess, no matter what I think of it. However, to then saddle the baggage of that parentage onto an innocent who had no choice, and who will be an object of scorn and derision by many, however fairly or unfairly, is tragic. I feel sorry for the offspring of these monsters - until they become adults who advocate, write letters and plead for their release. Growing up, Watson's children were probably fed an awe-inspiring amount of bullshit. As adults, knowing what he's incarcerated for, you'd think they'd want to dig a little deeper for a variety of reasons and then, hopefully, draw their own conclusions. Though I'm not sure how realistic that is - it probably isn't very.

All Things Pass
by Lao-Tzu 老子

These change
And if these do not last

Take things as they come

Leigh those are my thoughts exactly. If a grown man or woman wants to marry a convicted murderer, that's his or her prerogative, but to pass that kind of degradation onto a child who has no say in the matter is pathetic.

This is probably over the top, but I think if a convicted murderer is allowed conjugal visits, then that person should be sterilized to prevent passing that type of shame onto an innocent human being.

Jerry: Did you have make-up sex?"

George: I missed out on the make-up sex.

Jerry: Well in your situation with the long term relationship, the only good sex you're gonna have is if you get sent to prison and have conjugal sex."

is this the complete article?

Yeah... it's the whole article.

At least in the photo, the guy was just sticking his arm out through the bars at her and not another body part.

Lately we've been discussing the topic of why people get married to convicts over at Cat's lovely blog TOTLB...interesting article. Come visit :)