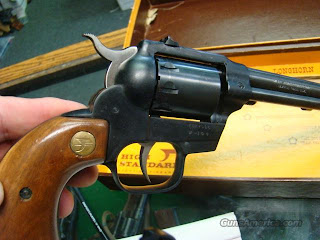 The recent pix on Cielo Drive. com of Watson's pistol prompted me to do a bit of looking.

I'm guessing within the first hours (or days at least), some of the police knew the pistol was a Hi-Standard Longhorn "Double Nine".  The large piece of broken grip found at the crime scene, appears to have the Hi-Standard "trigger" badge still in place.  The High Standard Longhorn was a very common model and a firearms expert would probably recognize it quite quickly from the markings on the small metal disc on the piece of grip alone.

"Most of the polygraph keys which could have been used were released to the press by patrol personnel prior to investigating officers' arrival on the scene, or at least without their knowledge".
Four polygraph keys that have not been released are as follows:

#2. The revolver used was a caliber 22, Hi-standard, "Double Nine" "Longhorn". The weapon has a 9 1/2-inch barrel and is 15 inches in overall length. It has a blue steel finish and a 9-shot capacity. It has walnut grips. The right grip from this weapon was broken at the scene and is in police custody. The weapon has a catalogue number of 9399."

That information may have been derived simply from the badge on the piece of broken grip, long before the rest of the gun was found.

I've included some pix of various Hi-Standard Longhorn "Double Nines", showing some of the features and markings that appear to be consistent with Watson's pistol.
The Hi-Standard Longhorn was a very common pistol with many different variations.
I read Sears had a large stake in the company and sold some models for as little as $35.

Other manufactures made similar models, it would take too long to try to contrast them here.  "Hi-Standard" is clearly visible on the pic of the pistol purported to be Watson's on the Cielodrive website, other markings are consistent with those found on other examples of the Hi-Standard "Double Nine" as well. 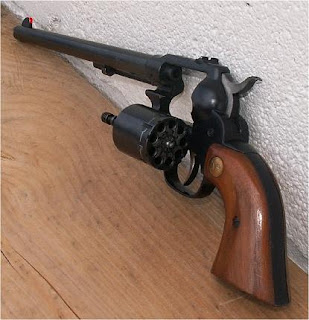 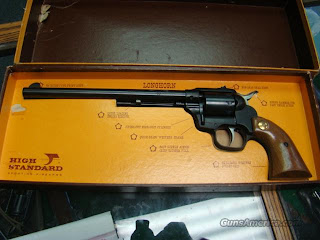 I haven't been over to the Cielo website in quite some time.
While checking to make sure our links worked correctly, I visited there.
It seems the gun's make and model are (already) clearly labebled on the Cielo website.
Well... everything but the "double Nine" part, anyway.
Is that significant?
I don't know jack shit about guns.

If you look at this link of the Longhorn 22LR it was parts 19 and 20 that got bent and wouldn't let the cylinder turn.

Here is actor Hugh Obrian from the tv series "The Life and Legend of Wyatt Earp". He is carrying a real Buntline revolver. It's quite a bit longer than the Longhorn revolver that Tex carried.

There was no Buntline used in the TLB murders. I think Buglioso just prefers a little sensationalism.
The revolver Tex used was made in 1968.

The actual model number of Tex's gun can be seen in Sunset's link above. It was a Model W-104
Hugh Obrians "Wyatt Earp Show" lasted from 1955-1961" and that show made the Buntline famous. It was the number one most watched show on tv.
The Buntline name came from wild west dime novelist and newspaper man named Ned Buntline who gave the real Wyatt Earp a special made long barrel revolver manufacrured by Colt Firearms.

If you doubt the lethality of a 22LR bullet(long rifle) watch the above video. The majority of deaths from guns are caused by the 22LR since it easily penetrates and damages vital organs. The 22LR bullet travels faster than the much bigger Luger 9mm bullet or the even bigger Colt 45 bullet.

Here's more info on the Longhorn revolver that Tex used. Click on "Western Style Revolvers" to get started.

Here's a page to see the manufacture date. The Longhorn revolver Tex used had ser# 1902705. The ser numbers and dates are sequential

I goofed earlier. It was part #s 19 and #23 that got bent when Tex clobbered Frykowski.

It is said that Wyatt liked carrying the long barreld Buntline so as to club drunken, rowdy cowboys rather than shoot them.

Here's the theme song and cast of The Life and Legend of Wyatt Earp".

Heres the theme song to Wyat Earp. It's better if you sing along with it.

Sunset in the first pic link if you get a magnifying glass and look at the top front of the cylinder you can see it is touching the frame. This is caused by the damage from clobbering Frykowski.

Here's a pic of hugh Obrian with his Buntline in the holster. The barrel touches his boot top. This is why Wyatt could never run down outlaws.

Clint Eastwood said the 44 Magnum is the most powerful handgun in the world. LOL.

On the pic of the left side of Watson's gun on CieloDrive.com, the words "Hi-Standard" are marked on the barrel. Near the cylinder, ".22 cal" can be seen. In between there is a tiny marking that may be part of the Hi-Standard Longhorn "steer skull" logo. It was an emblem of a steer skull with the words "double nine" between the horn tips. It's hard to tell from the small bit seen in the pic. However, that's where the "double nine" logo "should" be, part of it can be seen on the gun in the last pic posted at the top.

The pic of the right side of Watson's gun on CieloDrive.com shows writing on that side of the barrel. I'm pretty certain it says "Hamden Conn USA". The Hi-Standard factory was located in Hamden Connecticut for many years. Underneath the front part of the cylinder are almost certainly the serial number and "series" number.

Often Hi-Standard would make changes to the original design of the pistol. These were indicated by a new "series" number. One change I'm aware of was the original design didn't have a spring on the shell casing ejection rod in the cylinder. That meant if you pushed the ejection pin and ejected the spent casings, but "forgot" to pull the pin back toward the muzzle, then tried to close the cylinder, it left a big nasty scratch on the frame of the gun. This was modified by putting a spring on the cylinder ejection pin so it "automatically" returned to the cylinder closed position when you let go of it. This was indicated by a new series number.

Unfortunately, I was unable to make out the serial number and series of Watson's, pistol. If I had them I might be able to download the owners manual for that exact pistol, determine date of manufacture, and possibly the point of original shipment.

The cylinder release and trigger guard are damaged on Watson's pistol, also the right grip is broken. The grip pieces were found at the crime scene. I'm guessing some of the other damage may have been caused when the pistol was tossed from from a moving car.

Watson said in his book Manson was "very fond" of that pistol, I doubt if he would have been very fond of it, if the trigger guard was broken and cylinder release bent.

Hi Sunset - Thank you for pointing out that the gun is not a Buntline. Since I know next-to-nothing about guns, and because this one is so often referred to as a Buntline, I just assumed. I'll have to correct those photo titles when I have the time.

As you mentioned in your post, there is a Longhorn emblem on there, though its hard to see it on the low rez version I have posted on the site.

You are also correct about it saying Hamden Conn. Again, it's hard to see it in that version, but it actually reads..

Also, the serial and series numbers you were wondering about are

#1) THE AL SPRINGER AUDIO TAPES ARE NOW AVAILABLE AT CIELODRIVE.COM

Dallas, Tex., Nov. 12 – On Wednesday, November 12, 1969 an officer from the Venice Police Department placed a phone call to the Parker Center and asked if homicide detectives wanted to talk to Al Springer. Springer, a member of the Straight Satans motorcycle club – and friend of Danny DeCarlo – had some interesting information about a guy named Charlie and the Tate / LaBianca murder.

Sergeants Frank Patchett and Manuel “Chick” Gutierrez brought Springer to the Parker Center, sat him down in an interrogation cubicle and hit the record button.

Al Springer, 26 years-old at the time of this interview, was a member of the Straight Satans motorcycle club. Springer, who was originally from Alam, Michigan, lived in Torrance, California with his wife and kids.

Springer had first met Charles Manson a few days after the Tate-LaBianca murders, when he went to Spahn Ranch to talk his fellow club brother, Danny DeCarlo, into leaving. According to Springer, Manson attempted to impress him by bragging about the murders, saying, “we knocked off five of them, just the other night”

Deputy District Attorney Vincent Bugliosi didn’t end up using Springer as a trial witness. However, Springer did testify before the Los Angeles County Grand Jury that eventually indicted Charles Manson for the murder of Gary Hinman.

Although he was entitled to a share, Springer never collected his portion of the $25,000 reward put up by actors Peter Sellers, Warren Beatty and Yul Brynner.

Al Springer worked as a millwright for Lease Finance Corp. Co-Generation Plant in Yuba City, California. He passed away at the age of 56, at Rideout Memorial Hospital on Sunday, May 21, 2000. He was survived by his wife, 6 sons, and 9 grandchildren."

FOR ANYONE CONSIDERING SCHREK'S BOOK, THIS SHOULD BE A GREAT LITMUS TEST.

The Al Springer tapes are simply fabulous. IF you haven't gone over there for a listen, give it a go.


I agree that the interview will be a great litmus test but the beauty of the Shrek's book is that it builds on itself.

If it has an aluminum frame then it was made the same year as Tex's Longhorn. (try a refridgerator magnet)

I hadnt seen this interview with Charlie

Thanks Mr. P. I hadn't seen that one either.

Didnt watch the video but you are right. Small yet very fast moving projectile. And even if you walk away from being shot by a .22 you better get to a hospital as the lead is already poisoning your blood.

I am an avid firearms collector. Mostly WWI Allied and Axis powers firearms.
The gun used by Watson was a High Standard Double Nine model W-104.
The term Buntline applied to the W-104 models that had a 9.5" barrel due to their association with Ned Buntline and Wyatt Earp as someone explained earlier.
The term Longhorn is associated with the gun due to the steer skull on the left side of the barrel. If you know what to look for you can barely make out the "nose" of the steer in the pictures of the actual murder weapon.
The HS Double Nine, Longhorn, Buntline .22 was basically a cheap ripoff of the Colt Buntline which was a .45

Due to it's association with this case, I picked up a HS W-104 like the one Watson used. It's far from a collector's piece and I haven't yet found the walnut grips for it like the Watson/Manson gun had.

To the best of my knowledge, the Manson/Watson's gun serial number was 1902708