These items were found (by the LAPD) regarding Steve Parent: 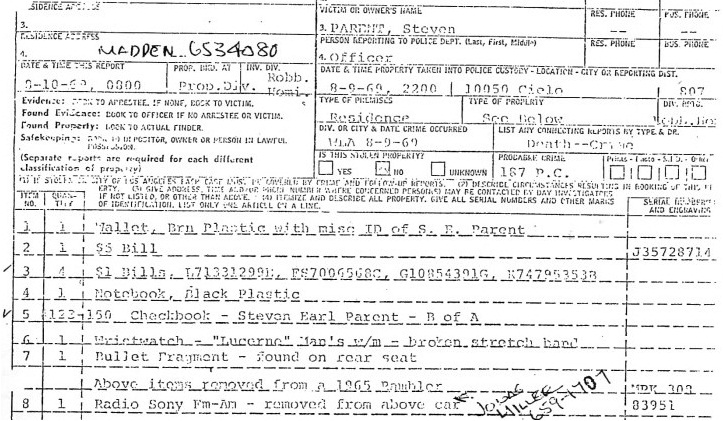 This is a Snippet.
The Full Document can be viewed on Cat's Website
"Truth on Tate/LaBianca".  View Here:
http://truthontatelabianca.com/threads/autopsy-of-steven-parent-aka-john-doe-85.2299/page-2
Posted by LynyrdSkynyrdBand at 9:02 PM
Labels: Steve Parent Property Report

If you click on the document, the obscured portions are viewable.

The numbers next to the bills, are the serial numbers from the actual bills.

The radio was on the roof of the car.
Parent was in a panic before he got to his car. He had seen the 4 dark clothed killers and the downed phone lines so he said the hell with the radio as he got quickly into the driver's seat; leaving the radio up top.

Either that or in a last dieing breath he tried to sell Linda the radio and she said no thankyou and left it on the car's roof.

Steve Parent's Dad:
>>>>>""For 12 hours, the boy’s body had lain on a slab in the coroner’s office while officials sought his identity. A 'mystery' which Wilfred Parent (Steve's Dad) now believes should have been solved rountinely".<<<<< Quote found here: http://www.cielodrive.com/archive/?p=295

Umm... is anyone thinking, what I'm thinking??

Let me get this straight:
Several ID's were found, AND a checkbook with Steve's name on it.
AND YET... Steve remained unidentified for 12 hours?

The only thing I can gather from this information, is that the police were preoccupied with "Movie Star" Sharon Tate and "Coffee Heiress" Abigail Folger... and they didn't give two shits about the dead "kid" found in the car.
Steve was obviously, their last priority.
What else can one surmise?

As Steve's dad said it best:
Steve's identity should have been solved routinely.

Let's not forget, that the automobile was likely registered to Steve, as well.
Did these cops need Steven's name stamped across his forehead to identify him, or what???

Well that answers a lot of questions, but it creates number of others.

If the police found Parents wallet with miscellaneous ID in it, why was Parent listed as "John Doe 85"? Apparently, Kasabian did not take his wallet, I'll have to watch that Larry King interview again, a bit more closely.

I just checked the full report on "Cats" site, this is really a great post thanx.

Also, apparently Bobby Beausoleil's wife died on Oct. 19, 2012. I'm not sure if they were divorced or not.

I'm pretty sure her obituary can be seen HERE.

Does it say when or where they found the Wallet?
And how would They know he was'nt someone Famous if They had no Idea who He was?

One other item caught my eye, item 47, "Rubber glove tip found by Galindo both items found in the area of Folger's body". That makes me wonder if one or more of the Manson family were wearing gloves at some point.

Sunset said:
>>>>"Well that answers a lot of questions, but it creates number of others".<<<<

My "theories" haven't been particularly accurate lately, however, here's another one.

Maybe the police "withheld" info about Parents death, even from his family. If the police found Parents wallet in his pocket, or in the Rambler, at least some of the police had to know who he was. Probably, within the first hour or two of entering the property.

They had a crazy murder scene, they arrested Garettson, and they may have wanted to investigate who Parent was, what his connections were etc., before they released the info that he had been found dead. They may have thought Parent was some type of "big time dope dealer", and they might be able to locate his contacts before they realized Parent was dead and fled.

After a number of hours, the police may have realized his family would be looking for him, and they may have thought it "better" if they were informed by their priest instead of a cop coming to the door. I don't know if the police notified the priest, or if the family asked him to go look at the coroners. Maybe the priest, when he found out Parent was missing, decided to look at the coroners on his own.

it's possible the police may have thought parent was somehow involved in the murders, especially while they were suspicious of garrettson, and for some reason was murdered by his crime partner(s).
i've heard four different versions of how parents family found out about his murder---the police told them, the priest told them, a police officer came to their and gave mr. parent a business card and told him to phone the number-he called it was the morgue, and the parent family was watching the news and the car and a draped body.

Why didn't Wm Garretson ID Steven Parent? He had ridden in Parent's car. He had seen Parent the night before.

Good comments everyone. Lots of questions.

I don't know why Garretson didn't ID Steve. I know they asked him and he said he didn't know. You would think since he knew his car that he would be able to say who he was, but his brain was scrambled. Or maybe it was shock.

If they didn't take the items from his car until 2200 hours, then I'm assuming they just dropped Steve in the meat wagon, and then went much later to try to ID him. As Matt said, how did they know he wasn't famous. I'm assuming it's because when Roman's partner showed up and ID'd the others and said he didn't know who Steve was, that he wasn't important.

Wasn't important. That's sad. He was important to someone.

I hope everyone on the East Coast stays safe tonight. I know that the wind is getting fiercer and it's raining a lot. I hope no one loses power. Be safe! :)

I have to wonder how none of the police weren't demoted or fired.
Parent was the easiest to ID since he was sitting in his own car.

There must be a dozen instances in Helter Skelter where Bugliosi mentions instances of lazy detective work. Bug would get very POd at the two detectives. Exasperated may be a better word.

Thank god for the couple of cops in Inyo County. It was them who captured Charlie. The LASO couldn't catch Charlie even when they used 75 officers and a helicopter.

Whenever I read about a new serial killer I have to wonder if that type of criminal exists due to lazy and incompetent law enforcement personel. Generally it's the large police forces that decay to the point that they are just another dime a dozen bureacracy with staffers waiting on their pensions.

(1) from the prior thread, re why those in the house might not have heard the gunfire: acoustic shadow.

"An acoustic shadow occurs when sound that would normally be heard is blocked. This can happen because the sound is absorbed by some material, or refracted when it meets a warm or rapidly moving layer of air."

Consider that Tex may have managed to fire the .22 pistol inside the car window, and so the sound waves going back towards the house would be met by the rear portion of the car's interior. Then consider that if the front door and windows were closed any sound waves would also have to go from traveling along the side of the house into an open window on the side of the house. Tex says:

As I lunged forward the boy cried out...

Re the neighbors, recall that they would be down the street, the same direction as the open car window, so not the same barrier(s).

(2) the fence. Why posit any fear on the late Mr. Parent's part? Recall Garretson saying that he gave Parent a beer. Now posit Parent being a "lightweight" drinking the beer on an empty stomach. So may have simply been a little tipsy. And maybe also not so happy that he couldn't sell Garretson the clock radio (i.e., also a little generally distracted owing to his wasted trip).

Also, while humans are sometimes something other than rational, the worst thing to do if Parent sensed any danger would be to have to hit the gate button and then wait for the gate to open. Better to simply get out of the car and haul ass in the other direction. Screaming all the while, so as to alert anyone within earshot that all is not well on Cielo Drive. Well, screaming if he knew that he had been observed. If not observed, the quiet escape, but if observed, might as well scream and run (not only might alert some others, but also gives Tex & Co. something to think about as well).

Sorry, almost forgot, re the gunfire again, also don't know the wind pattern, what with the house being in a canyon, the shape of the house in relation to where the shots were fired, etc., so cannot say whether they might have been any rapidly moving air running from the back to the front of the house, to keep the sound waves from moving from front to back.

Does anybody know if Katie has electricity after the storm?

There are some questions about why nobody heard anything. Thanks Res, Bobby & Mr. P for the comments.

I know I make comments left and right, but I'm going to cut down on them. Not going away...just cutting down. LOL. I have a lot of things to take care of. Peace!!