If any bloggers want to videotape themselves performing a one person Manson play... this is your chance. LOL
You can now order a kindle version of Ian Fraser's
"one man Manson play" on Amazon for $2.99. 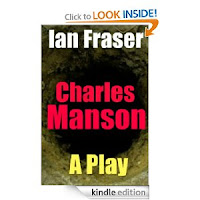 This is the theater script for Ian Fraser's critically acclaimed one man play on Charles Manson.

"Hypnotic and Chilling!" THE CITIZEN

ABOUT THE AUTHOR
Ian Fraser is a multi-award winning playwright and author. He grew up in South Africa. Penguin Books published his autobiography, dealing with his army experience under Apartheid. His work was nominated for and gradually began winning most of the South African theatre awards. For a decade, both his solo comedy and dramatic works staged by various Arts Councils won awards and broke box office records at the Grahamstown Festival, Africa’s largest Arts Festival.  He relocated to the USA in 2006, and is now a naturalized US citizen. Since arriving, his work has been staged in Wisconsin, Florida, Scotland (in the UK), and in 2009, by Brown University.

For further purchase details on Amazon:
http://www.amazon.com/Charles-Manson-ebook/dp/B007UIWI4Q#reader_B007UIWI4Q
Submitted by Katie!  Thanks Katie!
Posted by LynyrdSkynyrdBand at 11:04 AM
Labels: Ian Fraser's "One man Manson play"

I've seriously seen it all at this point.

The whole concept seems kinda ridiculous to me... but then again, the author does have some impressive credentials and is backed by Brown University... so who knows?

Send your completed performance to LSB3, and we'll post your videotaped "one man play" immediately! LOL

Listening to Charles Manson speak for more than 5 consecutive minutes can result in "brain-warshin'". LOL.

Actually this looks kind of interesting. :)

This is my thought process:

go walking in my sleep From the mountains of faith

I must be looking for something

Something sacred I lost

But the river is wide And it's too hard to cross

I go walking in my sleep

Through the valley of fear

And I've been searching for something

Taken out of my soul

Something I would never lose

I hope it doesn't take the rest of my life

Until I find what it is that I've been looking for

Through the jungle of doubt To a river so deep

I know I'm searching for something

I'm not sure about a life after this God knows I've never been a spiritual man Baptized by the fire, I wade into the river That runs to the promised land

Through the desert of truth To the river so deep

The end of that video is Goodnight my Angel.

It is my lullaby to my son...
http://www.youtube.com/watch?v=BmBMqJ9-q9A&feature=fvst

Goodnight my angel, time to close your eyes

And save these questions for another day

I think I know what you've been asking me

I think you know what I've been trying to say

I promised I would never leave you
Then you should always know
Wherever you may go, no matter where you are
I never will be far away

Goodnight my angel, now it's time to sleep

When we went sailing on an emerald bay

The water's dark and deep, inside this ancient heart

You'll always be a part of me.

Goodnight my angel, now it's time to dream

And dream how wonderful your life will be

Someday your child may cry, and if you sing this lullaby

Beautiful, your child would be so happy to hear these words :)

I think William Shatner would be the best One Man play performer on this one....

Hi Purple... welcome to the blog.

I'm sorry it took your comment so long to post.
I'm having an exceptionally busy day today.

Dill, good suggestion. What about Johnny Depp? That guy can play anything.

Hey Dill, did you know that the mask Michael Myers wore in Halloween was William Shatner's face? LOL.

Did everyone know that Roman boinked the girl on the left. She will be nameless, because she doesn't even matter. She was only in the band because of her husband.

She played the tambourine. Big fucking deal. A monkey could do that.

Mama Cass was the only female talent in that band.

Sharon found out about it. She was pissed off. Can you blame her?

This is the song that got me itching for California....

I gotta go with Joe Pesci.

I think Joe Pesci would ROCK as Manson... for this one-man play!

Purple, I'm not familiar with Cilla. Is that an English singer???

I found where Paul McCartney sang one of her songs, Step Inside Love.

That's as far as I can go tonight. I'm bushed.