"On March 20, the Spring Equinox 2012, the title music for 'Lucifer Rising And Other Sound Tracks' will have its premiere and release.  The title music, along with other musical pieces recorded at my home studio in the early Seventies, have been revisited, remixed and released for the first time.  This is a musical diary of avant-garde compositions and experiments, one of which was to appear on the film 'Lucifer Rising'.  The collection has been exhumed and is now ready for public release.  This will be available exclusively on [JimmyPage.com].  There will be a standard release on heavyweight vinyl.  In addition there will be a special run of 418 numbered copies. The first 93 copies will be signed and numbered.  There are liner notes and commentary to each track. 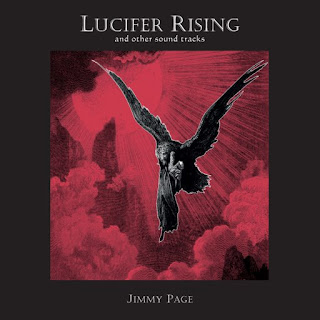 I picked-up a clear blue vinyl bootleg of the Lucifier Rising Album in Providence, back in the 90s. The front cover is a picture of Jimmy Page and Aleister Crowley, so I took a pic… thinking you might want to add it to the thread. I also have the original mix on CD if you're interested… I can send that as well! 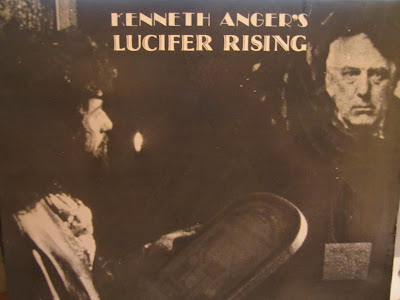 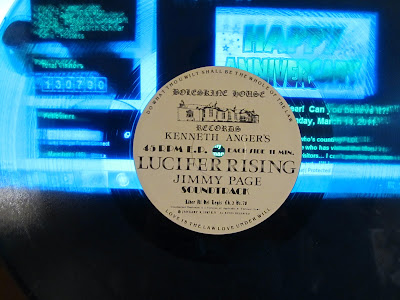 The Blue Vinyl Album.
If you enlarge the vinyl album photo, you can see the blog, in the reflection! LOL

Please "Click" the photos to ENLARGE.
Especially the second one... it's intense!!!
Thanks MattP!  You ROCK Big Time!!!
Posted by LynyrdSkynyrdBand at 9:19 PM
Labels: Jimmy Page's Lucifer Rising Album

Has anyone else noticed, that the comments section is working normally again!

I'll check further into it tomorrow. :)

Several Led Zep albums had those strange occult symbols printed on the covers but I never cared to find out what they signified in the least. Page has long been fascinated with occult stuff and Alister Crowley. Rock bands are always doing wild stuff as part of the rebellious and wild personna surrounding rock and roll. It's all pretty harmless because the music is youthful and party oriented. Yet I'm still surprised though that Page would want to dig up this old stuff since I can't see anything positive coming out of possibly letting the public think that Page was connected with Bobby Beausoleil's satanic worship bent. I don't even understand why Beausoleil still to this day worships satan but yet still shows up at parole hearings thinking the parole board will release an inmate covered with satanic tattoos who was a buddy of Charles Manson. I get the feeling that Beausoleil hasn't learned one damn thing about how he ended up in prison for murder. And not just any murder either. The Hinman murder started the Tate-Labianca-Shea massacres. Why would Page want to link himself with Beausoleil in the year 2012?dea Has Jimmy Page gone off the deep end?

Mr P.'s right that Page has never hidden his interest in Crowley/Thelema. He even owned Crowley's former cottage at Loch Ness for 20 years, Boleskin House (and even featured it in Led Zep's The Song Remains The Same movie).

So, obviously he'd have been interested in hooking up with fellow Thelemite, Kenneth Anger, to re-do Beausoleil's soundtrack to Lucifer Rising.

So, there we have a degrees-of-separation link between Manson, Beausoleil, Page, Anger and Crowley. Not to mention other well known central & fringe players in this sorry saga (Tate, Polanski, Folger, Nixon, Cass, Neil Young, Gerald Ford and so on). No wonder that so many people get interested in the TLB case. It's a real pop-culture phenomenon.

It's easy to imagine that CM would be interested in learning about some of the tenets of Crowley/Thelema, to add to his pot-pourri of manipulation techniques, along with a pinch of Scient0logy and bits & pieces from other cultish operations.

And, the Led Zep link continues with little Lynette's unsuccessful attempt to contact Page on the Bands' 1975 US tour, apparently to warn him of "bad energy".

As for Bobby, I think the key to understanding him is that he genuinely feels that he is a proper musician and is constantly hankering for recognition for his music, over and above his infamy for the Hinman crime. I've only heard bits of his music & haven't been struck that it is particularly noteworthy.

MattP...
You've been officially added to the Staff List, at the top left corner of the blog.

Your official title is "Audio/Video Specialist".

Folks...
Join me in welcoming MattP to the administration list!

The Blue Vinyl was the clincher! LOL
That album reminds me of my old J.Geils album "Bloodshot", which is Red Vinyl!
Classic stuff... it gets me every time!

Hi Matt! Thanks and welcome aboard!! I'm finally not the low man on the totem pole anymore. HA HA.

i'm told this vinyl is worth a few bucks.
a little note on the back sleeve says this copy is 'qabalistic issue number 547'
i tranferred it to cd a long time ago and i've got to say outside of my jonestown stuff its probably the creepiest cd i own!
hopefully they won't change much when its remastered and cleaned up.
i've always been partial the colored vinyl stuff
my favorite is my sgt pepper picture disc,still got the pricetag on it
i bought it for 4.99 in the late 70s....my how times have changed

for anyone whos interested the film invocation of my demon brother starring bobby beausoleil can be found here
http://www.dailymotion.com/video/xdzk9k_invocation-of-my-demon-brother

Here's a stupid question, that crossed my mind, while posting this thread...

Mind You...
I know nothing about occult stuff.
Crowley, LaVey, Anger...
It's all Greek to me.

The only thing I know about these cats, is they feature beautiful nude women in many of their photos. LOL

Posting this... I thought:

When Ozzy Osbourne sang that freaky song "Mr. Crowley"... was he talking about Aleister Crowley?

Just a thought that crossed my mind...

How many famous Mr. Crowley's can there be?

I think it's pretty safe to say, you're right Matt! LOL

Mr. Crowley, what went on in your head
(Oh) Mr. Crowley, did you talk to the dead
Your lifestyle to me seemed so tragic
With the thrill of it all
You fooled all those people with magic
(Yeah)You waited on Satan's call

Mr. Charming, did you think you were pure
Mr. Alarming, in nocturnal rapport
Uncovering things that were sacred, manifest on this earth
(Oh)Conceived in the eye of a secret
Yeah, they scattered the afterbirth

Off subject for a minute, I'm re-reading The Black Dahlia, and it's describing Los Angeles in the 1940's. It's interesting reading in that regard, much like LA in the 60's where recording stars and movie stars were hanging out with lame-ass hippies, in the 40's it was mostly mob-oriented, with the rich and famous hanging with them. Most of the reason for this is because the money, power & gambling were controlled by the mob, ergo to "buddy up" you had to join in.

It mentions several murders of stars such as Thelma Todd & Paul Bern (both of which were deemed suicides but the autopsy showed on each that this was a wrong conclusion) and a crooked DA who was in the mob's pocket.

If you'll remember, Paul Bern is the guy who built the house that Jay Sebring bought.

Anyway, it also mentions William Randolph Hearst, who of course had more money than Yahweh, and his castle in San Simeon.

I visited that castle twice and during one tour, we were told that when Hearst invited you to a party at his castle, you accepted the invite whether you wanted to or not...because the penalty for not accepting was that you would never work again...and this even went for Clark Gable and Carole Lombard.

The book describes a lot of hang-outs in LA in the 40's, some of which you Californians might recognize.

Thelma Todd's Roadside Cafe on the Pacific Coast Highway, her body was found in her Lincoln in a garage behind it.

The Florentine Gardens on Hollywood Blvd.

Bugsy Siegel's Linden Drive Mansion where he was shot dead on his couch reading the LA newspaper.

The Clover Club on Sunset Blvd. near La Cienega. Bugsy lived near there.

The El Palacio Apartments in West Hollywood where Georgette Bauerdorf was found dead in the bathtub.

The Brentwood home where Mickey
Cohen was living that was bombed.

Sherry's Bar on Sunset Blvd where Micky Cohen was almost gunned down before testifying to the grand jury about police corruption.

The Manson saga has twists & turns, but "Hollywood & Vine" has had its stories for years!!!

The younger cats are, the more they go after critters.

Tonight I saw my oldest cat go after a baby snake.

Now mind you, I'm aware of snakes, and I know a baby rattler when I see one (yes we have rattlers in Texas), and a baby rattler is more poisonous that the mother, but I knew this was a harmless grass snake and I watched her play with him.

She just let him go, which is okay. This was just a grass snake which is beneficial to the environment.