She was one of the world's most beautiful women, savagely murdered at the hands of Charles Manson's evil family in 1969.  Now the engagement ring that belonged to actress Sharon Tate is at the center of a firestorm of controversy.  The ring is being auctioned off at a memorabilia store in Manhattan. The ring was given to her by director Roman Polanski and the opening bid is $10,000.  Now the auction company Gotta Have It! is being blasted for selling one of Tate's most treasured possessions.

Adam Bardach is the son of Tate's best friend, Judy Dreszner. He says his mother, a former fashion model who died last year, was given the ring by director Roman Polanski as a treasured memento shortly after Tate's murder.  "It's disgusting to me that people are attempting to profit from such a tragedy," said Bardach.


But somehow the ring wound up in the hands of another woman, Suzanna Leigh, another of Tate's friends who starred with Elvis Presley in the 1966 movie Paradise, Hawaiian Style. She's the one now trying to auction it off.  In a sworn 2006 affidavit, Judy Dreszner said, "Suzanna Leigh stole the ring from me in 1989."   Dreszner said she gave it to Leigh to be appraised and never saw it again.  "It was never intended for sale. This is a private symbol of my mother's friendship with Sharon Tate," said Bardach.  Suzanna Leigh denies stealing the ring and says she's the rightful owner. 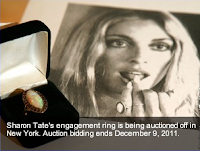 
"Was this the ring she was wearing when she was murdered?" asked McInerney.  "Oh no. I don't know anything about that. I think the only thing she was wearing was her wedding ring," said Peter Siegel, President of the auction company.  Bidding for the on-line auction ends on December 9th.
Posted by LynyrdSkynyrdBand at 8:30 PM
Labels: Sharon Tate

Also...
It seems a bit weird seeing "Peter", hold the same ring (in photo #1)... which is pictured on Sharon's lovely finger in the bottom photo.
The ring sure seems to "suit" Sharon much better! LOL
I'm not sure I could by jewelry from that guy.
AHahahaha

It's funny that Judy Dreszner's son is saying that Roman gave her the ring. The auction company already posted a "letter of authenticity" from Roman saying he gave it to Mrs. Gutowski.

I've read most everything about Sharon Tate that I could get my hands on, and I've never heard of this Judy Dreszner. I thought Sheila Wells was her "best friend".

Now we have another "best friend" who stole the ring, and is putting it up for auction.

This mess stinks like a fish...from the head down.

Is there anyone else, just hoping this f#ckin' ring will sell, and disappear, already!! LOL

I'm so sick of doing threads on this freakin' thing.

Every time I think it's FINALLY OVER... the Saga CONTINUES!

This story, is like the ex-girlfriend in college, that just won't go away!
LOLOL

I'm not sure I could "buy" jewelry from that guy.

Lynyrd said: This story, is like the ex-girlfriend in college, that just won't go away!

Okay that's another story we should perhaps hear. HA HA.

Boy this italics thing is a pain in the butt!!!

Lynyrd check your e-mail. I sent you something I think you'll find interesting. :)

That's a tough one, do i get Season Tickets for the Jets games or do i buy the ring?

I might have to give this one some thought.

Sell the dsmn thing. I tire of wet blankets telling others what they can't do.

Jimmy, that is a tough decision. Pay $10,000+ for a stupid looking ring that's too big to even bend your finger if you have it on, or remodel my house.

I'm guessing that Judy Dreszner was married to Gene Gutkowski. Maybe he's passed away and she remarried? Or they divorced and she remarried? I can't remember for sure, but wasn't Gene Gutkowski's wife named Judy? If so, that'd explain the confusion as to the name. Now, my big question is this: if the ring was stolen from this Judy person by Suzanna Leigh, why weren't charges filed? Also, why was Suzanna Leigh asked to get an appraisal? Couldn't Judy do it herself? Something's really weird here.

Hi Venus. I agree, there's something really wrong with this picture.

Maybe this Judy is/was Gene's wife, I don't know, but I agree, why didn't she just get an appraisal herself? And if she feels that this Susanna stole the ring and is now trying to auction it, you'd think she would file charges now that she has proof of who has it.

gene gutowski was married to a woman named judy and she was very good friends with sharon tate. i believe the ring was givn to her as polanski gave all of tate's things away--he gave her ferrrari to her father.

I thought he looked a bit like Cheech Marin......

Dilligaf, I was thinking the same thing!!!!

Hmmm, I think Roman is creepy for giving all of Sharons possesions away. If he was in love, you would think he wouldn't want to part with anything belonging to Sharon, friggin pedophile creepy little man