Some New Black and Whites Shared by Backporch Tapes
As Always , "Click" to ENLARGE 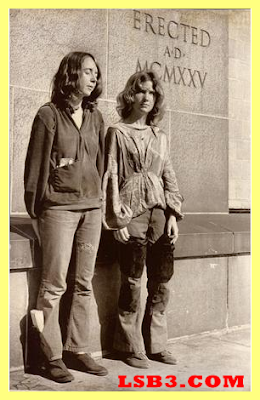 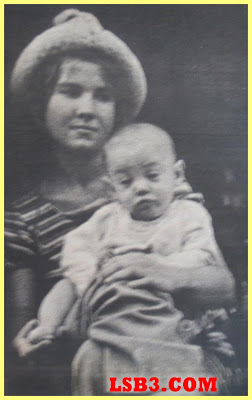 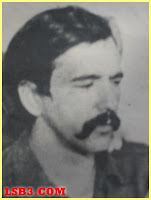 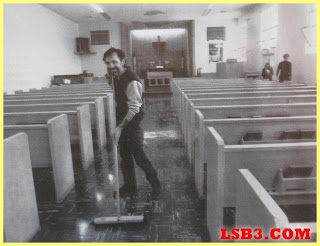 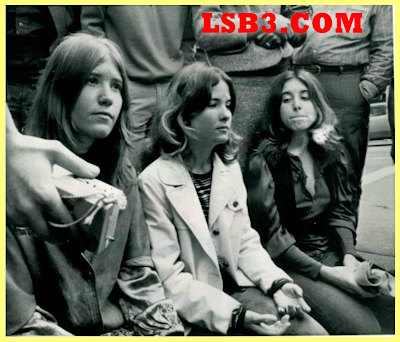 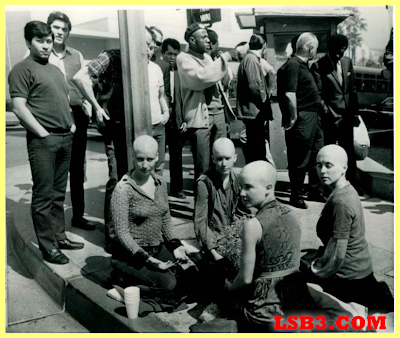 There is alot of material here and I don't even know where to begin.

Number one, How did that photographer get Squeaky and Sandy to pose under the word Erected?

Number two, I like bad girls, but even I have enough sense to let alone these two. There is crazy bitches and there is batshit crazy bitches.

I'm just getting warmed up, before I get to the goofy looking baby in picture number two.....

Future generations are going to legislate who is allowed to pro-create with who. And good for them.

How many people do you need to incarcerate or institutionalize before you get a clue?

I guess next I have to comment on the dog trying to hump Gypsy....give me a moment.....

A bad sperm meets a bad egg= not good.

"ERECTED"!!
AHAHAHA
Good one Tom!
I didn't even notice that!
You definitely have the eye!

But, the baby... I must say... I picked-up on that situation right away.

Honestly Tom... and this is the ABSOLUTE truth...

I thought to myself, (as soon as I saw that baby):
"Damn... I can't believe I'm about to have a negative thought towards a baby... but that kid looks BLASTED"! LMFAO!

That kid is definitely ON something! LOL

I guess Charlie lied to Dianne Sawyer, when he said:
"I ain't no choir boy woman!" hahaha

Turns out, he IS!

1st pic: scuggly. I didn’t know there was that ugly of a picture of those two.

2nd Pic: I agree with Tom, ugly people shouldn’t be allowed to mate with ugly people. It produces an ugly swabling that people have to wince when they see it.

3rd Pic: It looks like Gypsy was “in heat”, and even the dogs couldn’t resist. Although the result was the same. She dominated him into submission.

4th Pic: Some ugly guy with a mustache.

6th pic: Everyone sitting around and saying “yup!!”

7th pic: a bunch of dumbasses sitting around and saying “huh???”

"There is alot of material here".

"and I don't even know where to begin".

Bottom picture, that girl on the left, is that Cappy?

Her boobs look like overgrown pimples. She needs a training bra. HA HA.

Picture #6: Is that Brenda on the right looking like she's either gonna blow beads or tell Sandy to fuck off? HA HA.

I thought Gypsy was the girl approaching the dog (from behind), wearing the hat... and the girl getting humped was unknown.

But, I could be wrong...
It could be Ouisch approaching wearing the hat... and (Tom's right) the girl getting humped is Gypsy.

It appears to be "Little Paul Watkins" and Nancy Pitman in the back.

The little joker furthest back... who knows?

The "moustache guy" is Danny DeCarlo... (unless I'm losing my mind, and there's someone else who looks just like him).

I thought it is Gypsy, Ruth, Paul, Nancy and Cappy.

"I thought it is Gypsy, Ruth, Paul, Nancy and Cappy.

That looks about right.
It looks like Gypsy and Ruth.
It's definitely Paul and Nancy...

How you can identify the last person as Cappy, is beyond me though...
But, since I have no idea myself, I'm not going to argue.

Any help from the audience?

And I think Charles Manson's actual quote to Diane Sawyer was;

That's not of my business woman. I'm a ganster. I'm an outlaw. I'm a convict. I'm not a Sunday school teacher.

The man could turn on when the camera was on. Give him his props.

You're right Tom...
It was "sunday school teacher", not "choir boy".

He still lied though...

He's an interesting little dude and probably just a criminal and not the face of evil that he has become. If given the chance, I would like to have met him.

Charlie Manson sweeping center aisle of a chapel.....he looks like he gets the joke.

Charlie didn't understand how things work in 'martini land', but he does understand what things mean to people. And the human need to believe in something to stay strong.

So he is an idiot, but an idiot with a smile. And a twinkle in his eyes.

That "Simi Valley Sherry" and "Danny Decarlo" video is already on the blog.

It's listed in the index under both names.

I'm starting to think making that index, although colorful and eye-catching... was a waste of time. LOL

Well off to more interesting subjects, like watching the inside of my eyelids. HA HA.

I guess she doesn't want to hear my comments on picture # 6.

That Nancy Pitman was just a flat out badass.

i think the girl being humped is susan bartell or she could be gypsy.

’How strong are you? Do you have a pair of good shoes, a warm coat or cape you could sleep in, a knife and a small pack? Are you ready to survive?’’
Lynette Fromme.
There are more guts in Fromme than in any of you guys that just making fun of the girls!

TomG said...
That Nancy Pitman was just a flat out badass[end quote]

No kidding! By age 15 she was incredibly militant. I think she was a sociopath by nature. She'd fit in with a den of rattlesnakes.

My god that is one butt ugly looking child!!

>>>V717 said: There are more guts in Fromme than in any of you guys that just making fun of the girls!>>>

Yeah, she's real tough...making empty, useless threats to a camera to try and get her hippy cult leader out of prison. LOL.

Top picture...it looks like Squeaky & Sandy are contemplating jumping off a building.

Too bad they didn't. LOL.

It looks like those two got what was on the bottom of the used clothing pile that day. HA HA.

Any of the following should be considered plausable,

A signed confession from Charlie.
A love letter from the Bug.
An application form for the local McDonalds.
An early draft of Susan Atkins memoirs.
A presumed long lost recording contract signed by Terry Melcher.

A death threat letter for the President!

Look at Charlie's "shit-eatin-grin" in that photo!
LMFAO!

That dude is a complete trip!

You can say what you want about Charlie... but, he definitely has a GREAT sense of humor.

Sweeping the church floor...
I'm sure even HE can see the irony in that photo.

"Never leave home without it". LOL

Squeaky and Sandy (in photo #1), look like they're standing on a ledge (7 stories up), and about to jump. LOL

"A Last Will & Testament, bequeathing her watch and driver's license to Berkeley."

There is the determined Squeaky; the Family's ever vigilant leader determined to free Charlie with daily press statements that never acheived anything. Gypsy used to call the ocupying of the corner by the Family, "that corner bullshit"

How Sad - Oogling over pictures from the digital outhouse?

I guess that's all that's left of this nonsense now?

Here's another look at how sleazy hollywood uses actors to depict ordinary citizens in daily news reports - More Fraud and Lies coming from the media:

We're living in a mind control sesspool where the average person has become too stupid to see the truth in anything.

But that's okay. Just keep Oogling at pictures of young girls who have now grown very old and of old news clippings of places that no longer exist or of people who have long since passed away.

Here's a newsflash for you ... NOBODY CARES ANYMORE.

You've milked this cow for the last 42 years for all it was worth, but it's OVER.

It's like Manson once said, "All of those people who've been play acting me will one day wake up and realize that they've been played by themselves because we each get the man in the mirror" or something to that extent.

If you want to Oogle at some cool pics, get a copy of Robert Hendrickson's new book. At least you're getting them from a respectable source.

Skynyrd, do yourself a BIG favor and cut the umbilical cord that you have connected to the Digital Outhouse.

If you associate with filthy dogs, you have a good chance of catching fleas.

If you want to learn anything about Manson, talk to Star. She's the only one who can give you a REAL perspective of what Charles Manson is like today.

The Digital Cult Leader is no longer a part of Manson's scene.

As for these dingy old pictures that you shamelessly put on display, they're nothing special.

This isn't the Guggenheim museum, nor is this a fancy Soho-Type Gallery since the quality of the exhibit is low-grade material at best.

Sharon's ring was interesting, and i have seen that before, but these sad old pictures are a waste of space.

You're blog is going bohemian in it's style.

If you think it's so pathetic Nimrod, then why the hell are you here?

Notice how the interviewers eyes start glossing over.

Jim...
I made a new thread, in response to your post.

Take it all with a grain of salt V717.
We're just joking.
I actually like Lynn a lot.
In fact, Lynn's my favorite of the whole group.
I'm glad she's doing well.
It's all in good fun... no harm intended.

Lynyrd how do you know Fromme is doing well? have you heard something? Are you holding out on us? Share! Share!

I have nothing specific...

As everyone knows... she's not in prison any longer, and living in the Marcy (Upstate) New York area.

She looked great in the Wal-Mart footage. LOL

Sandra's baby "Ivan" looks like Manson, in my opinion.....

Where was the photo of Manson sweeping the floor taken....I have an original photo of Manson and Watson in a bowling position in front of the alter. Nice original, on kokak paper. Looks like they are bowling for souls. Tommy

Thanks for visiting the blog!

Honestly...
I'm not sure where that photo was taken, of Charlie sweeping the floor.

If you'd like to share your photo... scan it... and send it in (as an attachment) to my email address in the sidebar.
I'll post it on the blog, for everyone to see.


Peace Brother!
Hope to see more of you, on the blog... Lynyrd