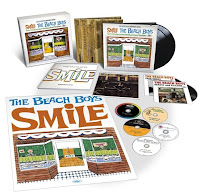 November 1 in the U.S., Capitol will release the Beach Boys' highly anticipated Smile Sessions, collecting tracks from the "lost" album originally recorded in 1966 and 1967. Spinner is streaming the 40-track double CD (or double LP) now.  In addition to the double album, there's also an enormous box set available, containing five CDs, two LPs, two 7"s, a 60-page book, a poster, and "three-dimensional shadowbox lid."
"The fact that it's the sessions that 'Smile' arose out of, you can hear what's behind it," Wilson, 69, said in Beverly Hills home. "Things just squeeze up to where you can hear them, so people can hear how we did it and just how fast we worked. We worked very quickly."  The back story of "Smile," often ranked as rock's greatest "lost" album, has been chronicled many times.
Much More Information Here:
http://www.latimes.com/entertainment/news/la-et-smile-20111101,0,4318504.story
Submitted By Katie!  Thanks Katie!
Posted by LynyrdSkynyrdBand at 1:40 PM
Labels: Beach Boys

You can hear the tracks here:

Here's an interesting interview with Brian:

He says the album wasn't released in 1967 because of:

When we ask Wilson when he realized he had gone too far with the drugs, he says brusquely, "In 1967." Was there a particular moment or incident that brought about the realization? "No, nothing in particular."

Wilson denies the rumors that he had a nervous breakdown after Sgt. Pepper's was released.

Surf's Up is so beautiful, don't you think?

I really like them all! Makes me feel nostalgic. LOL.

I keep thinking while listening to this that they wrote this before they even met Manson.

I still think the Demo version is the best one:

I thought Dennis Wilson met Charlie in 68. Smile was made in 67. It wish I could remember how long Wilson knew Charlie before he got away from him. About a year they were acquainted. Anybody care to narrow that guess down?

Hi Missy! I think my favorite is Heroes and Villains, although I do like Surf's Up too. :)

Hi Mr. P. Charlie met Wilson I believe in the spring of 1968. I think their relationship started falling apart probably in the summer of 1969, a month or so before the murders???

Does anybody else know?