Sometimes...
I think the Girls' Dedication to Manson is WAY Under-Estimated. 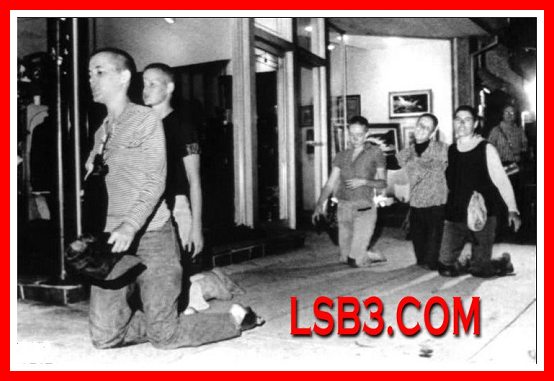 Video Donated by MattProkes!  Thanks Matt! 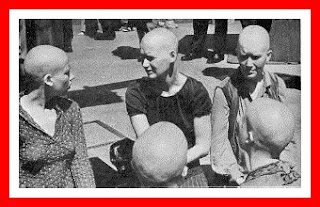 Manson was a grown man… a life-long criminal at that… dealing with young kids… primarily females.  In every arena of life, there’s a “pecking order”… school, sports teams, work, friendship circles, military life, even blogdom.  Manson was at the top of the pyramid, in regards to the “Manson Micro-cosm”.  My African friend always said... “even a bear, knows which tree to wipe it’s ass on”.  For years, I never fully understood his analogy.
One day, he explained:
“A young, soft, weak, supple tree with smooth bark, will bend to the bear’s ass… it’s comfortable.  Whereas, an older mighty oak, with thick bark, will make for rough toilet paper”.
Bottom line: none of these kids were wiping their ass on Manson… he was in-charge.
That fact was observable.  Bugliosi observed this phenomena, and fashioned a sword with it.  He later used that sword to slay Manson.  For that reason, I often have difficulty being overly sympathetic with Manson.  Ultimately, Manson “cooked his own goose”.

You can spin it any way you like... "dedication", "mind-fucking", "love of brother"... it all ends at the same destination.  Charlie had these kids by the short hairs.
I was born at night, but it wasn't last night.  We all know what time it is.
Or, as I like to say:  "You can't make chicken salad, out of chicken shit, no matter how much mayonnaise you use".
Posted by LynyrdSkynyrdBand at 1:15 AM
Labels: Cults, Lynyrd's Opinion, Manson Girls, Motive

A wise man once said:
"A picture's worth a thousand words".

Here is Nancy Pitman, Sandra Good, Catherine Gillies and Kitty Lutesinger outside the courthouse, singing and being interviewed by the media.
http://www.youtube.com/watch?v=zNv7NopYFUg

"Bugliosi observed this phenomena, and fashioned a sword with it. He later used that sword to slay Manson. For that reason, I often have difficulty being overly sympathetic with Manson. Ultimately, Manson “cooked his own goose."

Well said Lynyrd. Like you say, a picture is worth a thousand words. If anyone can look at these pictures and not see Manson's domination over these girls, then they have been blinded to the truth. Unlike people...pictures never lie.

Manson got carried away with himself. I think at some point, he even started believing his own lies. He thought he was Jesus Christ and above the law.

He found out differently, but by then it was too late. He couldn't "undo" what he had done.

V717, thanks for the video footage.

Boy, those girls can't carry a tune in a bucket. They need to keep their day jobs....oh wait...they don't even have jobs. HA HA.

Boy that Nancy Pitman has the deepest, darkest, biggest "X" on her forehead. She must have used one of those buck knives. LOL.

She also needed a little help from Clearasil.

When asked why they're sitting there with their palms up, Sandy says "we've given up". What the hell does that even mean? She was so convinced that Charlie was getting out.

That girl's brain had not just been washed, it was dry cleaned and pressed as well. HA HA HA.

Lynyrd, with reference to your analogy, I think it was Manson who was wiping his ass on them. LOL.

from my dailymotion account,i'm sure most of you have seen this before.
http://www.dailymotion.com/video/xdwjd6_the-manson-girls-crawl

goes with the picture

what the hell...heres my dailymotion manson family playlist
sure most of these have been on bpt channel at one time or another but there might be a few you havent seen before
theres 20 vids give or take...the cielo drive video tour is interesting.its been on yt a few times but always seems to get taken down,its from the period of time that nin was recording there gives you a good view of the house and grounds
http://www.dailymotion.com/playlist/x1e2db_bobstinson_manson-family

i had almost forgotten about this, check out steven kays comments in the first 20 or 30 seconds of the susan atkins gets married video.
talk about crystal balls

atkins and laisure were married in 1981...so much for the steven kay sees the future theory.

Hey Matt thanks for posting those videos.

I had forgotten that Susan married that fake cowboy millionaire. Reminds me of when Leslie married that sucker so he could break her out but he flubbed it. HA HA.

Matt - thanks for sharing...being a newbie on these sites, I haven't seen any of the playlist. Thanks!

Katie 8753
When asked why they're sitting there with their palms up, Sandy says "we've given up". What the hell does that even mean?
That means exactly what she´s saying. This wasn´t hippies even if they looked like hippies. These were slippies. Hippies was just kids with a tourist ticket in the pocket.

I wanted to read you all a few lines from Helter Skelter:

"On June 24, 1970, the TLB trial began. Many spectators had been waiting since 6am hoping to get a glimpse of Manson. They were shocked to see the bloody "X" on his forehead.

His faithful followers interpreted it:

When the jurors saw them Monday morning, the "X"s were the first thing they saw - graphic evidence that when Manson led, the girls followed.

A day or so later, Sandy, Squeaky, Gypsy and most of the Family members did the same thing."

We know this really happened, because we have seen the pictures & videos. The "X"s are there, in plain view. So there is no denying that Charlie was always in charge of these people. A strong enough hold on them that they were willing to mutilate themselves as he did, only to please HIM.

Okay kiddos, put your pencils down and head ups!

This just in....Casey Anthony has lost her appeal and will now serve one year of parole in Orange County, FL, starting Friday. Whether the little princess likes it or not.

Also, tomorrow morning at 9am ET, a hearing will be held to decide if Casey will pay back to the State of Florida the costs incurred to search for a missing child, which was in fact not missing, but dead at her mom's own hands, due to the fact that she can't quite tell the truth...ever.

This doesn't include all the civil suits levied against her.

Ahhhh.....sometimes life does work out. LOL.

I won't report again on Casey's progress until she violates her parole because the truth and Casey are complete strangers, and the heathen bitch will violate her parole and have to go back to the pokey. And the eyes of Florida are upon her. HA HA HA.

I will update you however on the money Casey owes.

She better start stripping for Hustler quick before her value goes down to $10. HA HA HA.

Katie 8753
Manson and his girls despised the hippies because they regarded them as fakes and frauds. They weren´t for real. They were just middle class kids that was out for a little fun. When it was over they all run home and continued there old lifestyle.
The slippies took things more seriously. For them it was more than little fun. They never more wanted to live in the straight world. They had left that world for good. No return. Never look back.

>>>V717 said: They never more wanted to live in the straight world. They had left that world for good. No return. Never look back.>>>

Okay....and how did they earn an income? By stealing credit cards and cars? That means they're living "off the world". They're leeching off mankind. The very world they despise. Isn't that ironic???

Please fill me in on how that's special. I guess I missed that boat.

So slippies think it's okay to deal dope, steal things and ruin people's lives? Then if that doesn't work out, just kill them? How does that make them better than hippies?

Thanks for the video links Matt!

I sent you an e-mail, when you have a chance...

V717 said:
>>>Here is Nancy Pitman, Sandra Good, Catherine Gillies and Kitty Lutesinger outside the courthouse, singing and being interviewed by the media.
http://www.youtube.com/watch?v=zNv7NopYFUg>"<<<<

Thanks for the link V717.
I had seen that footage before, but it's good stuff.
Contrary to Katie, I like the girls voices and singing.
I think they're quite talented.
In fact, I think the girls vocals and harmonies are the best part of the "Family Jams" album.

The interviewer was amazingly kind to the girls, regarding the book they were discusssing...

Kitty is always the quietest of the group... one might even say kinda shy.

If you pause the "crawl video" a couple times... you can really get a good feel for which girls had the nicest ass. LOLOL

OH... cut it out guys... you paused the thing a couple times yourself! LOL

>>>Lynyrd said: If you pause the "crawl video" a couple times... you can really get a good feel for which girls had the nicest ass. LOLOL>>>

HA HA. Well that explains why you think they sing good.

"Honey, do you think I sing good?"

"Oh yeah baby, you sing real good. Now drop down on all fours and do some crawling for me."

"Baby you could beat Beverly Sills with one lung tied behind your back. Now come on....wiggle outta those clothes for me."

I love the way everybody is pointing and laughing at them as they crawl down the street.

I wonder if they show this video to friends and family now. HA HA.

Katie8753
Please fill me in on how that's special. I guess I missed that boat.
Katie, you asked. What are slippies?
I just gave you an answer. That´s all. Sometimes I am a very detached guy, you know.

V717, you made a distinction between hippies and slippies.

You indicated that the Manson Family were slippies, not hippies.

I'm just wondering, in looking at what they did, how that made them "good".

They stole things from people, including family members, they didn't have jobs, they mooched off people, they attended the free clinics, thereby living off the very government they despised. And they killed people.

In fact...they're just like Casey Anthony. Is she a slippy???

So how is it better to be a slippy than a hippy?

Katie 8753
You indicated that hippies were bad, and slippies were good.
No, no, no!
I just pointed out the difference between hippies and slippies. Nothing more. nothing less.

no one could get me to crawl on my knees anywhere, let alone for miles, without brainwashing me.

>>>Beauders said: no one could get me to crawl on my knees anywhere, let alone for miles, without brainwashing me.>>>