A really beautiful photo of Manson and Star.

A friend sent me this photo, so I figured I'd post it for everyone's enjoyment.  Feel free to view and comment, but please do not unnecessarily reproduce this photo, as it's copyrighted material.  Please be respectful.
Copyright - World Order Media. 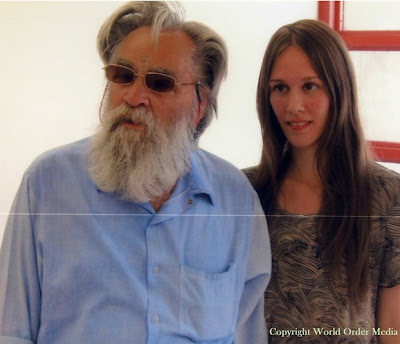 Posted by LynyrdSkynyrdBand at 3:03 AM
Labels: Charles Manson, Star

Oh, and that chick Star looks pretty good too.

Seriously, prison has been GOOD to this man.

I'm not the biggest Manson supporter online... but yes... he does look absolutely incredible in this photo.
He looks healthy and happy.

And of course... Star is a strikingly beautiful young lady.

This is a very nice photo of both of them.

Hi Lynyrd, could you do me a favor and clarify what you mean by if you receive any complaints, you'll remove it. Do you mean if you receive complaints from the owner that the copyright is being ignored and the photo taken, or complaints that you included the link to it on the blog? Just want to understand.
Thanks.

Yes, it´s a very beatiful photo.
It almost looks like a painting.
This photo shows that Manson in the long run has overcome the system. The authories cant get him down on his knees. He´s standing tall and proud and unconquered and together with beautiful Star this photo is a masterpiece.
In comparison take a look at a photo of Vincent Bug and how he looks nowadays. It is not so nice picture.

I did not personally snap this photo.
The photo was taken (and is owned) by "world order media".
A mutual friend (of world order, and mine) sent me a copy for my enjoyment... and told me I could share with my friends here.
I'm asking folks to be respectful.
Nothing more, nothing less.
If you shit on people, they won't share in the future.
If we simply view the photo, and leave a few comments, there's no problem.
If the photo ends-up all over the web, with Hitler's mustache painted onto Manson... with other people's watermark on it... etc... I'll take it down... and, I won't share in the future.
I don't want to insult any friends... and, I don't need any headaches.

I'm not a lawyer... so that's the best explanation I can give, without legal consultation. LOLOL

No, no Lynyrd, you don't need to reword anything, it's fine the way it is. I appreciate your explanation, and get what you meant now.

He does look pretty fit for a guy that's been in prison for most of his life.

I wonder if he can still jump from the defendant's table to the judge's bench in one leap. LOL.

Ahahahaha
Katie... you're hilarious! LMAO
"In a single bound"! LOL

All kidding aside... V717 is right.
Manson DOES look much better than Bugliosi.
Bugliosi looks like a parody of "Fire Marshall Bill"! hahaha
"LEMME TELL YA SOMETHIN". : )

It's amazing...
One guy spends his whole life free, with (I'm assuming) loads of money, and the other is in jail his whole life... even burn't-up once... and the second guy looks BETTER!
Go figure huh?

Maybe life itself is a "reflection" of some sort! LOL

I get a mental picture of that jump. Just like a frog. One fluid motion. Boooiiiinnnngggg.

I hope Mr. Zamora put that in his book. Gotta love it!

I love those eyeglass holders around his neck like a librarian. Now I know exactly why he wears them. So you can always find them! HAHA.

Think back to 1969 what he looked like then, "the most dangerous man alive" and then flash to "now".

Charlie always said prison was his home...you can tell he was comfortable and not stressed...Bug on the other hand has to put up with all the crap the rest of us do...we have to earn money to pay our rent, our bills, our groceries, our entertainment....Charlie has all of that paid for him...what does he have to be stressed about?

>>>Mary said: Charlie always said prison was his home...you can tell he was comfortable and not stressed...Bug on the other hand has to put up with all the crap the rest of us do...we have to earn money to pay our rent, our bills, our groceries, our entertainment....Charlie has all of that paid for him...what does he have to be stressed about?>>>

That's very true Mary. Didn't think about that. What has he got to be stressed about? He doesn't have to worry about the electric bill or the water bill or the grocery bill or the mortgage payment. The state of CA is footing the bill for him.

He doesn't even have to worry about being lonely. There's always some groupie ready, willing and able.

Do you two ever dis-agree on anything? LOL
It's like two peas in a pod.

in this picture he does look alot better than the last picture that was published and on the cover of Manson NOW...

LOL - you are right...Katie and I don't disagree on much...she is a smart lady!

Charlie has dyed his hair.

he has died his hair white?

You guys are cracking me up.

So what if he looks good? I'm sorry, my friends, but all I see is a self-absorbed, egomaniacal, little antisocial convict who has the blood of so many innocent people on his hands!! He should have been put to death a long time ago, but there he stands, happy and healthy, a dirty old man toying with the life of another impressionable girl who is young enough to be his granddaughter!!

And, although I so appreciate the post of that pic, Lynyrd, I must admit, I can't help but think of those lovely people and the horribly brutal way they died just because Charlie deemed it "necessary".

What's more... we will NEVER know what Sharon or baby Paul, Abigail, Rosemary, Steven, Jay, Voytek, Leno, Gary, Shorty and, possibly, so many others, grew to look like. Unfortunately, the last pictures we have of them are from the crime scene slaughters and the morgue.....

There...I've said my peace and thanks again, Lynyrd, for the kind of forum where I can do that without repercussion!

Hi LadyRam. Your opinion is always appreciated here. I agree totally with you.

I got to thinking early this morning that Charlie has never really supported himself as a law abiding citizen. Other than a few odd jobs, he has lived his entire life off either the prison system or law abiding citizens, stealing credit cards, cars, pimping, hustling, conning and ruining the lives of countless young people who did his bidding.

He's never paid a dime of child support for any of his spawn. He is the epitome of "the deadbeat Dad".

And you're right, who knows what his victims would look like today...they didn't get the chance.

I don't know anything about this young girl he's with currently, and can't imagine why she would be hanging around with him, but can only assume she's just another one of his "victims", being sucked in by his "rap".

I guess she too one day will realize her folly and will wish she'd never met him, just like so many others that fell under his spell 40+ years ago, and hopefully, her life won't be ruined by her association with him.

Amen, LadyRam...you too, Katie...at the risk of agreeing with you again :) Lynyrd should just get on board with us, right?

If there is anyone who want´s a deeper understanding of who Charles Manson is and the roll he plays in todays society I suggest that you go to google and type: "The American meaning of Charles Manson."
It´s a long academic treatise written over ten years ago and can be a little bit difficult to read but it is well worth the trouble.

Hey LadyRam!
Great to see ya!
I was just thinking:
"I wonder where LadyRam disappeared to"...

We'll be discussing pages 66-90 or so, with the book club (fairly soon), if you wanna participate.
I say "fairly soon" 'cuz I'm a procrastinator... and, I never can tell for sure exactly when things will happen... but, it'll happen. LOL

Man... I don't even have an opinion anymore. LOLOL

As Charlie said it best:
"Man... I'm whatever you want me to be". hahaha

>>>V717 said: If there is anyone who want´s a deeper understanding of who Charles Manson is and the roll he plays in todays society I suggest that you go to google and type: "The American meaning of Charles Manson.">>>

Thanks V. That was an interesting article. I don't agree with it....but it was still interesting. :)

"Man... I don't even have an opinion anymore. LOLOL"

Of course you have an opinion...I just thought you might want to be RIGHT sometimes!

I am totally just teasing you!

I'm guessing the beautiful girl with Charlie hasn't experienced any strip and suck demands from him, or felt his fist smash across her face and been abused, degraded and 'fucked to death' either.

>>Marliese said: I'm guessing the beautiful girl with Charlie hasn't experienced any strip and suck demands from him, or felt his fist smash across her face and been abused, degraded and 'fucked to death' either.>>>

No she probably hasn't been ordered up on the bar to spread her legs, or had knives thrown at her or been queried the ever popular "will you die for me" crap.

VANCOUVER ONLY SCORED ONE GOAL IN BOSTON... OVER TWO GAMES!!

knocked the smugness right out of 'em!
loved thomas at the end havent seen those kind of balls since the billy smith/ron hextall days.
if we take game 5 the canucks are in serious trouble.
did'nt think i could hate a team as much as the canadiens but now i do.

why do cult leaders almost always have a good, thick head of hair? lol! (wait...is the Hare Krishna movement a cult?)

and holy helter skelter, that really DOES look like a young Sadie!

When Thomas cracked Burrows across the back of the thigh... that was awesome!!!

Does Star realize that if she had been at Cielo in Aug 69 Charlie would have had her hacked to pieces too. I would guess that Star has identity issues. Perhaps being fotod with Manson gives her life meaning? Pitiful. Star has a hole in her soul.

>>Mr. P said: Does Star realize that if she had been at Cielo in Aug 69 Charlie would have had her hacked to pieces too. I would guess that Star has identity issues. Perhaps being fotod with Manson gives her life meaning? Pitiful. Star has a hole in her soul.>>>

For some reason, these groupies just believe everything he says. Amazing!!

Folks have the right to hang out with whoever they wish and shouldnt have to be psychoanalysed magically via a picture.

He probably doesn't get outdoors much, so his skin's been protected from all those damaging sun-rays!

Oh that's sweet. I wish I could put on my Tumblr page, but I'll be respectful and just like it here. :)