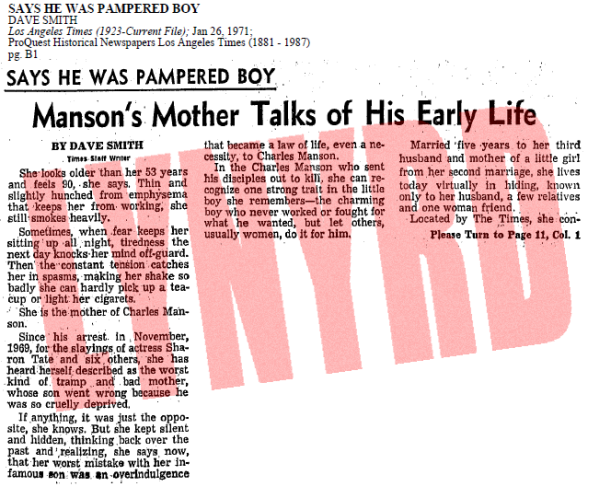 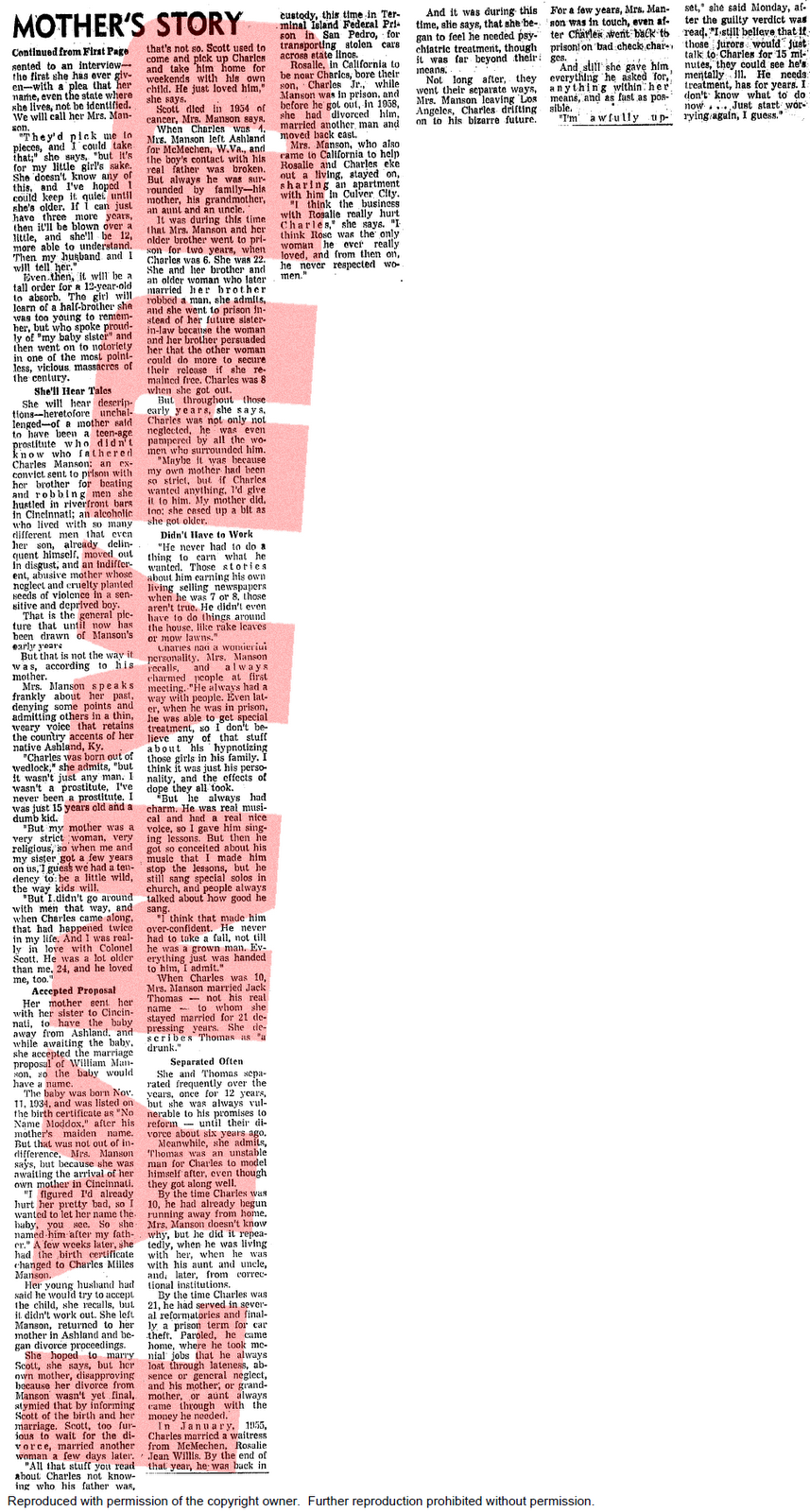 Posted by LynyrdSkynyrdBand at 1:53 AM
Labels: Kathleen Maddox

This writer really gives you a vivid description, of Kathleen's condition.
She was a huge drinker and smoker, and physically (and likely mentally) a mess.

I think the best part of Kathleen's input was the following:
She said>>>>
"I think the business with Rosalie really hurt Charles. I think Rose was the only woman he ever really loved, and from then on, he never respected women. And it was during this time, she says, that she began to feel he needed psychiatric treatment, though it was far beyond their means".

This last part was kinda sad:
She said>>>>
"I don't know what to do now... just start worrying again, I guess".

When considering the way she lived her life, and the way Charlie turned out- I am reminded of something my father once told me while watching a retarded puppy chasing his mothers tail- while she chased his...

" when you plant corn- you get corn"

LOL St. - never heard that before...but I will be using it. Thanks.

"When fear keeps her sitting up all night...."

What was she afraid of??? The trembling hands sound more like delirium tremens.

I have to say, she definitely seems extremely mentally unbalanced.

"when you plant corn- you get corn"

"You reap, what you sow? LOLOL

"The apple doesn't fall far from the tree"? LOLOL

Charles actually remembers his mom fondly, says things like "She was a good ol' gal".

However, IMHO, she was neglectful and irresponsible. I see a lot of her tooting her own horn, here in this interview. In my experience, bad parents often justify themselves. Good parents are often ridden with self-doubt.

Yes, she was doing an awful lot of justifying and never really admitting to any mistakes - other than over pampering. Which makes me believe she is not being as truthful as she could be.

This article also leads me to believe that she was not at the trial - and definitely not the lady on the video in another post...that lady looked too put together and not as the writer describes in this article.

I don't think she would have risked being found out and mobbed by reporters at the trial. She made a huge point of not giving any information in order to identify her.

Thanks AC.
That's nice to hear.

AC said>>>>
"However, IMHO, she was neglectful and irresponsible. I see a lot of her tooting her own horn, here in this interview. In my experience, bad parents often justify themselves. Good parents are often ridden with self-doubt".<<<<

I agree.
It seems she intentionally left out, the "reality" portion of the story.
This is a bit too "candy-coated" for common sense purposes.

AC I have to agree with you. She doesn't come across as a very honest person. Too many holes in her story. She did seem to only defend herself, occasionally mentioning that Charlie needed "medical help". If she wanted to be so anonymous, why volunteer for an interview?

Although I don't think it's fair to blame her for all of Charlie's misdeeds.

Mary I'm inclined to agree with you that she wasn't at the trial. She doesn't mention going to the trial in this interview, and as you pointed out, the lady in the video seemed pretty put together and collected. Then suddenly she's a blithering mess right after the trial?

Mary said>>>>
"This article also leads me to believe that she was not at the trial - and definitely not the lady on the video in another post...that lady looked too put together and not as the writer describes in this article".<<<<

It doesn't appear from the article, she wanted any notoriey at all.
The article "suggests" this was her first interaction with the press.

If she did go to the trial... and that's a big "if", she obviously came and went, without being noticed... 'cuz, it's sure hard to find evidence she was there.
You'd think if she was there... evidence would be easy to find.

And I agree... the woman on the video, doesn't seem to fit the "broken down" description, of this reporter.
Unless, he's over-exaggerating dramatically, to sell a few extra newspapers.
Wouldn't be the first time I guess.
Although...
Judging from the fact that she died shortly after the interview... one would assume the description is every bit accurate.

Katie said>>>>
"She doesn't mention going to the trial in this interview".<<<<

Good point!
It doesn't seem likely, she would have missed the opportunity, to let everyone know, she was at the trial (supporting her son).

For a woman, who's obviously making every effort to cover her tracks... indicating she was at the trial, would have been a good selling point, that I doubt she would have passed-up.

It's funny how she keeps saying Charlie needs professional help, but never bothered to get him any that I can see.

The gist is...they couldn't afford it.

Well....wasn't she driving a Cadillac back in 1967? She could afford that. And that's before she got married again! I guess it depends on what's important in life.

You said the footage of her being interviewed (probably this interview), was part of Bret's collection.

To my knowledge... even though Bret's site is gone... his video collection is still intact on YouTube.
At least the last time I checked it was...

I'll have to check that out.

Yes Lynyrd I believe it was one of Bret's videos, but i just can't find it. I've used every search word I can think of. I hope you do find it.

I wonder if she got paid for these interviews? Does sound like she is trying to justify her behavior- asi mentioned people try to rewrite the past. Couldn;'t have been all great if he lived in a boys home. I wonder how Charlie's half sister turned out?

Where are my manners? Thanks, Mary- great article!

Lynn I doubt if she got paid...but I don't really know. I'd like to know more about Charlie's sister too. Don't hear a thing about her.

And the wind whispers....

All kidding aside:
This is a very tragic story, from beginning to end.

In her defense... it was a totally different world for mental health patients in the 50's.
There was a HUGE stygma involved with admitting you were "crazy".
The treatment at "asylums" was marginal... and more accurately described, as very questionable.
People feared those places... and in many regards, rightfully so.

We now have many medications, that didn't exist back then... and seeking help is culturally accepted.
Admitting you were "insane" back then, was worse than coming out of the closet, as a homo-sexual.
You'd probably be better accepted as an alcoholic, with a prison record.
Now... I'd be much more critical of someone avoiding treatment.
Back then... it was a different world.
Heck... even being in a wheel chair 50 years ago, was cause for staring.

At any rate... what I'm trying to say, is that I feel bad for the woman (Kathleen).
Mental illness is no joke.
It's not to be laughed at.
Look at all our veterans who came home, with substance abuse problems, due to mental problems.
Many of them became homeless.
These are our heroes.

This whole case is tragic actually.
There are no winners here.

Seeing a woman drink herself to death by 55 years old.
Seeing folks being senselessly murdered.
Seeing others rotting in jail for a lifetime.
I take no pleasure in seeing a completely wasted life.
No winners here at all.

You know you're right Lynyrd.

Back then it was a complete family embarrassment to admit you had mental problems. And the treatments were barbaric.

If they couldn't figure out what was wrong with you, they did shock treatments, and if that didn't work, lobotomy and lock up forever.

not many winners in the Manson family tree- either biological- or otherwise..

This lady lived a hard life during very hard times...

Sad no doubt- and maybe she didn't have great control of her faculties- so we shouldn't blame her for having children in such a bad situation...

But just like her son- this lady did some awfully wrong things- and I personally can only accept so many excuses for them..

Although- if she had undiagnosed serious mental illness...

then maybe that changes things...

but I dont know?

Point Taken Mary.
There are folks, who are "their own worst enemy".

I have no idea if Kathleen had legitimate issues she was incapable of over-coming, or if she was just a straight-out bum.
Without having known her personally... you're right, I'll never know for sure.
I like to give people the "benefit of the doubt"... but, you're right... I can only speculate.

I once dated a woman who had a substance abuse problem.
Try as I might to help her, all my efforts went for ZERO.
You just couldn't help this idiot.
If you were digging a hole... she'd be at the top, shoveling the dirt back onto you!

I asked my Dad (during that time), why some folks can over-come great adversity, and come out the other end fine... even prosper.
And why... other bums, you can't help them even if you want to.

I'm so sorry to hear of your loss.

I'm not sure what else to say... I'm really so bad with these things.

BTW Lynn...
You're not de-railing anything.
We're all friends here, and you can post whatever you want.

Lynn I'm so sorry for your loss. the first night is the hardest.

Hang in there. It will get better.

I've lost pets and I've thought I'd never get over it, but you do.

My thoughts are with you...

Charlie says he never killed anyone and the killings were not his fault. His mother says she didn't neglect Charlie. Yep, it fits.

Poirot said>>>>
"Charlie says he never killed anyone and the killings were not his fault. His mother says she didn't neglect Charlie. Yep, it fits".

And the circle won't be broken...

Lynn..you are in my thoughts and prayers. I, too, have lost feline and canine members of my family and is so very hard. I pray that you celebrate the years of your sweet Erin's life with you,and try not to focus on the day she had to leave. God Bless....

Also,Lynn, thanks for the very interesting article. Lynyrd, Katie is right, that video where Kathleen is being interviewed was on Bret's site. I know I saw it there, but try as I might, I cannot pull it up. Guess we will all keep tryin' and maybe one of us will hit the jackpot! Peace out..........