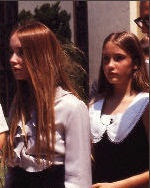 Posted by LynyrdSkynyrdBand at 1:31 AM
Labels: Debra Tate, Patti Tate

This photo had a caption, stating that it was taken at Sharon's funeral.

It does indeed look like a funeral photo...
But to me, Debra looks a bit young.

Debra looks a bit young for 17 there to me... but, then again, I'm just old, so everyone looks young. LOL

Lynyrd I often wondered and asked the question: why did Doris & Paul wait 10 years to have more children after Sharon. No one has ever responded. I guess no one knows.

I don't know if it was a medical issue, or a personal decision.

Maybe Doris was so enamored by Sharon that she didn't want to spend time on another baby at that time.

Sharon was 26 when she died and Debra was 16, ten years younger.

Yeah, I was just reading the news about Elizabeth Taylor on my "homepage".

Debra Tate always takes a LOT of flack on these blogs.

Granted... she does say and do, a LOT of really bizarre things.
Especially, when she says the sex between Roman and Samantha was "consentual".

I cut her slack, because she's obviously mentally ill, and has serious emotional issues.
You can see in her face, she's just "not right".

I pity the woman more than anything.

Afterall... her mental and emotional illness stems from the fact that her sister was brutally murdered when she was 16.
She didn't ask for that cross.

At the end of the day... folks have to remember, Debra is actually the victim here.
She's mentally ill, nuts, bonkers... whatever you want to call it, by events that were thrust on her... beyond her control.

I don't think she's half as strong as Doris and Patti were.
I think staying in the background, was good for her.

She was thrust into a role, she's completely ill-equipped to handle, both mentally and emotionally.
Again... a cross she didn't ask for.

Debra was severely damaged by the murders, at a very inpressionable age... and now, is trying to fill a role, she's been left ill-equipped to handle.
That's my take on Debra in-a-nutshell.

As annoying and bizarre as Debra is... we have to remember, this is not the life she would have chosen for herself, or Sharon, I'm sure.
I'm sure these parole hearings, are something she dreads quite frankly.
As I said... I pity the woman more than anything.

Lynyrd you're right, she does dread the parole hearings. Like you said previously, if these people were truly sorry, they'd stop asking to get out and putting the family through all this every 2 years or so.

I do feel sorry for Debra as well, not only was her older sister, whom she idolized, brutally murdered, but all of her family is gone. I'm sure she feels alone.

No rush brother... no rush at all.

It's too bad you can't read it online.

My area is expecting 2-4 inches of snow tonight, as well. UGGH!!!

I hope it warms-up just-enough, and turns to rain!

If I have to take that damn snowblower out again... we're gonna have another murder to study! LOLOL
(just kidding)

It's offically spring for cry'in out loud.

Audio book...
I didn't even think of that.

Maybe I'll do that the next time around. LOL

Well guys this is when it's nice to live in South Texas. We're having 80 degree weather.

However...come this summer and it's 100 degrees in the shade, I'll be wishing I was up north. HA HA.

Bobby did you check with your local library? That's where I found Sharon Tate and the Manson Murders.

Maybe I'll do that the next time around. LOL>>>

Just make sure you don't get too engrossed and run a light or something. HA HA.

Bob, have you checked-out Bethel Woods... the Woodstock Museum?
I've always wanted to check that out.

I drove through upstate NY when I went to Niagara Falls... ya know, Buffalo.

Anyway... I drove through Utica on my trip to Niagara.
Is the brewery still in operation?
Didn't they become "Matt's Brewery" at some point?

Remember the "Matt's Beer Ball"?
It was basically 3-4 cases of beer, inside a see-thru plastic ball... complete with cheap tap included.

Katie said>>>>
"Just make sure you don't get too engrossed and run a light or something. HA HA"

See... I knew what you were thinking! LOLOL

>>>Bobby said: Thanks Katie, I will check out the local library, Every time ive been Texas ( Dallas/Fortworth) the weather was crazy flying out. Either bad thunderstorms or ice storms. Otherwise i very much enjoyed my visits.>>>

Bobby the weather in Dallas is CRAZY. We don't get that here. We don't usually get sleet or tornadoes, or in particular, earthquakes here.

We do sometimes get some bad weather off hurricanes, but it's usually not too bad.

See... I knew what you were thinking! LOLOL>>

HA HA. Yeah, if you start listening to one of the "Charlie orchestrated love-ins" you might blow a fuse.

Square off and do si do. LOL.