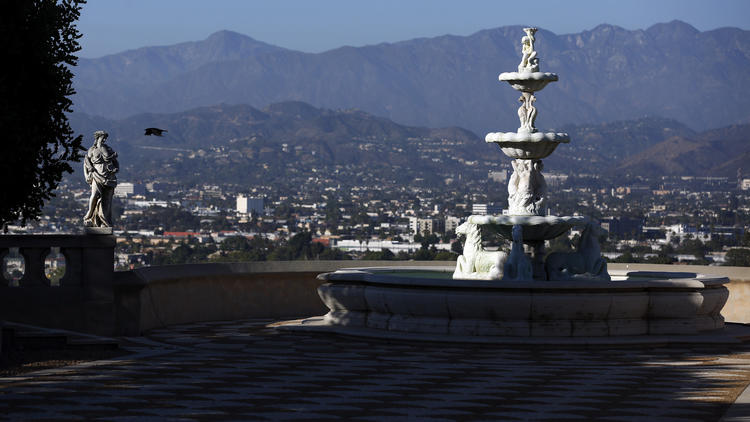 I'm very sorry to have been gone so long.  I am mad busy with three gigs now so I shall probably remain scarce for a while...


Back in January I finally was able to make the trip and spent four days and nights in LA.  I saw some friends, dined in Hollywood at Osteria Mozza after having had drinks at Musso and Frank with an Industry friend of mine, saw Chris Carter of The X Files and met an actress who gets killed on it's latest incarnation.  I planned on taking the Manson Tour but it wasn't available, so I had to see what I could on my own.


I drove up and down Cielo Drive and took pictures from Falcon's Lair, drove up and down Mulholland Drive, went to Brentwood and accidentally found myself on Bundy, but also went to Los Feliz to see the LaBianca's  house on Waverly.


I noticed that the property right next to it on the left as you look at it was a Convent.  I studied it because it went a long way towards my understanding that the LaBianca's house could indeed be considered somewhat isolated because the Convent's grounds are vast and there's no house on that side anywhere near where the LaBianca's house is.  I thought I would eventually research the Convent, see how long it has existed and all, but didn't get around to it.


Then I saw this Katy Perry thing on the TV news and it seemed so familiar as they described this property, and yes indeed it is one and the same.

Interesting stuff! Thanks for sharing!

Osteria Mozzarella, nice.... I tell lots of people to put either the Osteria or pizzeria on their list to eat, always worth the wait, even at midnight.

Thanks Starship! I didn't know there was a convent by the La Bianca's house. Didn't Leslie want to be a nun before she became a hippy killer? She missed her chance by THAT MUCH!

I'm actually surprised we never did a post on that property...it originally belonged to Earl C. Anthony....

I researched it a long time ago as a friend of mine rented 3301 Waverly in the 1980s and said that property next door was creepy...

Great to see you, Kimchi!

Thanks Kimchi, I was vaguely aware of Earle Anthony but not the depths of his involvement into the development of Los Angeles. I still listen to KFI every chance I get since the signal usually reaches up here in the early hours of the day.

Wow I've never heard anybody mention that convent next to the LaBianca's house. Nobody. Not people that have been there a million times to film the house, not the killers, not the family...nobody.

And I wonder how the Manson family felt killing folks next to a convent. You'd think that was sacred.

Well nothing was sacred to them.

Well, Katie, according to wikipedia, the property wasn't donated to the nuns until 1971. It was a private home until then.

Indiana is voting this evening.
Polls close at 7pm EST.

If Trump wins Indiana tonight, Cruz and Kasich (if they have ANY class at all) should fold-up their tents, and go home.

It's time for the Republican party to unite... and focus their (concerted) efforts on defeating Hillary.

By staying in the race, Cruz and Kasich are just fucking things up, AND assisting Clinton.

To Cruz and Kasich:
You lost.
Get over it.
If you're THAT "butthurt" about losing (that you'd rather see Hillary win the whole thing), then you're just fucking babies.

It's still pretty close between Clinton and Sanders although she's a bit ahead.

Allow me, to do the math for Cruz and Kasich.

Only 1,237 delegate votes are needed, to win the Republican nomination.

As Venus indicated, only 45 (of Indiana's 57 delegate votes) have been awarded so far...

Hillary Clinton first said she was gonna get rid of coal mines, then she back-tracked and said she was gonna save them, and have her hubby Bill work in them. I guess it's better for him to do that instead of being the "first lady" and hosting teaparties. HA HA HA.

Wow how emasculating is that for a man that used to be President and have his wife as President. Sounds like she would turn him into a Eunuch. That payback is a bitch-let!

Maybe she can have affairs in the oval office like he did. If she can find somebody who wants to have sex with an old prune like her.

There is a news story about the recent parole hearing for Leslie Van Houten when she was approved by the parole board for release. The article includes a transcript of what I assume is the entire parole hearing, it can be seen -->HERE.

I always liked Katy Perry, I remember when they wouldn't let her clip be shown on Sesame Street because her dress was apparently too revealing. I was going to post a link to that, but while looking for it, I ran across the parody SNL did of the incident. I don't watch SNL much anymore, but I remember seeing that one. It's on Dailymotion-->HERE.

Finally, I have a relative that's lived in D.C. for many years, his mom worked at the Pentagon for many years. The White House issues a commemorative Christmas ornament each year and they've brought us each one for about the last 25 or 30 years. He was up here last week and had what he said was the latest issue of the ornament, it was in an official looking box, when I opened it there was a metal ornament with a smiling picture of Donald Trump.

My Presidential Election predictions, and why...

I really think, Trump's gonna win it all.

The liberal media, has been pummeling Trump from day one.

It's all so ridiculous.
The truth is, he's an American businessman.
That's all he's ever been.

Yes, he's a bit crude, blunt and spoiled (that kinda comes with having 4 billion dollars)... but he's a businessman.

The media has been telling the general public from day one, that Trump can't win.

BUT THEN...
When election day comes, Trump wins by a landslide.

Does that NOT tell people, that the media LIES to you???

If you're one of these naive souls, who actually believes everything the media tells you... then, you'd better start wrapping your head around the fact, that Donald Trump has an excellent chance of becoming your next President... (because that's what the media ISN'T telling you).

It's probably gonna happen folks... so, start coming to grips with it.

And, you know WHY it's probably gonna happen?

Because people are sick of "the Establishment"... and that's what Hillary represents.

People want something new, they want change, and they're willing to roll their dice, on a man who doesn't represent "the establishment".

It's really that simple.

Trump is the "non-establishment wild card".
Trump offers an alternative to the status quo.
People are responding to that.

Trump really doesn't have to be anything at all, except NOT Hillary, and NOT the "same old, same old". (to get votes).
That's a pretty easy task.

Trump may be great as a President... OR, he may suck... (it's really hard to say)... but, people are willing to roll those dice... because with Clinton, they KNOW they're going to get more of "the same old, same old"... and most people don't want that.

In a word:
You have a professional "old school" politician vs a "wild card".

However, "Politician VS Anti-Establishment Wild Card"... and Hillary could lose.

The BEST thing that could have happened to Hillary, is if an old Fogy Republican politician like Cruz or Kasich had won the Republican nomination.
Unfortunately for her, that's not gonna happen.

That's just my two cents, and I'm a guy who usually doesn't follow politics AT ALL.

If you disagree with me, that's cool... but, that's my prediction based on what I'm seeing.

Hello Sunset.
Good to see you.

Sunset said:
"Finally, I have a relative that's lived in D.C. for many years, his mom worked at the Pentagon for many years. The White House issues a commemorative Christmas ornament each year and they've brought us each one for about the last 25 or 30 years. He was up here last week and had what he said was the latest issue of the ornament, it was in an official looking box, when I opened it there was a metal ornament with a smiling picture of Donald Trump."

It's official, Ted Cruz is Done.

"From the beginning, I've said that I would continue on as long as there was a viable path to victory," Cruz told supporters at an election night rally in Indianapolis. "Tonight, I'm sorry to say it appears that path has been foreclosed."

A surprised crowd gasped and booed as Cruz made the announcement.

"Together we left it all on the field in Indiana," Cruz said. "We gave it everything we got. But the voters chose another path."

John Kasich seems like a nice guy. He does.

But, if he stays in "the race" now, he really needs a psych evaluation.

Evidently, Kasich is not dropping out.
The guy needs his head examined... for real.

That guy won one state. He's delusional. He must be Hillary's new whipping boy.

I admire tenacity, but he's just nuts (at this point).

I just heard on HLN that Kasich is quitting.

Honestly, he should have dropped-out before Rubio.