It seems Charles Manson's birthday came and went, with little mention on the blogs.

And how appropriate really?

Yesterday, I saw a Facebook post about a WWII veteran.
The man was 108 years old.
The gentleman, is our country's oldest living veteran.

He still looks strong... and evidently, he's still very active in his community.
He even organizes his local parade.

At that moment, I thought to myself:
Now... here's a guy, who deserves notoriety and press coverage.

Yes...
Charles Manson's birthday came and went, like a fart in the breeze... and how appropriate.

I sometimes feel guilty, about the notoriety these blogs bring to Charles Manson.
(My own blog included, of course)

Chapman said something to the effect of (and, I'm very loosely paraphrasing here):
"I was a nobody. I figured... if I killed someone important, I'd be a 'somebody'. People would remember me."

In the aftermath...
I remember Paul McCartney encouraged the entire world, to give Mark David Chapman, no more press, attention, or notoriety than absolutely necessary.

I sometimes feel the same way, about Charles Manson.

Manson has already lived longer than he deserves.
From his birth, Manson has contributed zero to the world... and he's been a constant drain on society.

Maybe letting a criminal "rot in obscurity", is the best punishment of all.

The oldest WWII veteran is an American centenarian from Austin Texas. He served in the South Pacific from 1942 through 1945, including stops in Hawaii, Guam, Palau and Iwo Jima. He left the U.S. Army in October 1945.

Yesterday, Overton served as the Grand Marshal in Austin's Veteran Day Parade. Living in the same home he purchased for $4000 after returning from the war, Richard Overton is still very active.

Overton used to start his days with some whiskey in his coffee, and he still adds a teaspoon from time-to-time. “It’s just like medicine,” he said. Overton also smokes cigars daily, too. Keep in Mind he is 108 years old!!!! 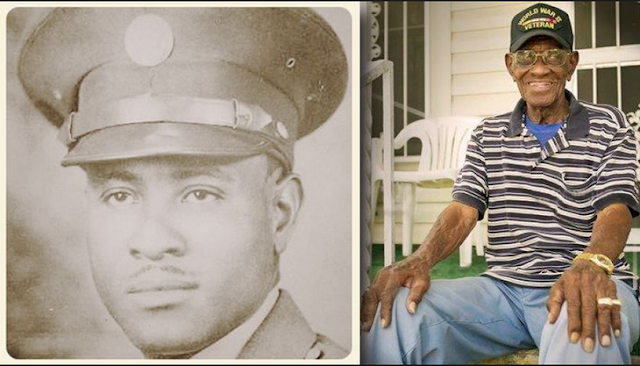 Posted by LynyrdSkynyrdBand at 11:00 PM

Maybe it's time for our nation, to re-examine who our heroes are...

Well there you go..

Whiskey and cigars are good for you. HA HA.

A salute to Richard Arvine Overton.

A while back a former MMA fighter named Johnathon Koppenhaver apparently beat his former girlfriend Christine Mackinday nearly killing her. I think there was some type of initial hearing in the trial.

Part of that hearing including part of the 911 call can be seen here-->Christy Mack.

Well, this is just more opinion that there is a good kind of killer and a bad kind of killer. The person getting killed probably thinks they are getting murdered. As will their family and friends.

Whichever authority figure you obey and whatever creed you seek to advance, if somebody tells you its alright to randomly kill a fellow human being........you go tell them to go fuck themself.

And the world would be a less dangerous place.

How dare you TomG. Fuck off

Apparently Charlie's hospital visit was a ruse as what he really did was marry Star.

I was just watching the news out of Baltimore, they said a marriage license was issued on Nov. 7 for Charles Manson and Afton Elaine Burton. It said the license was good for 90 days for them to get married.

A news story about it can be read--->HERE.

The story says the marriage may have happened sooner, but Manson was in trouble for various incidents in prison including failing to give a urine sample. When I was in super max, I refused to give a urine sample also. A cop came down to my cell and said "you can't refuse". He took his little wooden box and went away, I never seen him again.

Sunset I was off topic before you were off topic