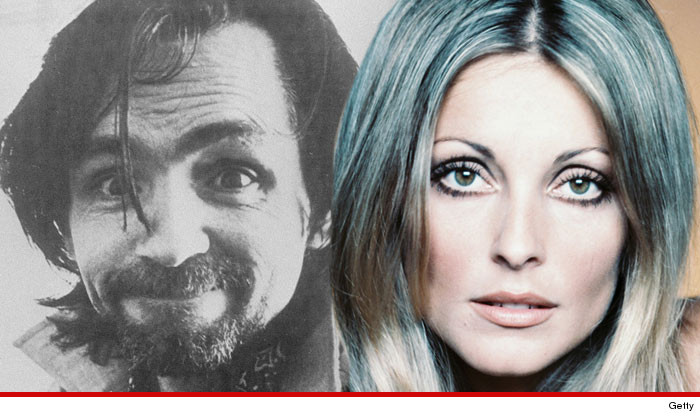 Debra Tate calls it the lowest of lows ... vowing to sic her lawyers on producers if they dare use Sharon's name or likeness.

Problem is, it's parody so she's flat out of luck.

Why is Debra flat out of luck?

I know that certain people harp on the fact that Debra doesn't own the rights to Sharon's images, etc., but who gives a shit?

And I'd win. I don't have to own her image rights. I'm her next of kin.

Katie, who owns the right to Sharon's images?

Some of this comment is quite lurid, so be warned.

In the 1970's there was a TV show called "The Gong Show" starring Chuck Barris. There was also a very famous poster of Farrah Fawcett that was everywhere.

One of the films I ran at the drive in, in 1979 was "Candy Goes to Hollywood". In that film there was a "parody" TV show called the "The Dong Show". Richard Pacheco played the role of "Chuck Bareass", other characters had the names, "J.P. Organ", "Johnny Farson" and "Ed the Mann".

In one scene of the TV show parody, an actress shot ping pong balls from her vagina that some guy caught in his mouth. Rhonda Jo Petty was made up to look nearly identical to Farrah Fawcett, for the role of "Sarah Daweett", but I don't remember if it was her in that scene or not.

That film was displayed on the GIGANTIC outdoor screen in brilliant color. My grandmother also worked in the snack bar of that drive in, she taught Sunday school classes for 32 straight years without missing a Sunday. She wasn't particularly impressed with that cinematic masterpiece.

Carol, I don't know who owns the rights to anything of Sharon's. I would think it would be the only living sibling, but I don't know for sure.

I agree, they can put all those Manson folks in a mosh pit and have a sea of naked bodies humping & grinding with green spit coming out of their mouths, but leave the victims out of it please.

Hey Sunset77, I know you have a Sacramento connection. Was it The Westlane in Davis, CA?

It must have been a pretty awesome job, to be a drive-in projectionist "back in the day".
Drive-ins were REALLY popular in my area, during the 70's and 80's.
It was the rage!

All the hilarious "parody jokes" aside... I agree with your assessment.

The people who make these types of movies, are out to make money... and they know how to "walk the line" legally, and stay out of trouble.
And yes, they've been doing it for years.

Unless Debra is willing to throw mad money at this situation... I highly doubt, that she will dissuade them.

The bottom line:
If Debra was willing (and able) to spend loads of money on legalities, and inconvenience this producer with never-ending court dates (for a very long time), this producer just might back down (out of sheer inconvenience).
But let's be honest... that's not gonna happen.

Having said all that...

Am I missing something??

There's tons of FREE pornography online these days.
It's everywhere!
You can even download it.

It begs the question:
Who is still paying to watch smut in 2014??

To take it a step further:
I don't even understand, how the "professional actresses" can still make a buck.

Just my two cents on the subject... for what it's worth.

(The second half of my commentary, was not directed at Sunset specifically. I was just thinking aloud. Feel free to weigh-in folks!)

Ah, the drive-in. I was telling my kids tonight that when I was a teenager me and a couple of friends went to the drive-in to see Midnight Cowboy. It was showing there because it was rated "X".

I told them it was rated "X" because of the scene in the movies with Jon Voight and that young kid. They just laughed. LOL.

Katie, that young kid was played by Bob Balaban, aka Russell Dalrymple.....

Doc, I didn't know that! No wonder he was offended by a peek at cleavage. LOL.

I think Congress should pass a law making it legal for American citizens to earn money from sources other than unemployment benefits.

Mr P, would we all still be eligible for free cell phones under your proposed bill?

Where the hell has Leary been? LOL!

But on a serious note, has anyone heard from Leary?
I haven't seen or heard anything from him, in months.

He's got so many serious health problems, I hope our friend hasn't slipped off this mortal coil.
And how would we know???

Leary... you out there Bro?

I'm sure you're all aware of the fact that Sharon had a nose job. Right?

Katie, a nose job? I never heard that.

@Doc Sierra, I have no "Sacramento connection", I've never been anywhere near CA, but if I did, it would probably be a secret.

I looked up the IMDB page of "Will Ryder" (which is probably a play on the words "will ride her), his given name is apparently Jeffrey Mullen, the "producer/director" mentioned in this post as being involved in this Manson parody.

Paying the actors, building the sets, videoing, and marketing the "product" all cost money, (probably legal fees as well). These vids are probably made on a tiny budget compared to "regular" movies, however, I would guess they have to make at least enough money to cover production costs, or they couldn't stay in business.

Some "talent", "skill" and effort are apparent in these videos, they almost certainly don't suit everyone, but there must be a market.

These films are nearly impossible to find online for free, they must protect their copyright viciously to make money. Kind of ironic considering the copyrights they could be construed as infringing.

Carol I don't know for a fact that Sharon had a nose job, but if you compare pictures of her in high school or right out of high school to the picture Debra used for her book, Sharon's nose definitely looks more narrow to me later on in her life. Not that there's anything wrong with it. LOL.

My bad Sunset. I guess I confused you with someone else.....

Not that I'm doubting you Katie, but could her nose have just looked different due to her face changing shape through the years?

I'm goig to have to really look at her photos now!

Could be Venus. Her nostrils just look smaller to me in later years. I could be wrong about that. I've never read that she had a nose job, but I've always wondered.

She also seems to have higher cheekbones and a smaller chin in later years. I don't know, maybe it's just me.

I was told by a makeup artist years ago that the width of the bottom of the nose (nostrils) is exactly the same as the width of your eye. If you look at the photo of Sharon on Debra's book, her eyes seem to be much wider than her nostrils.

My posts don't get through anymore - Helter Skelter

Louis, this blog has the comment moderation on, which means that if you are not a member, your comments will have to be published by an administrator.

I try to check comments that need publishing as often as I can. But sometimes it may be an hour or two. Which really sucks, I know.

If you want to comment on this blog without moderation, please e-mail Lynyrd and ask for an invite to be a member. If he sends you one and you accept, you're in like Flint.

I can't argue, with your logic.

If this guy is making parody movies on a regular basis, he must be enjoying enough sales to cover his production costs, and turn a profit.

Let's face it... if he was losing money on these movies, he certainly wouldn't continue making them.

Personally... I just can't see how he's doing it.
Evidently, there's a bigger market for this stuff in 2014, than I would have guessed.

Katie, you may be right about Sharon's nose. I just saw a picture of her in high school in Richland, WA. Her nose looks longer than it did in later years. There's definitely a difference.

Carol, I really think that Martin Ransohoff advised her to contour her face with a nose, cheek & chin job before she did Eye of the Devil. You can start seeing the difference in her face along the time that movie came out. He might have even paid for it.

I don't have any proof of it, but I can see the difference in her facial features. The difference is subtle, but it's noticeable. I've always seen that difference, but never commented on it before.

"These films are nearly impossible to find online for free"

"If you want to comment on this blog without moderation, please e-mail Lynyrd and ask for an invite to be a member. If he sends you one and you accept, you're in like Flint."

And all this time, I thought I WAS a member! lol

Katie, since you mentioned the nose job, I've been comparing pictures and I think you may be right about the subtle work done on Sharon. And I agree that if she had any work done, Ransohoff paid for it.

Thanks Carol, I agree!

Well I went to Barnes & Noble today to buy Debra's book, and they're already sold out. I had to order one.

@Louis365, I looked up the Brady Bunch Marcia, Marcia, Marcia one with a simple Google search. Nearly every page had several of these messages on them:

"In response to a complaint we received under the US Digital Millennium Copyright Act, we have removed 2 result(s) from this page. If you wish, you may read the DMCA complaint that caused the removal(s) at ChillingEffects.org."

I didn't look for the other ones, maybe they are online, I don't know.

Finally, I may try to make another post about this Manson parody movie later in the year. I emailed a person with knowledge of it, that person replied and told me to reply back later. I don't know if they will reply again later or not.

I don't know if she had surgery on her nose or chin or not, but it's quite possible! It was pretty common.

As for the cheekbones....I know that I alwsys loved defined cheekbones and wanted them. Lo and behold, when my baby fat left my face, there they were!

Sunset77 ...When you said you couldn't find these movies online for free, I was thinking in terms of torrent sites or what may be called "Downloading" One of the biggest such sites is thepiratebay.se. I have gotten so much from them it's not funny.

Incidently, the founders of that site are currently being held in prison. The powers that be have been after them for years. But Sweden, where they are based, doesn't have copywrite laws, as I know it.

Anyhow, the site continues on.