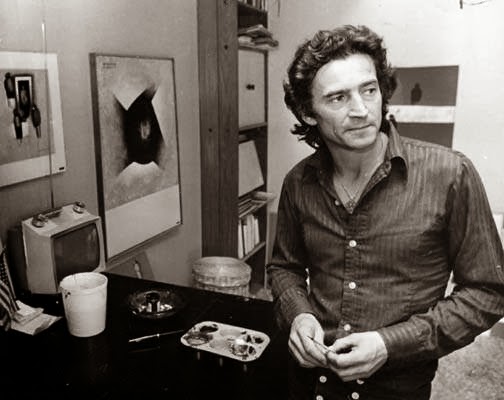 "The artist Witold in his studio on August 27, 1969.  A Polish emigre, he was an early police suspect in the Tate murders, and was under a 24 hour guard" -- "Murderpedia" website

Pronounced "Vee-told", Witold Kaczanowski (aka Witold-K) has apparently had a long and successful life as an artist.  I ran across a "word" document that says this:

He "is recognized throughout the world as a painter, sculptor, designer, architect, university lecturer and political activist.  He and his father survived the Nazis and WWII, and his father also saved many Jewish lives. Witold was chosen at the tender age of 25 as the architectural designer and muralist for the Cultural Center in the city of Oswiecim, built near the Auschwitz concentration camp in remembrance of Holocaust victims. In 1964 he smuggled the literary works of dissident Russian and Polish writers into the West, and as a result was banned from his native Poland.

His art spans international shows including the prestigious 1973 retrospective at the Otis Art Institute in Los Angeles, and hangs in galleries around the world. He has had his own portrait painted by Picasso. He has been a long-time friend of film legend and fellow Pole, Roman Polanski.  He has created art for the Aspen Music Festival, the Denver International Film Festival, and the Colorado Symphony.  He has collaborated with renowned physicist Stirling Colgate in seeking a new understanding and expression of the bond between of science and art.  He is the first American artist to have a one-man show at Sotheby's (Amsterdam, The Netherlands, 2007).  And this is just the beginning............."

The "First Tate Homicide Report" says Frykowski invited Kaczanowski to the house at 10050 Cielo Drive on August 8, 1969... twice.  The first time, earlier in the day when they were at Kaczanowski's art gallery, then again later.  At a time estimated around midnight Friday night, Frykowski telephoned Kaczanoski presumably from the Tate house.  Frykowski wanted to know why he wasn't up to the house yet.  Kaczanowski declined the second invitation, as he wanted to work late and remained at the gallery.
Posted by sunset77 at 9:28 PM
Labels: Witold Kaczanowski

Thank You, Sunset.
This is an interesting post.
I don't believe, I've ever seen a thread on this particular suspect before... and if I have, I certainly don't remember it.
Kudos.

I'm not really sure how I even ran across this, I was probably reading the First Tate Homicide Report and seen his name.

Polish names are often difficult which is probably why he is known as Witold-K.

He could have easily been at the Tate house that night, apparently he just decided to work late. Frykowyski apparently called him on the phone around midnight, I suspect not long before Watson cut the phone lines.

I think I read he was held on "house arrest" for several hours or maybe a few days. It was probably one of the luckiest decisions he ever made to work late than night.

Wasn't that the guy who was living in Gibby's Woodstock home?

His art gallery was on Wiltshire and had a dress shop beside it or the dress shop was part of the gallery, not sure which.
Always wondered if Rosemary had anything to do with it.

Did Witold-K tell the police that Voytek invited him to Cielo? Is this just another case of someone claiming to have dodged a bullet?

He kind of looks like that guy that plays Wolverine.

My sister was supposed to spend the night at 10050 Cielo Dr that night but she wasn't born yet.....