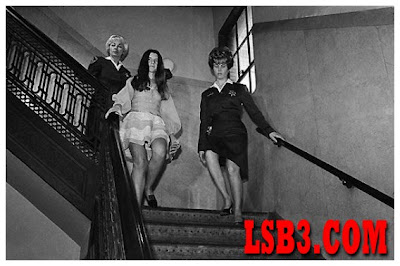 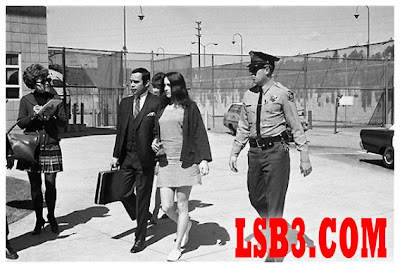 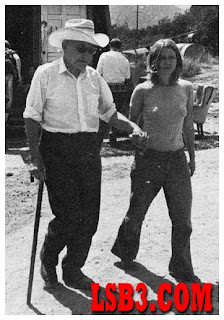 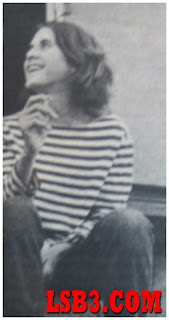 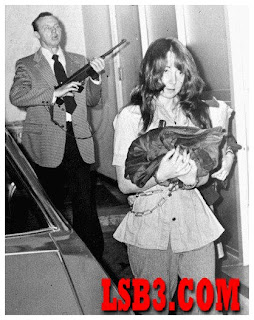 How come they let bitches walk around without handcuffs, ankle chains and orange jumpsuits?

Except Squeaky.....motherfucker got an automatic rifle ready for her.

All for show Tom G

The media loved it...

The media loved it?

Everyone I know loved it. 1969. CBS. Walter Cronkite. We aren't safe in our hood, but neither are you!

As unpopular as this is, I know for a fact they wouldn't let Manson shave or bathe for quite a while after he was arrested at barker. The authorities wanted to show him as a dirty hippie, which the media ate up.

Charlie Manson isn't really a clean up project. He is an entertaining little schziophrenic and when the camera comes on, he does his herky-jerky dance and says something about the air and water.

And somewhere he is sitting in a dark cell, mumbling about storms in Mayaysia. Just don't take his guitar away from him, because that will really make him mad, I swear to GOD!

Charlie Manson always has one more quarter, one more phone call to make. He will outlive most of his haters......let me show you how that nickel rolls.

If I were to comment, I'd probably say that the young ladies back in the 60's had an Ardennes Forest growing down below, if you know what I mean. And not a goddamned tatoo of a coyote.

More so, the music back then had a rhythm, it had lyrics, it told a story, it had a message. A positive message.

Sad to say, in my opinion, the hip hop, rap music today doesn't tell any kind of story and isn't positive.

But that's my shit. Now what were we talking about?

Did anyone watch "The Devil's Business" on the ID DISCOVERY show Twisted? No new info, but still interesting. Phil Kaufman was interviewed as well as Barbara Hoyt, Bugliosi, several psychologists, cops, and the doctor who ran the free clinic and treated some of the girls. There was a glaring error, though, in the beginning. Police Officer Burnbridge was recounting how on the morning of August 8th, 1969 he received a radio call about the murders at Cielo. It couldn't possibly have been August 8th. This show made me almost - almost - feel sorry for Charlie. What a loathsome upbringing. His mother tried to sell him to a waitress for a bucket of beer? Geez...
No fun for a child to know he is not wanted by anyone. Still no excuse. He and the others had a choice. The show also made the Helter Skelter theory sound plausible. Manson still had no record deal, he was full of rage because of that, there were chinks in the armor of his "family," some members were beginning to doubt some of what he was preaching, he shot someone (Crowe) who he thought was a Black Panther, etc. Kaufman was interesting. He said when Manson & Co. were arrested, he couldn't believe they were capable of such violence. Kaufman said he lived with, did drugs with, and slept with these people who perpetrated this violence and it was just unbelievable to him. Bugliosi said he didn't believe Manson started out with murder in mind. He thought things just got out of control for Manson at some point and Manson always had to be in control.

I was lol-ing at *Charlie's Angels* and then I felt bad, cuz it's more like Charlie's Demons.

Anyhoo, the only thing I really want to say at this point is...Patricia is bufugly. I'm not into ragging on people's looks, but damn!

Lynyrd, I never thought Brenda was attractive until I saw some pics of her on her and other places. I'm sure she cleaned up nice, but she's got the *dead eyes* thing going on.

There is one scene in the Hendrickson video when a few of the girls are sitting in the grass sewing. The wind is blowing all around them and they are laughing and smiling and they look very very peaceful, and even feminine.... They are playing a Crockett/Posten song in the background and it is the one time I ever remember sort of understanding the bond and family they had among themselves. they look very content...

at the beginning of the same video is the infamous scene with Squeaky- Nancy- and Sandy with the shaved heads holding the rifles...

It is hard to believe these are the same girls...

some of the video and pictures make them look almost robotic I swear. The dead eyes description is very accurate. There is almost nothing left of the innocent young girls in them you see in some of there school pics and such. It is scary. But it is not charlies magic. It is dirty living combined with malnutrition and constant drug use. There was disease spreading among them, and various skin issues....

The before and after is scary

There wasn't one single person of either sex in that group who should have been able to convince a normal person wondering into that mess to stay...

Isn't that Catherine "Cappy" Gillies holding hands with Spahn? Not even mentioned in the "labels" of this post? Kinda disappointing, look at her body.

It seems I read a news clipping where she testified in some trial, they asked her if she would be willing to kill for Manson, she said, "You bet".

Thanks Carol, I wasn't able to see it..... Kind of neat they were able to Get Phil Kaufman to participate...

Yeah Sunset Cappy has always remained true blue and able to keep out of the media except for good ol Bill Nelson...

Hey St..... You said "a song by CrockettPosten". Did you mean Watkins or is there something I've never heard, that crockett sing with them too?

By the way Lynyrd, I'm posting using a cell phone and it sucks....lots of mistakes in grammar and spelling....sorry....no Internet for another week....

Will have to deal with boo boos until then.....

Kimchi, I was hoping the TWISTED program would be re-run, but it doesn't look like it will be.

Gloria is a drunken inbred like the rest of us!!


The All in the Family actress, 65, was arrested for drunk driving, specifically on an "OUI" (operating under the influence) c

Reportedly cooperative at the time of her arrest, Struthers, best known for her role as Gloria (opposite Rob Reiner as "Meathead") in the classic 70s sitcom, was released after posting $160 bail. She has been in the northern New England state performing in a production of 9 to 5.

Thanks St. I wonder if she did her famous "Gloria wail". LOL.

Marliese, thanks for "The Devil's Business" re-run info.

Thanks Carol and Marliese...someone was supposed to record it for me as I will miss the one on the 15th too. :(

If you don't want to e-mail me that's fine.

I was just worried. Most times worrisome is for naught. That's what my kids always say. STOP WORRYING. You're like just like a Mother Hen. LOL.

Charles is out of the hole... saw it on "Manson Direct".