Trekking Through History: In Search of the 'Manson Caves'
By Reza Gostar - November 29, 2011 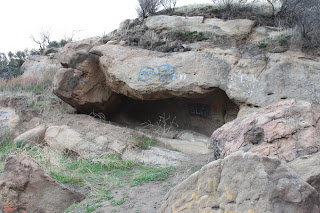 The Santa Susana Mountains encompass thousands of acres of pristine chaparral habitat, but within their seemingly peacefully rugged beauty and rich history hides a dark past.  Located inside what is now Santa Susana State Historic Park, Spahn Ranch (also known as the Spahn Movie ranch) was the site where Charles Manson and his followers hatched the infamous Tate-LaBianca murders. 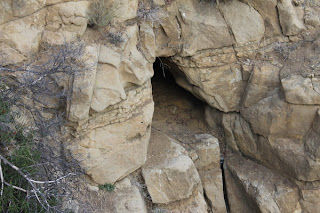 Once used as a filming location for various western-themed movies and television shows including the Lone Ranger, Spahn Ranch was named after its owner, George Spahn, who bought it in 1948.  Spahn allowed Manson and his followers to live on his property between 1968-1969 in exchange for work and sexual favors from the group’s women. 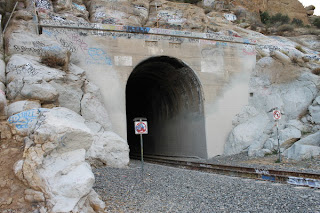 According to the book Turn Off Your Mind: The Mystic Sixties and the Dark Side of the Age of Aquarius by Gary Valentine Lachman, Manson was very keen on tunnels and caves, and would actively search for a hole that would lead him and his followers to an underground city were they would sit out Helter Skelter or their version of the Apocalypse. 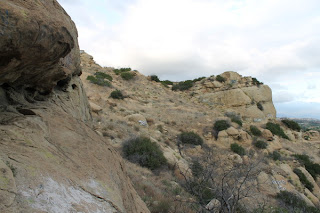 It is important to note that some say the hole Manson was looking for was located in Death Valley and was nowhere near Chatsworth. Despite this fact, however, rumors, myths and urban legends have led many to the hills above the Chatsworth Trail tunnels to seek out the lore and history of the Manson Family. 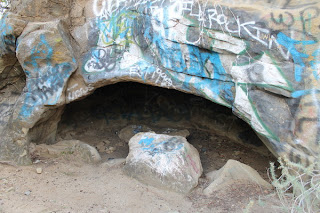 One of most popular entrances into the area is from Chatsworth Park North. To get there drive north on Topanga Canyon toward the 118 Freeway and make a left on Chatsworth Street. Follow street signs leading to the easy-to-find park. From the parking lot, head across the basketball courts toward the back picnic tables and begin your journey there.

The area is ripe with spectacular sets of rock formations and requires some minor climbing and bouldering to move beyond trail tunnels, which can be accessed relatively easily.  Despite the fact that the area has been defaced with graffiti, it’s still beautiful and rich with life.  Moving through laurel sumac, a variety of sages and coyote bush, the path moves past the Chatsworth train tunnels, and signs of the urban pollution soon dissipate in the distance.

Upon exploring the area, one will soon discover an abundance caves—whether any of them were actually used by Manson or his followers may never be known.  Regardless, the journey is still worth taking and remember, there is no actual path, so it does help to carry a compass in case one does get disoriented.  After all, you wouldn’t want to get lost in these hills especially after dark.
Think you have found the actual Manson Caves? Share your photos and stories below.
==================================================================
A Reader Comments: (better than the original article actually)

Handsomish - Posted - 10:06pm on Tuesday, November 29, 2011
"The Manson caves were on the west side of Simi Valley. We used to go exploring them and they were actually quite creepy. For reasons beyond the short history of that crazy group. There were tunnels from where the water had eroded the earth that you would slide down into larger rooms. The tunnels were so narrow at some points that you feared getting stuck. There was no way you could climb back up the way you came. There were also many choices of tunnels, so you had to make sure you went down the correct one as well. You had to trust the person who guided you. When you reached the last room, you had to climb a rope of about 30 feet in length to get out of the cave. I only did it once, had no desire to relive that tension. Cement was eventually poured into the entrances, and the exits sealed as well to prevent, we presumed, rescue calls from those stranded inside. But it just as well may have been to prevent the seekers of the macabre".
http://calabasas.patch.com/articles/trekking-through-history-in-search-of-the-manson-caves#c
Posted by LynyrdSkynyrdBand at 1:32 PM
Labels: Manson Caves

It's too bad that people have sprayed graffiti all over the landscape. What a shame.

I was actually thinking that myself.

When I have a chance, I'll do a search over there... a maybe pull a related video (or two) forward.

Here's the first of a 7-part series of Michael exploring the caves.

Some segments are better than others.

This is actually pretty cool stuff too:

I KNOW I've seen Michael at the entrance to that train tunnel before... but, it'd take me forever to find.

While everyone's over there, check-out Stormsurge in the comments section, saying Hello to Leatherface!

Hi Bing! I think I've seen some of those videos. Good stuff!!

Lynnette was Squeaky, Patricia was Katie, Susan was Sadie, Catherine was Gypsy, Nancy was Brenda, but I think Sandy was just Sandy, Bruce was just Bruce and horseteeth was just "hey you". HA HA.

If you read through the police interrogations and court transcripts, you'll find that most family members didn't even know most of the other members' real names.

Did Charlie actually nickname some of the people and not others...and did each family member think of their own various aliases?

Leatherface is looking up at Stormy with his arms crossed...."I told you not to start smoking those things".

When they get talking back-and-forth for lengthy conversations... it can be really funny.

Leslie was LuLu.
Sandy was "Blue"... and a couple other aliases, when trouble (police) arose.

As for Bruce... I can't think of any nicknames off-hand.
He's one of the very few exceptions.

I'm quite certain they all knew each other's real names.
They intentionally gave false names frequently... example, the 8-16-69 raid.
90% of the arrest shhet, is all bogus aliases, and variations.

Was Sandy "Blue" back then? I thought that name was given after conviction.

Lynyrd,I really don't think they knew each other's real names. I really think that in this "family" they chose to live with nicknames or aliases, rather than even use their real names. Especially when more people joined.

For being a high school princess and quite popular in high school, Leslie Van Skankston was evidently very unpopular in the family.

I think her only friend there was Pat.

Correct me if I'm wrong, but I haven't seen any pictures of her with family members before her appearance at the trials.

I think that is why she was so determined to go out the second night. She wanted to belong for once.

I heard Charlie say (maybe in an audio with Michael) that one of the reasons the girls had other names was because he couldn't remember their real names at the moment he needed to...so he just said "hey Katie" or "hey Sadie", and the name stuck....

>>>I heard Charlie say (maybe in an audio with Michael) that one of the reasons the girls had other names was because he couldn't remember their real names at the moment he needed to...so he just said "hey Katie" or "hey Sadie", and the name stuck....>>>

Well that's interesting. I hadn't heard that before. Hmmm..... LOL.

I never put much effort into learning the names of the girls, I was having sex with either.

That's how, Katie got her name.

I just kept calling her Katie... and it stuck!
AHahahaha

My dad could never remember a name either, I was usually called "Jo" or "Sis"...what the hell, I answered to both..

I think the motto at Spahn's was basically:

"Call me anything you want... just don't call me late for dinner".
LOLOL

Charlie must've been great with introductions...

I'm sorry Kimchi.
I know you're trying to be serious.

Hey, did you watch the "San Quentin" video Michael has up right now? They had the "Best of the Animals" playing in the background..one of my favs...

Lynyrd you know I have a lousy sense of humor...LOL but I do know when you're kidding :P

Ya know... I DID see the San Quentin video on his main channel page, and figured I'd watch it tomorrow.

I don't suppose they allowed cameras inside huh?
Probably not...

Yeah they did - at least in the museum part..

Any footage of the museum coming-up?!

>>Lynyrd said: That's how, Katie got her name.

I just kept calling her Katie... and it stuck!
AHahahaha>>

Now wake up and go to sleep. And quit hogging the bed! LOL.

And I want my usual in the morning. Eggs over easy, buttered toast, sausage links, orange juice, hot coffee and the NY Times.

We can always go back to "Beebopaloobop" if you want.

This is going nowhere good...

But, I'm in one of those moods.

Well if you're REAL nice, we can use the unmentionable....and I'll call you what you want me to in the throes of passion....TROMBONE!

My mother used to tell me when you laugh really hard, you release endorphins, which is a pleasurable chemical into your body which continues well being.

I'm convinced that people who laugh all the time live longer.

Did Charlie actually nickname some of the people and not others...and did each family member think of their own various aliases?

Katie, I think George Spahn gave some of the nicknames. In Watson's book he says something about Spahn recognizing his Texas accent and calling him "Tex". He also gave Squeaky her nickname because of the squeaky sounds she made when he pinched her inner thighs. I also seem to recall but could be wrong that he gave Ruth the "Ouish" name

....By the way Lynrd & everyone else who contributes, love the blog, thanks for all your hardwork and dedication you put into it

Hi Bing! Thanks for the appreciative note. Glad to have you!

You're right, George did nickname Squeaky and Tex. I'm not really sure about Ruth either. I have seen several people debate on how she acquired her name.

What's really funny is that everyone seemed to just call Charlie...Charlie. LOL.

Welcome to the blog.

Glad you're enjoying it!

I'm looking forward to your contributions.