Debra Tate's Daughter... Arieana Mussenden!
Maybe someone could cast her in their next movie! LOL
Click each photo to ENLARGE. 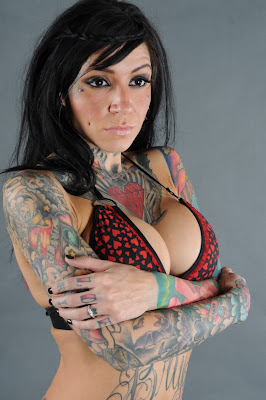 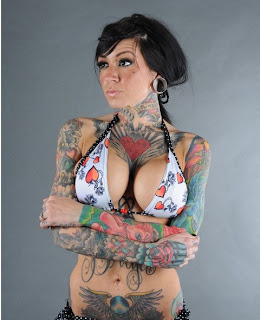 Editorial
Fashion
Fetish
Glamour
Lingerie
Pinup
Runway
Swimwear
Underwater
Arieana's slef-description at:
http://www.modelmayhem.com/1857074
About me...
Name's Arieana. I am a young aspiring clothing designer/model. I find inspiration through all aspects of art. How could you not its a beautiful thing?
I really love creative people and working with them. Im a easy going goofball that always loves a challenge. I’m looking forward to working with many different people and taking in each experience to build me into a well rounded model/designer I am becoming. Contact me if your interested in working together! I also am always looking for make-up and hair stylists as well ! 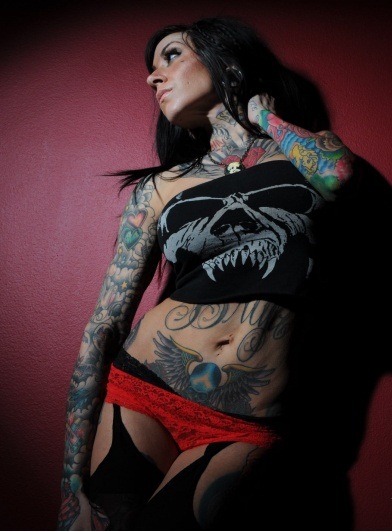 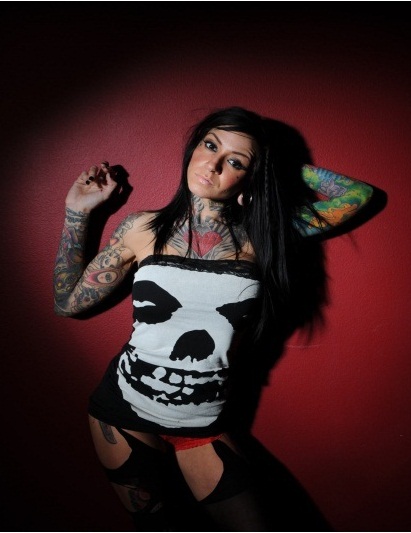 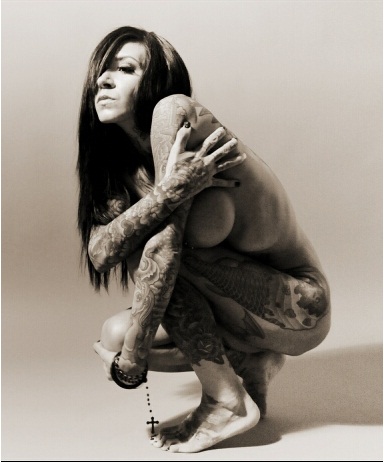 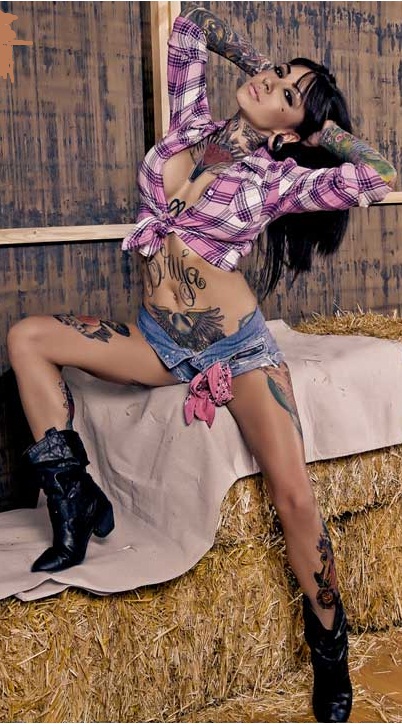 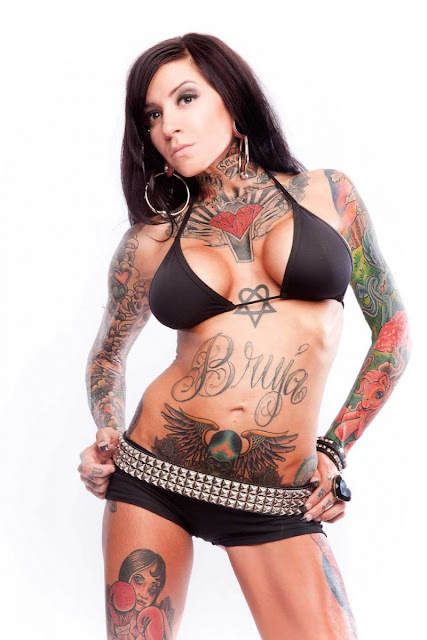 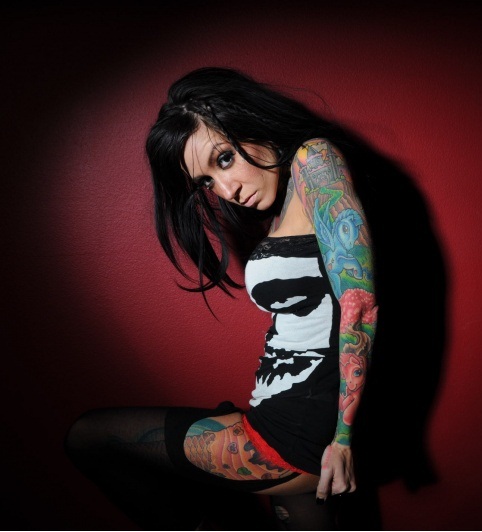 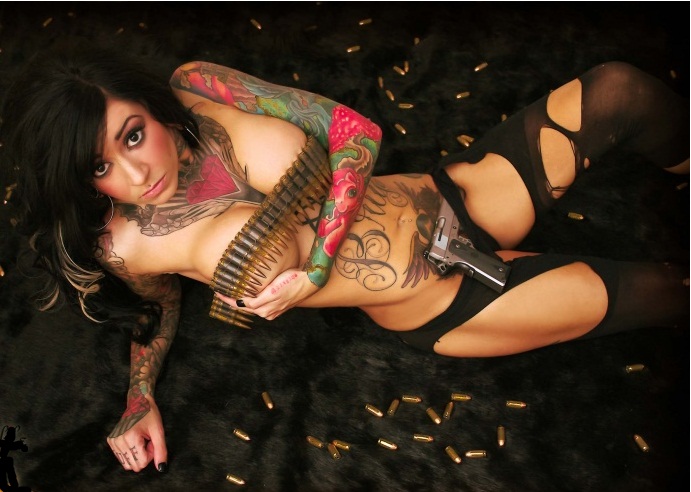 Surely there must be someone out there in blogland involved with the movie industry... who could give Debra's young daughter her first big break in Hollywood. LOL

Now, wouldn't THAT be a Hoot! hahaha

I can see the headlines:

Heck, I'd cast just the breasts...

If a girl has nice breasts, I usually give her a bye on anything else she has wrong with her...

and she looks like she has an issue or two.

She has the best breasts money can buy!

Looks like somebody ran out of inking marking her up. HA HA.

Boy those Tate women have a hard time keeping their clothes on. LOL.

Looking at those photos, Harold True's words (regarding another young lady), rang in my ears:

Like you always say Tom... many young folks may have been enamoured by that "big black bus" given the right place, amd the right time.
Arieana looks like one of those "susceptible" types to me.
But again... who knows...
You can't judge a book by it's cover, and many of the Manson followers were pretty 'clean-cut" to start.

(That oughtta get everyone fighting) LOLOL

Look at the lower photo...

baby got calf....a gift from her mail lady mom!

"Baby got Calf"! LMAO
She DOES!

A mixed up woman is one of the most interesting things in life.

Second only to baseball.

I wonder if she's ever met cousin Rosie?? LOL.

alot of people in this saga have made left turns.

Did you guys see "Meet the Parents", when Greg spills Deniro's (mother's) ashes all over the dining room?
LMAO

She left off her resume that she also does bachelor parties, Barmitzvahs and funerals. HA HA.

Raise hands for those who would rather see Arieana at Tex's parole hearing! LOL

Those are two very large... err, I mean, strong arguments M'am!
Bailiff... off with his fucking head"!!
LOLOL

Yeah I saw that Lynyrd.

Maybe that's where Col Tate's ashes are..in the dining room. Must have the whole family together at dinner.

"You're gonna eat with us whether you like it or not."

I think if Arieana showed up at the hearing, Tex might just try to manage to "stay in" so he can see her again in another 5 or 6 years.

Or maybe he'd try to put the moves on her.

"Baby, have I told you about my prison ministry? Step into my cell and we'll go over some literature." LOLOL.

Boy those boobs look like they're inflated up to 30 psi.

I'll bet if you stuck a pin in those things, she'd fly around the room backward for 15 seconds. LOL.

The heck with Debra sniffing Sharon's clothes out of a footlocker... I wanna see Arieana modeling them!

Now THOSE photos would be worth some cash.

Liz... get on it!
AHahahaha

Bring me photos of Arieana, in Auntie Sharon's panties... and I'll plug your blog (on my main page) for six months!
LOLOL

Are we on?
LOL

All kidding aside... Arieana is an attractive young lady, and I wish her much success in her career, all her endeavors, and beyond.

I wish Debra the best as well.
It's all good...

I wish them both well, going forward.

She seems like a nice kid to me....aside from all the tatoos.

Are you guys kidding? She looks like a biker chick. I'd hate to run into her in a dark alley.

There's more ink on her than on the Declaration of Independence.

"I'll bet if you stuck a pin in those things, she'd fly around the room backward for 15 seconds. LOL."

Them thangs are more than a mouthfull, that's fer sure...

Yes those are indeed more than a mouthful. Unless, I guess, for Steven Tyler. LOL.

You know, all kidding aside, she is a pretty girl. Why go into all that "imagery" and sullen looks.

Why not keep it clean cut and go for the gold?

She looks like she's competing to be Jesse James' next conquest.

Now for the Boob Comparison Contest:

I believe Arieanna's globes are likely fake.
I mean granted, they're gorgeous, but c'mon...
those things look WAY too perfectly shaped, and overblown.
They look like balloons.
Those nipples must be hard as rocks!

well at least she's not living off auntie sharon's notoriety. katie i haven't forgot the info. just been busy.

You've got a good point there. She's not even using the Tate name to get attention.

Thanks for all your help!!

I was going to leave a snarky comment about this girl but I changed my mind because she is an easy target and I know better than anyone what it is like to be judged on your appearance alone.

Having to deal with all the preconcieved ideas people have about you based solely on how you look is no fun at all...well sometimes it is fun but generally it sucks.

The reality is we do not know Arieana personally, perhaps she is articulate, subversive in her art and in control of her sexuality, or she could be just another empty, vapid girl making life more difficult for me and other women, I myself hope its the former.

I agree with your comment about being judged on your looks.

I don't know about Arieanna, but I always feel that if people have real talent, they don't have to try to look outrageous to get attention.

One or two tatoos can be "cute" but to have your whole body painted up is not very attractive and lends to someone who doesn't have enough belief in themselves to make it without all the attention.

I wish people would realize that they can be much more attractive without all that ink.

i do wonder what grandpa tate thought of this one? if he disowned her mother for corvorting nude with a drug addict, he must have really tripped out over her. i wonder what sharon would think of her? mrs. tate was probably spared though as she passed away in 1992 and arriena was still probably her little princess.

I don't know why she chose to mark herself up this way. Maybe she genuinely likes it? She'll probably regret it all one day when gravity starts to sink in and those tats are hidden in folds and wrinkles. Now there's an image for ya! I hope nobody was eating dinner!

Why do all that to your body? It's so unattractive. Plus I would think it's dangerous. Don't they put ink in your veins??? Gross!!!

And I would think if you changed your mind when you got older, there's probably no undoing it.

Katie, I had a relative sho was just a youg guy during WWII, the other guys in his unit were getting tattoos and talked him into getting one. It was on his forearm. I remember him hating it because, unless he wore long sleeves, you could always see it. The worst part? Once he was in his 50's, it started to seep fluid. This was one of those tattoos that was the blue-gray ink. He went to several Dr's who couldn't explain why it was doing that. I remember him keeping a washcloth or small towel with him to keep blotting up the fluid. He always said it was one of his biggest regrets. While I can say that some tattoos are attractive, they've never really interested me. After seeing what he went through, I knew I'd never get one.

It's hard to believe that this young woman is the same age her Auntie Sharon was when she was killed. She looks so much older and has a harder look to her. I'm pretty sure her natural hair color isn't that dark, I wonder if she's softer looking with lighter hair.

Venus, I agree. I think getting tattooed is a big mistake. You can't get rid of it, especially when it's over 80% of your body.

She does look rough. And yes, I'm sure she dyes her hair and eyebrows. She's got deep creases on her forehead and she seems to frown a lot.

How could you be that serious and cynical at 26???

Wow. She is so "Orange County"! It seems to be the trend there. The "trying so hard to be different that they end up looking the same" look is very popular amongst the gals whom live in the "OC". Does she live there? I betcha she does....

Arieana i miss you, its jared... i dont have your number anymore and was almost gonna drive out to your mothers to try and get in contact with you...hit me up on facebook if you ever get the chance, hope your doing well

Those tats won't stay bright forever! Won't that be a pretty sight? She looks like white trash.

yuk she's as gross as Chloe Lattanzi and as pathetic