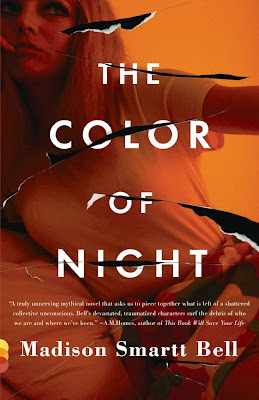 ﻿Alright, now this book I can almost confidently characterize as literature!
The Color of Night, I believe, might be a very interesting and enjoyable read for many of the Manson Case blog followers out there...especially those who can't see ever granting parole to any of the murderesses because they believe that they are evil through and through...
Because Mae, who narrates the story, is indeed evil...at least she does lots of evil things...even years removed from being a member of The People which is the thinly disguised fictionalized version of the Manson Family. Imagine that Sadie escaped from the authorities during the Spahn Ranch raid and remained at large up until at least 2001, a couple of months after the 9/11 attacks happened. That's your protagonist, a black jack dealer working in a Nevada casino, living in a trailer park out in the desert, hunting coyotes (or not) until the early morning hours.

Mae discovers that Laurel, her special lover from the old days, is in NYC, seeing her in the footage of the attacks on the World Trade Center. Mae can't get enough of the violence of 9/11. She makes a loop tape and watches it over and over again...reveling in the deaths of so many as they are sprung out of the buildings as a result of the planes slamming into them.


And perhaps Mae can't help being so evil...after all it was her brother who repeatedly raped her when they were both young teenagers, and their parents, her mother especially, aren't exactly the greatest influences either. Sound familiar?

So If you choose to read this book, and I hope you will, perhaps it might enlighten a discussion or two about what we think about the survivors of the Manson Family...what they must be like today, and also whether we feel differently about those women who have been in prison for 40 years or so now.

And the LA Times has a much better review than I could ever do here:
http://articles.latimes.com/2011/apr/12/entertainment/la-et-book-20110411
Thanks Starship!!  Great Review!!
Posted by LynyrdSkynyrdBand at 2:00 AM
Labels: Book Review, Color of Night by Madison Smartt Bell

Am I the only one who envisioned Katie immediately, after reading Starship's first paragragh???!!! LMAO

C'mon... admit it... everyone thought the same thing.

Starship-
"might be a very interesting and enjoyable read for many of the Manson Case blog followers out there...especially those who can't see ever granting parole to any of the murderesses because they believe that they are evil through and through"...

Katie... this book may very well be "tailor-made" made for you! LOLOL

One thing I need help with...I read the kindle version of the book, but is that a picture of Sharon Tate on the cover?

I thought it was, and I was a bit confused when I first began reading it because the Family is fictionalized as the People, names changed, etc...although most of the details remain close enough that there isn't a doubt as to its inspiration.

Hi Starship. I was wondering the same thing. Is that Sharon Tate on the cover?

Would this book indeed change my view of the killers?? LOL!

Would this book indeed change my view of the killers?? LOL!

I don't think so...I hope you will read it though, Katie. I think we could spend hours discussing...

I'll look into that for you.

I'm really "strapped" for time today and tomorrow, but in the meanwhile, I have one suggestion...

If you click the photo of the cover twice, it gets really huge... the second click is the key... it expands the photo much larger.

Looking at the large photo... (and I'm no Sharon expert by any stretch)... I don't think that's Sharon.
Just my guess based on the photo itself.

I'll find out for sure though... give me a day or two.

Hey Starship, do you think this is available at Barnes & Nobles? Maybe the library? I don't know how new this book is.

Lynyrd, I double clicked the photo and I don't think that's Sharon either. I think Sharon had bigger breast-isiss. LOL.

An earthquake hit the east coast today, caused some damage and scared a lot of people

I hope everyone is okay out there on the east coast! :)

It seems to me that the book has an interesting plot. What is evil?
What is it that make some people evil?
Is the violence in some way wrapped up in our culture?
Are we defenceless against it.
Charles Manson: "How much evil do you think it would take to create peace on earth?"
But I must point out that the Tate/LaBianca murders can´t be explained by such simplifications.
These people that commited the murders has not even today the slightest clue of why they did it.
They are not any mutant killers. They are common people who happened to stumble upon something they couldn´t handle. Of course they are responsible for their deeds but that dosen´t explain why they did it.
It aint exactly clear how Manson´s followers understood him. Perhaps, as he claimed, they took him more literally than he intended. Perhaps they heard things spoken through him which he never intended to say? Helter Skelter. Ouish, saw that both interpretations were possible. She told her friend Barbara Hoyt, “We all have to go through Helter Skelter. If we don’t do it in our heads, we will have to do it physically. If you don’t die in your head, you’ll die when it comes down.”
It´s sometimes difficult to seperate literal and imaginary pictures from each other.

Starship... I spent one solid hour, turning cyberspace upside-down, trying to locate the name of that model on the book's cover... to no avail.

I "googled" everything I could think of... zero.

Folks... this has become a QUEST! LOL
I want that woman's name!!

First one to find that woman's name... free admission for a year! LOLOL

Hey all! Just found out that after 18 years the West Memphis 3 have finally been released! For more info check out www.wm3.org!

Hope all u on the east coast are OK after today's "earthquake"
Here on the west coast anything under a 6 barely gets noticed, but if you've never felt one they definately freak ya a bit!

I did feel the quake a little bit, and yes, it was somewhat un-nerving.

I heard about the "West Memphis 3" a couple days ago, and Matt mentioned it on the blog.
Admittedly, I don't know anything about that case... so, the news didn't reverberate with me at all.
But evidently... it was VERY big news in some circles.

Great to see ya Lurch... Peace.

V717, you have made some good points. I agree that the killers had no idea back then, nor do they have any idea now, why they killed complete strangers.

Tex has indicated that Charlie told him directly to kill. Charlie denys this. What really happened between those two, only they know.

I do believe they killed for Charlie...whether he ordered it directly, or he only implied it.

Hi Lurch. I don't know much about the West Memphis 3 either. I just read that they were in prison for murdering 3 boys I think, and recently were told that if they plead guilty, they could go free.

I'm not really sure why that would happen. Can you expound??

Katie8753
Maybee they thought they killed for Charlie. But still we haven´t a motive.
This case is more complicated than you can think of. This has to do with the unique personality that Manson is. He is on many different levels at the same time.
Manson: "I´ve been to places that you don´t even know exist"
Manson see the outside world as a chimera and the only reality there is is in the mind.
If I find the words I will "try" to explain that in full detail at another time.

Hi V717. I know this case is very complicated, but I don't really think it has to do Manson's personality or thought processes as much as it has to do with the fact that Manson is a liar.

We haven't figured out a motive yet, or maybe there are several motives. Unless or until Manson starts speaking the truth, we probably will never know.

Katie 8753
Hi V717. I know this case is very complicated, but I don't really think it has to do Manson's personality or thought processes as much as it has to do with the fact that Manson is a liar.

Hi Katie. I tell you. It has very much to do with Mansons personality.