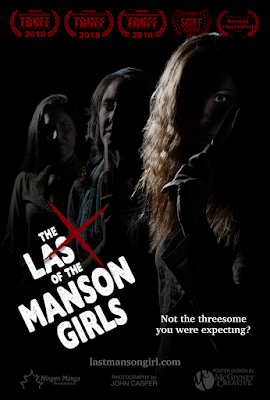 I’m contacting you to let you know my feature film The Last of the Manson Girls is currently available to stream on Prime Video.

A press release and poster are attached. I’m happy to answer any questions.


Feature Film 'The Last of the Manson Girls' Released on Streaming Service
After a successful festival run in which it took home seven titles, the Indie feature film The Last of the Manson Girls is now available to the public on Prime Video. It can be seen here in the US: https://www.amazon.com/dp/B07VYM4TL4 and here in the UK: https://www.amazon.co.uk/dp/B07VZNNKS7.
The film is based on the essay “My Acid Trip with Squeaky Fromme” by Paul Krassner, an American counter-culture journalist who published the freethought magazine The Realist and was a founding member of the Yippies in the ‘60’s. Mr. Krassner died July 21, 2019.
The Last of the Manson Girls takes place in January, 1972. Convinced there's more to the Manson murders than meets the public eye, counterculture journalist Krassner embarks on an LSD tinged investigation of the last of Manson's disci- ples: Brenda McCann, Sandra Good, and Lynette "Squeaky" Fromme. What he finds could change how the world sees the 60s... if he lives long enough to tell the story.
Posted by LynyrdSkynyrdBand at 6:56 PM
Labels: Manson Movie

Thanks Lynyrd & Lonnie. I watched the trailer, looks kinda funny.

I don't think Manson was a liberal. He was what he wanted to be. If it suited him, he was liberal, but if it didn't suit him, he was a gun-toting white supremacist, preaching against "blackie".

Happy Thanksgiving Katie! I am spending it in Oklahoma, my first trip here. Near the Texas border, there are lots of friendly people here.

Happy Thanksgiving everyone and wanted you all know there is a copy of "Sympathy For The Devil" The documentary on The Process on eBay starting bid 9.99. It is a great documentary and well worth it if you are at all interested in The Process. I saw it in a theater in Portland and it was great. Happy shopping to those going out for Black Friday.

Katie, I almost hate leaving back for California. Fortunately the two day drive is not bad, and we may hit snow in Flagstaff. But , you’all have been great down here, I saw you waving...

Be careful driving Dill. Maybe someday you can come back to stay in God's Country!!

Great news for California, that scumbag serial killer Lawrence Bittaker has died of natural causes. I will always have respect for Stephen Kay because he put that monster on death row. Of course he was allowed live an additional forty years on death row. Hopefully they flush his ashes down a toilet, he belongs in sewage. I will sleep a lot better tonight knowing he does not breath air any longer. If anyone reading this does not believe in death penalty, read what this this man and his crime partner did to a bunch of teenage girls, and you will change your mind. Also Katie I read that Douglas was being recast on B&B but I kept reading and his older brother is going to play an older Douglas on a future episode, our little Douglas is staying.

Lonnie, I watched your film and liked it very much. Is there a way to get it on disc?

Glad you enjoyed it, beauders! No disc plans as of yet. For now, streaming is the only place it's available. Thanks for watching!

I wanted to know while investigating, did you hear anything about a certain biker group
(not the Straight Satan's)
frequenting SPAHN RANCH when The Charles Manson Family lived there?

Also, any talk about a "construction site" that
Charles Manson had a
"crash pad" at?
Thanks

Hi Mario.
Most of the research done for my movie was through existing literature on the Manson phenomenon. In none of it did I come up with references to another biker gang besides the Straight Satans or the construction you're referencing. I focused more on events after the trials and convictions.

Ok, thank you for your reply ningenmanga.

I enjoyed the movie.

Katie I like little Douglas too, even though Hope is fixated on Douglas she's not spending time with her daughter.

I know, Beth has disappeared again!!!

Yes one would think that having lost Beth initially and all the crying and whining Hope did, that getting Beth back would mean Hope would never let Beth out of sight, but it is a soap opera after all and Beth will need much future mental health therapy for all this. Katie, do you know Maura West (Carly Tennie) on ATWT plays a great character, Ava Jerome, on General Hospital? I remember when Carly disappeared, I didn't know she was on pregnancy leave and I thought she was just gone. Then Jack and Holden go to Montana to get Molly and who walks into the room by Carly Tennie. I was never so happy to see a character come back as Carly. Maura West is my favorite daytime actress. Yes, I have a scary memory actually my memory is almost photographic. It gets stronger and stronger because I have pretty severe OCD. There is a gift in everything and that is how I view my OCD and memory connection. Have a great New Years everyone and the start of a new decade. I've had a year of sadness and depression after losing my mother and my Gypsy cat but now it's time to come back to a happy life and get on with it.

Have a great New Years Beauders!!! You're a great person and you deserve peace and happiness!!! :)

Katie do you live near Beaumont Texas? It’s near Houston. I’m reading a book Sinister Forces: The Manson Secret” Book 3 by Peter Lavenda and he claims that a lot occult things are going on there. Does Interstate 45 run through there. That’s the freeway that all those women are missing from.

No Beauders I don't live in that area. I think I-45 runs from Dallas down through Houston to Galveston.

Katie, I don't know about you but I am really tired of the Steffy, Liam, Hope triangle and I haven't been watching that long.

I mean were Hope and Steffy scuffling over Liam when they were learning to crawl?

Beauders, I've decided that only women write the story lines for The Bold and The Beautiful, because no men on Earth would write story lines like this for men.

Liam looks like the biggest wienie that ever lived every single day. He is completely manipulated by every woman on this show.

I too am sick of Hope & Steffy fighting over this soy boy. Hope & Steffy are supposed to be strong women, yet they just crumble when it comes to Liam.

Let's get some reality on the show!!

Was there any factual basis for the search for N. Dite? I found that part annoying.

N. Dight was "Nathaniel Dight" in Krassner's memoir, "Confessions of a Raving, Unconfined Nut." It's a pseudonym for an artist who "conspiracy queen" Mae Brussell named as Tex Watson's alleged CIA contact. It's pretty deep cut (and I believe debunked) "alternate history," but here's a quote about it from "The Shadow of San Susana:"

"... Mae Brussell informed him that a Naval Intelligence agent named Nathaniel Dight had associated with Tex Watson prior to the murders... L. Ron Hubbard had been with Naval Intelligence. The Committee to Investigate Assassinations had linked Lee Harvey Oswald with Naval Intelligence! Even the infamous Zodiac killer had left obsolete Naval Intelligence ciphers. Dight, Brussell claimed, was a Postgraduate at the Navy's Monterey Language School --where only intelligence officers were admitted. Dight, she said, had used the cover of a 'hippie artist' while working as an undercover agent provocateur to infiltrate Charlie's Family.

"According to Brussell, Dight was the Manson Family's main drug supplier. After the murders, Dight, '... cut his hair, put his shoes back on...' and return to the Monterey Language School, setting aside his hippie guise, which had served its purpose. Prior to shedding these hippie trappings, Dight had done artwork for an 'undergroun'd magazine that, Brussell asserted, '... was a conduit for CIA funds for medical research in mind control, intelligence money for electrode implants and for LSD experiments, according to documents I got from the Pentagon.'"
(The Shadow Over Santa Susana, Adam Gorightly, pg. 151)

ningenmanga,
Thank you very much. It's been a long time since I read "The Shadow of San Susana". Now I can watch the movie for the second time without being so annoyed.

Orwhut, what movie is that?

beauders,
The Last of the Manson Girls.

I'm glad to help out, beauders.

I'm reading Samantha Geimer's book The Girl. I've only read about 3 chapters but I'm really appalled by the reality of it, including everyone involved.

I really enjoyed the movie. You did an excellent job with the characters. It was incredibly believable, and way to visualize each person. The tone, accent, content, and context for each member was spot on. Very impressive. They would end up serving prison terms in the future. The threatening letters for Sandra, Nancy for Willetts, Lin for Ford.

Thanks, Zepolarden. I did my best to represent the real people as honestly as possible. Glad you enjoyed the film.