Manson follower Patricia Krenwinkel's bid for freedom denied, despite claims he abused her 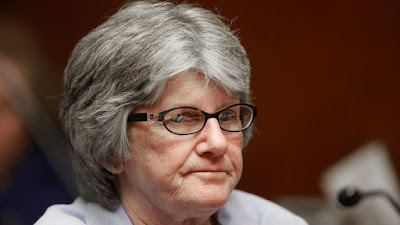 By Matt Hamilton and Richard WintonContact Reporters
Charles Manson follower Patricia Krenwinkel lost her latest bid for freedom on Thursday as parole hearing commissioners rejected a request by the state’s longest-serving female inmate to be released after a hearing in Corona.

The decision is the latest in a long series of repeated denials by Krenwinkel to secure parole on her conviction in a murderous rampage with Manson and other so-called Manson family members. But late last year, her attorney asserted new claims that Krenwinkel suffered abuse at Manson’s hands before the murders.

A Department of Corrections and Rehabilitation spokesman said Krenwinkel will be eligible to apply for parole again in five years.......

Last year, Krenwinkel’s attorney made new claims that she had been abused by Manson or another person.
At a hearing in December before the parole board, a source said Krenwinkel’s attorney, Keith Wattley, raised the notion in his closing statement that his client was a victim of “intimate partner battery.”

The claim, the source said, was akin to battered-spouse syndrome, a psychological condition experienced by people who have suffered prolonged physical or emotional abuse by a partner. The syndrome has been used as a legal defense by women charged with killing their husbands.

In an email to The Times, Wattley wrote in December, “I pointed out that there are some things that haven't fully been investigated (believe it or not). Can't really elaborate at this time.”

Prosecutors are opposed to Krenwinkel’s freedom.

By law, decisions by the Board of Parole Hearings must be approved by the governor, and Gov. Jerry Brown has already rejected the idea of setting another Manson follower free.

In April, a state review board recommended parole for Leslie Van Houten, who had been convicted of murder.

Brown reversed that decision and a Los Angeles County Superior Court judge later upheld the governor’s reversal, saying there was “some evidence” that Van Houten still presented an unreasonable threat.

Susan Atkins, a former topless dancer who became one of Manson’s closest disciples, died in prison in 2009 at age 61.

“What a coward that I found myself to be when I look at the situation,” Krenwinkel said in a 2014 interview with the New York Times. “The thing I try to remember sometimes is that what I am today is not what I was at 19.”

Yeah Dill, I would love to have heard her excuses for being "battered". I'm sure that went over like a lead balloon, considering she hadn't thought of it until now.

Pat was probably optimistic about getting out this time, seeing as her last hearing was delayed because of this new "angle", but now that she's been denied again for the next 5 years, I think she finally accepts the fact that she's never getting out. No more new "angles" to present.

When her death penalty sentence was overturned so many years ago and she had a chance at parole, she probably thought at some point she'd get out. The death penalty would have been kinder to her.

She did it to herself

She did it to herself

I wonder how long it took Pat to finally realize what she did. She complained that she hurt her hand stabbing Abigail because she hit bones. She whined about stabbing Rosemary because she couldn't get a "good stab".

She did so many horrific things to these victims, people she didn't EVEN KNOW! And felt nothing about it.

She laughed during the trial, and even laughed when she was sentenced.

When did she wake up and realize that what she did was wrong? Or did she ever? Is she just trying to get out?

How do you sleep at night hearing the screams?

I would love to hear Pat talk about all that. Or ANY of them for that matter.

How do you even sleep hearing all those screams??? Surely you don't forget that.

She might not remember faces, because it was all a blur because she was fucked up, but she's gotta remember the screams.

And Katie if you believe Tex in his book he claims he wanted to take Sharon back to the ranch to allow her to have her baby but said Patricia hissed "Kill her!" But wo knows what to believe with these people

Yeah Dave, I don't believe any of them! Who knows what was said that night! Except for the lying killers.

Yeah Katie she changes stories all the time andcst this point her bullshit in parole hearings would really annoy me if i was a commisioner, she cant get her facts right on the guesthouse, always changes stories on who had what knives and in my opinion is pulling this mild dementia bullcrap off, in my opinion Pat and Tex are the most dangerous of all the killers and should never be let out

Yeah Katie she changes stories all the time andcst this point her bullshit in parole hearings would really annoy me if i was a commisioner, she cant get her facts right on the guesthouse, always changes stories on who had what knives and in my opinion is pulling this mild dementia bullcrap off, in my opinion Pat and Tex are the most dangerous of all the killers and should never be let out

I for one would LOVE to get my hands on those Tex tapes he made with Bill Boyd, in my opinion LAPD is worried about something on those tapes that may go against the accepted narrative about the killings, possibly something to do with Polanski

I for one would LOVE to get my hands on those Tex tapes he made with Bill Boyd, in my opinion LAPD is worried about something on those tapes that may go against the accepted narrative about the killings, possibly something to do with Polanski