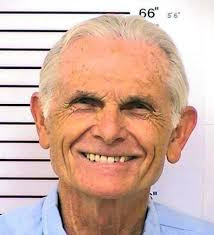 It is the fifth time Davis, 74, was recommended for release by a parole panel, only to see the application rejected by a state governor. The parole panel had approved his latest request for release in February.

Davis was convicted in 1972 of the murders of musician Gary Hinman and stuntman Donald "Shorty" Shea in 1969 and sentenced to life in prison.

He was a follower of failed musician and cult leader Charles Manson, whose followers committed a series of brutal murders in California in the late 1960s.

Davis was not accused of involvement in the notorious murder of pregnant actress Sharon Tate, the wife of director Roman Polanski, and six others by Manson followers in 1969.

In his written decision outlining his reasons for refusing Davis parole, Brown acknowledged that Davis had spent 25 years in prison with no record for misconduct, and made significant efforts to reform his character.

Behind bars Davis has earned a doctoral degree, converted to Christianity, and ministers to other inmates.

"These cult murders have left an indelible mark on the public — the Manson Family is still feared to this day," Brown wrote, reported Associated Press. "Incredibly heinous and cruel offenses like these constitute the 'rare circumstances' in which the crime alone can justify a denial of parole."

Also, Brown added, "his continued minimization of his own violence and his role in the Manson Family further shows that he remains an unreasonable risk to the public."

Brown’s decision came after California authorities on Thursday denied parole—for the fourteenth time—to Manson follower Patricia Krenwinkel, 69. She argued that battered person syndrome affected her state of mind at the time of the killings.

He's only 5'6"? HA HA. He must have felt tough going against Shorty with that "Bayonet"!

Him and Leslie both aged horribly, they were both relatively attractive younger people but now look like things from Tales from the Crypt

Lol Katie and just think Charlie actually has to look up to see Bruce although Charlie told Diane Sawyer he was actually 5'6" in that 1993 interview......yeah maybe standing on a few bricks haha

They've all aged horribly, which is to be expected given their lifestyles. They all look like goblins.

Yep they're a pretty creepy bunch

Seems to be pretty clear that they're never getting out....

I agree Venus, plus Bruce was old enough at 26 to know what he was doing, a question i have that i dont hear raised often is what at this point in their lives do they think is waiting for them on the outside but hardships? It reminds me of the scenes in Shawshank Redemption when Brooks and Red get released after spending 40 or 50 years inside and they cant handle it, if it was 1990 i could see where theyd have a chance but in the 2017 world of internet, smart phones, doing most things online instead of in person, social media, people divided among racial and class lines in spite of all the progressivism and social justice, if i was released id probably be knicking on the prison doors in a week begging them to take me back lol

Dave that's a good point! I was thinking about that movie Shawshank too. If you've been in prison almost all of your adult life, how in the world would you cope on the outside?? Suddenly you'd have to pay rent every month, buy groceries, pay bills, etc. They don't have to do any of that in prison.

a question i have that i dont hear raised often is what at this point in their lives do they think is waiting for them on the outside but hardships?.....if it was 1990 i could see where theyd have a chance but in the 2017 world of internet, smart phones, doing most things online instead of in person, social media, people divided among racial and class lines in spite of all the progressivism and social justice, if i was released id probably be knicking on the prison doors in a week begging them to take me back

Except of course that it isn't you, you haven't spent nearly 50 years in jail and therefore have no idea of the longing that might be felt by someone that has been in for approaching that length of time.
People often talk about how different the world is from when convicts first went in but so what ? People who have never been in jail can have problems adapting to the changing world ! We are a changeable and adaptable species; we are superb at reacting at the drop of a hat. Also, when you think about it, there are older refugees that come from various war torn regions or places where they've been persecuted, into the West and find that they are in a totally different world. They learn to adapt or they stick with essentially the old ways, but either way, for the most part, they cope.

If you've been in prison almost all of your adult life, how in the world would you cope on the outside??

I'd be inclined to let the convict coming out worry about that. They'll find a way. They'll have no choice.

You know man your sanctamonious argumentative bullshit is wearing on me at this point, whatever i have to say you have a fucking 15 thousand word rebuttal filled with redundant terms and shit you just pull out of your ass to sound more knowledgeable and enlightened than everyone else, dont know whether its your inferiority complex over being black or mulatto or quadracoon or whatever you are, every one of your answers turns into a rambling dissertation that veers off subject and has you playing amateur homicide investigator and wannabe true crime writer, ive never seen someone so in love with hearing themselves speak than you are

"quadracoon"?? WTF is wrong with you?

Grim, I enjoy your responses whether I agree with them or not as they always exhibit genuine consideration of the subject. Apparently that's too deep for some. lol

If you don't like Grim's blogging style, that's cool.
We all have people who don't like us, including me.

But hey... state your opinion without the racial insults.
It's poor form.

I've just seen SAG/Dave1971's last post. Shame he's not around anymore, there's much I would have had to say to him !