By Don Thompson The Associated Press 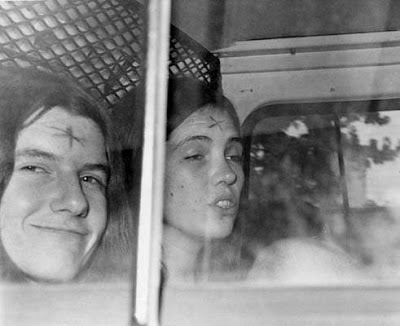 SACRAMENTO, Calif. – A two-member parole panel delayed making a decision Thursday on whether to release an accomplice of cult killer Charles Manson who is the longest-serving female inmate in California.

After a daylong hearing, the panel from the Board of Parole Hearings postponed a decision on whether to recommend freeing Patricia Krenwinkel “because they felt information discussed at the hearing was cause for an investigation,” spokeswoman Vicky Waters said in an email.

The hearing will be continued once the investigation is concluded, she said Sharon Tate’s sister, Debra Tate, said the parole officials told her the hearing was likely to be postponed about six months while they research to see if Krenwinkel meets the criteria for having battered women’s syndrome.


“She totally minimized her actions and blamed everything on other people the whole hearing,” Tate said.

Tate said she didn’t buy the concept that Krenwinkel was a victim because she was free to leave at any time and participated in murders two nights in a row.

“We all have to be accountable for our actions. I don’t buy any of this stuff. She was there because she wanted to be there. Nobody held a gun to her head,” Tate said.

Anthony DiMaria, the nephew of victim Thomas Jay Sebring, said a Los Angeles County prosecutor who attended the hearing told him that the parole officials want to research whether Krenwinkel was a victim of intimate partner batter.


“For this investigation to be initiated at this point is mindboggling,” said DiMaria, who attended the hearing but left before a decision was postponed. “I don’t understand where we go from a murder, the killing of eight people (including Tate’s unborn child) to an intimate partner battery victim. It’s absurd …. It seems like the world is turned upside down. How do you kill eight people and now you’re the victim?”

Jean Guccione, a spokeswoman for the Los Angeles District Attorney’s Office, said prosecutors would not comment until the parole panel makes its recommendation after the investigation.

The decision to delay by the panel came after the 69-year-old Krenwinkel was previously denied parole 13 times, most recently in 2011.


Krenwinkel acknowledged during her trial that she chased down and repeatedly stabbed Abigail Ann Folger, the 26-year-old heiress of a coffee fortune, at Tate’s home and helped kill grocer Leno LaBianca and his wife, Rosemary, the following night.

Wattley successfully petitioned the state to hold the parole hearing a year early at the California Institution for Women, about 40 miles east of Los Angeles, where Krenwinkel is imprisoned.

Krenwinkel contended at her previous parole hearing in 2011 that she is a changed woman. She has a clean disciplinary record, earned a bachelor’s degree behind bars, taught illiterate inmates to read and trained service dogs for disabled people.

Krenwinkel was a 19-year-old secretary when she met Manson at a party. She testified at her previous hearing that she left everything behind three days later to pursue what she believed was a budding romance with him.

She wept and apologized, saying she became a “monster” after she met Manson.

Prosecutors say the slayings were an attempt to ignite a race war after which Manson and his followers would rise from the rubble to rule the world.

Krenwinkel was initially sentenced to death, but the California Supreme Court invalidated the death penalty in 1972.

Gov. Jerry Brown has the power to block the release of inmates if parole is granted. He previously stopped the parole of Manson followers Leslie Van Houten, 67, and Bruce Davis, 74.

She'll never get out. We all know that.

Oh Venus sent me this info. Thanks Venus!

I think it's poetic justice, that when they killed those folks they made comments like "we made them free", "what's the big deal", etc., and now that they've lived their entire adult lives in prison, it's not so funny anymore.

Welp, I guess its great that in 2016, whats left of it, we can still gleefully judge high teenagers of 1969, now that our own testosterone and estrogen levels are depleted by age.

Let me ast you all a question. If you were 19 and saw a way of life that was corrupt and probably evil, would you just let it pass and just find a job and a mediocre marriage and a good television set and say oh well.

Maybe not, but at 19 I would not have been involved in several horrendous murders either....

Ah, but there is the rub: a choice. They chose willingly, yet poorly....

No Shorty, it just proves she's bad with a knife...

In December of 1969, Krenwinkel told Dr Claude Brown that the reason she'd run off to Mobile was that she was afraid of Manson finding her and killing her.
Food for thought.

I wish he had!