Madonna, Jennifer Lawrence, & Anne Hathaway Eyed For Valley Of The Dolls Remake — Get The Deets!

Talk about a team up!

Remakes seem to be everywhere nowadays, and honestly, we're kind of over them. Well, we thought we were until we heard about the possibility of 20th Century Fox remaking the 1967 cult classic Valley of the Dolls.


Sure, you may not be THAT excited yet, but knowing Madonna, Jennifer Lawrence, Anne Hathaway, and Emmy Rossum are all up for starring roles might pique your interest! 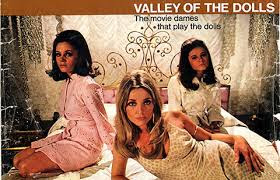 The original film is based on Jacqueline Susann's novel by the same name that featured Barbara Parkins, Patty Duke, and Sharon Tate. The famed novel follows several characters' rise and fall in the movie and theater industry.

While there is no director at the moment, the film is currently being written by Paul Rudnick (The First Wive's Club) and will be a modern-day dark comedy.

Thanks Venus, good work! I actually just saw that movie about 2 years ago on Netflix. I had never seen it before. And I didn't miss anything.

I hope the new director can get more raw emotion from the cast. Patty Duke was funny, but the show wasn't supposed to be funny. Susan Hayward was pathetic, and I'm sure her character was supposed to be.

Sharon did add some sparkle, and I'm not just saying that because I'm prejudiced. I'm not a big fan of Sharon, but I can see she had potential. Unfortunately, Manson, Tex and the squirrels made sure that didn't happen.

You know back when this movie was made, I know they had scenes with raw emotion. Look at The Graduate. Lots of screaming in that movie.

The scenes with Sharon Tate where she found out her husband had a debilitating disease that could be passed to her unborn child, or the scene where she found out she had breast cancer, SING IT OUT TO THE BACK ROW!!! Scream and throw a glass at the wall. Just get mean MAD.

Comparing this movie to the Graduate ?

Well what I meant was that the acting was better in The Graduate.

Goodness, the first one was bad enough, do we really need a remake.

Beauders, LOL! Maybe with some new talent it might be worth watching.

That novel "Valley of the Dolls" was a blockbuster best seller back in the 60's.

My older sister who was an avid reader read "Valley of the dolls." She was into other Jacqueline Susan books too like "The love machine" and one that had a title like "Once is not enough." I tried to read one of them when I was 14 or 15. I can't remember which it was except that the main character was called Robin Stone and he couldn't have children and he kicked his wife or girlfriend in the stomach when he found she was pregnant because he knew it wasn't his and then later {she lost the baby}, under hypnosis, found out he was the child of a prostitute {I think she was German} and he'd seen her doing her thing and later get her throat cut.
The book ends with him telling some woman he needed her. Maybe I'm mixing up more than one book. Either way, I couldn't tell you anything about Susan as an author. I saw a biopic of her a few years back and as I hate biopics, it didn't do a thing for me. I watched it under duress as I wrote a review of "Willy & the poor boys" by Creedence Clearwater Revival.
I did see "Valley of the dolls" back in the early 80s but I was tired, stoned and bored. I watched it because of Sharon Tate which is probably why I wasn't thrilled by it. At that time I was curious to see what she looked like in the flesh, so to speak.

Yeah Grim, I wasn't impressed with the movie Valley of the Dolls, but like I said, I saw it a few years ago. If I had watched it in the 60's, I might have liked it more.

Thanks for the explanation of "Deets". LOL.

I think this movie COULD be a successful remake if it's really played as a dark comedy. Of course, who knows if it'll actually be made? Sounds like this is promising tho.

I'm not a big fan of remakes but I've seen a few that I really did like such as "Freaky Friday" starring Jamie Lee Curtis and Lindsay Lohan. That was much better than the original and I usually end up watching it every time I come across it.

The best part of "VOD" was Sharon. Perhaps the film would've been better if it had a different director.

I saw a film about Jacqueline S. starring Bette Midler and Nathan Lane and loved it. I actually bought the video at a video store that was going out of business.

Hi Venus, yeah I think it was the director, but what do I know about acting?

The scenes with Sharon were just too black and white. For instance, the scene where she's on the phone with her mother and her mother is asking for money while insulting her every day but Sunday, she's just answering like an automaton. I wish she could have just put all the anger into it that a person like that would feel. Contain it, but let the audience feel it.

I really think Sharon could have really been a powerful actress, but I think people were holding her back. I don't get that stuff about Ransohoff "keeping her a secret". I really think that if her career had taken off, she wouldn't have looked twice at Ro-MAN.

I've often wondered what her career might've been like, had she lived. So many unanswered questions....

Captain Albert Sammt was the first officer aboard the Zeppelin "Hindenburg" when it burst into flames and crashed in Lakehurst NJ, on May 6, 1937. He describes his escape:

"Once I'd gotten the last of the flames put out, I opened first one eye, and then the other: I could see! Then I reached for my ears: they were still there too. Fortunately, my hat was still sitting on my head, although the insignia on the front had been torn off at some point during my escape. I had pulled my hat down tightly over my ears, which protected my eyes and ears - otherwise I would have been far more badly burned."

"To make a long story short, I looked around me and saw another crew member standing about fifty feet away. He was wearing a coat, but no hat, and his head and hair were completely burned and he was moaning. I called, "Pruss? (Max Pruss-Captain of "Hindenburg" for that voyage) Is that you?" He groaned, "Yes." Then I said, "Donnerwetter! Look at you!" He answered, "Yeah, you're looking almost as good yourself…" I couldn't see myself, of course, but apparently I was a pretty awful sight too."--They both survived.

Before Hindenburg, Albert Sammt worked in film and created a giant machine for Fritz Lang's film "Metropolis". "He also oversaw the effects for the scene in which the huge machine overheats and explodes, during which he and a number of his fellow Luftschiffbau=(building of airships)comrades cranked out enough steam to fill the entire hangar, and stood up in the rafters out of camera range throwing life-sized dummies down in front of the machine set as actors leapt and stumbled through the steam."

Madonna used a version of "Metropolis" as a backdrop for her video-->Express Yourself.

I don't know how ANYBODY got off The Hindenburg. Why do you think it blew up? A faulty gas line? Sabotage?

I'm not a big fan of remakes

Me neither. In fact I can't stand them. I have seen two though that I did like. I liked "The Wicked Lady" {with Faye Dunaway} and I liked "Invasion of the bodysnatchers." I also love both the originals. It's significant though that in both cases, I saw the remake first, then years later saw the black and white.

I saw a film about Jacqueline S. starring Bette Midler and Nathan Lane and loved it

That's the one I saw. I think Bette Midler is a fantastic actress and not a mean singer either but even she couldn't rescue a biopic !

I've often wondered what her career might've been like, had she lived.

It's probably an awful thing to say but my interest in her only came about because of the Manson case. It's not even because she was murdered. At the time I first read the book when I was 15, I'd not heard of her and she was just a character in the book, initially. My ears perked up a little because of VOD but at that time, I'd neither read the book nor seen the film so she was rather remote. Even in "Helter Skelter" I never got the impression she was a star, as such. It was like she was a bit part actress with pretty stunning looks.

Yeah, it could be!

Hey Grim, I do remember her (vaguely) when she was alive, but your impression is correct. She definitely wasn't a star at the time.

I was in high school when Sharon was killed. I had already been a fan of hers - loved the movie poster from VOD! I was fascinated by her because she had seemed to have a charmed life - incredibly beautiful, engaged to a famous hairstylist, then married to a celebrated European director. I was not allowed to see either VOD or ROSEMARY'S BABY, so that made both Sharon and Roman more fascinating to me! And, poor Sharon, it all came to such a violent end. I remember I couldn't believe it. It was like a nightmare.

I think Jennifer Lawrence would do justice to the role of Jennifer North - Lawrence is a fantastic actress.