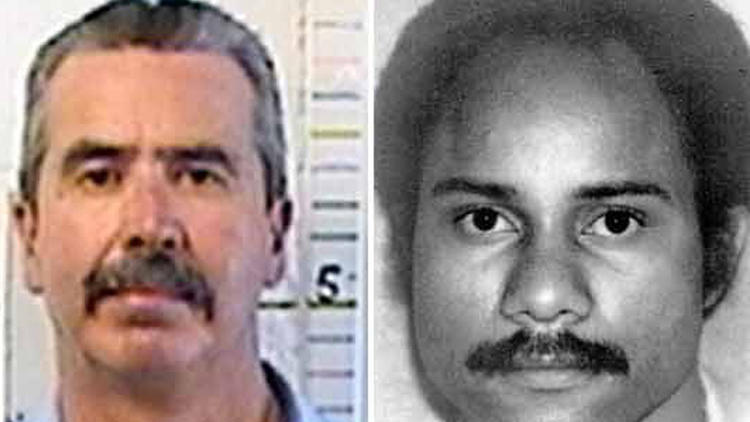 Brown rejected the panel's recommendation that Jesus Cecena, 53, be paroled in the killing of Officer Archie Buggs.

The panel had found that Cecena met the standards of a new law that increases the possibility of parole for prisoners serving long sentences for crimes committed while they were juveniles. Cecena was 17 when he gunned down Buggs. 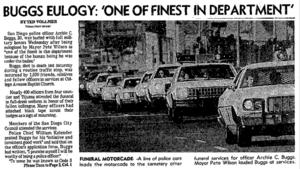 Though Cecena has shown commendable steps toward rehabilitation, he still “poses an unreasonable danger to society if released from prison,” Brown wrote in a four-page decision.

Under the law, Brown had until midnight Friday to make a decision on the matter. If he had opted to neither approve nor overturn the panel’s recommendation, the parole might have gone ahead and Cecena might have been set free.


Instead, Brown announced his decision at 11 p.m. Friday.

“Few people, even hardened gang members, think to avoid being arrested for minor crimes by murdering police officers,” Brown wrote. “And fear of disappointing a parent because of a DUI does not explain gunning down a uniformed police officer during a traffic stop.”

Buggs, 30, an Army veteran who had served in Vietnam, was killed after stopping Cecena’s car on suspicion of speeding at 1 a.m. on Nov. 4, 1978, in San Diego’s Skyline neighborhood. The officer was unmarried, had been a member of the police force for four years and had grown up in the city.

Cecena, who had been drinking beer and smoking marijuana laced with PCP, was four months short of 18 at the time of the incident. Evidence indicated that he fired five times at Buggs, then paused, walked toward the fallen officer and fired a final bullet into his head.

Cecena’s refusal to admit firing that final shot as Buggs lay in the gutter indicates that he has not truly taken responsibility for his crime, Brown wrote.

In San Diego, the governor’s decision was praised by law enforcement officials and rank-and-file officers.
“Criminals who commit such crimes should never be paroled,” said Police Chief Shelley Zimmerman. “Our police officers put their lives on the line every single day to protect the great citizens they serve. This decision sends a very strong message that will make our communities safer and our officers safer.”

Dist. Atty. Bonnie Dumanis called the decision “important to all in San Diego” and labeled the killing a “cold-blooded execution.”

Dumanis, Zimmerman, the Police Officers Assn. and numerous officers, including some who served with Buggs, had written to Brown pleading with him to reject the parole recommendation.

Bill Farrar, who was one of the first officers on the scene when Buggs was killed and later that night helped arrest Cecena, said Brown “has done exactly the right thing.”

The new law, which became effective Jan. 1, says the parole board must give “great weight to the diminished culpability of juveniles” and also consider the prisoner’s “maturity and rehabilitation in prison.”

At a hearing in April, Cecena, an inmate at Valley State Prison in Chowchilla, expressed regret for the killing and pledged to “honor Officer Buggs in a positive way” by leading a law-abiding life if released. But he stopped short of admitting that he fired a final bullet into Buggs' head.

His prison record indicated that he has disavowed association with prison gangs, helped mentor younger prisoners and participated in Alcoholics Anonymous and Criminals and Gang Members Anonymous.
He has had several offers of jobs and places to live, including with his brother, who owns a concrete-and-rocks business in San Diego County.

As the governor's decision was pending, Cecena's attorney, Tracy Lum, said, “Nobody denies this crime was horrible, but the law is the law.”

Cecena's co-defendant, Jose Arteaga, was 20 when Buggs was killed. Evidence indicated that he handed Cecena the gun after the traffic stop. He was also sentenced to life in prison and may eventually be eligible for parole.

Cecena has had multiple parole hearings during his decades behind bars and will be eligible for additional hearings in the future. As Brown noted, he has given differing explanations of the killing, including at one hearing insisting that he fired only in self-defense.

In his rejection of the parole recommendation, Brown quoted the judge who sentenced Cecena in 1979 as saying that Cecena’s actions “showed a cool, calculated judgment, a deliberate killing.”

Cecena was arrested just hours after the killing at the home of his girlfriend’s mother, where he had gone to wash Buggs’ blood off his hands and clothing. The blood had splattered on him when he fired the final shot, trial evidence indicated.

What this guy did was bad enough, but not nearly as bad as the Manson killers.

They are not political prisoners. They are in prison, where they belong, for the rest of their lives, until Big Daddy Heaven comes down and judges them.

I agree. Thanks, Katie.

A quick Google search of "murderers paroled in the state of California" turned up an AP article entitled "California 'lifers' leaving prison at record pace" It says in part:

"SAN FRANCISCO (AP) — Nearly 1,400 lifers in California's prisons have been released over the past three years in a sharp turnaround in a state where murderers and others sentenced to life with the possibility of parole almost never got out.

"Since taking office three years ago, Gov. Jerry Brown has affirmed 82 percent of parole board decisions, resulting in a record number of inmates with life sentences going free."

Apparently, Jerry Brown has approved the release of at least 1,400 "lifers", but not Bruce McGregor Davis. As far as I'm concerned that's a violation of the "equal protection clause" of the 14th amendment of the US Constitution. "The clause, which took effect in 1868, provides that no state shall deny to any person within its jurisdiction "the equal protection of the laws".

It is also a violation of the concept of "separation of powers". "This philosophy heavily influenced the writing of the United States Constitution, according to which the Legislative, Executive, and Judicial branches of the United States government are kept distinct in order to prevent abuse of power." Jerry Brown (a politician) in the executive branch, is making an unequal decision regarding California prison inmates that should be made by the judicial branch, these decisions are in fact made by the judicial branch in most states.

Bruce McGregor Davis turned himself in, there is video of it on YouTube. He's been in prison for 41 years and the parole board has approved him for release twice determining he is not currently a threat to society. His release has been blocked twice by a politician. As far as I'm concerned, that's the absolute definition of "political prisoner".

Sunset, Bruce turned himself in because Charlie told him too. He was still Charlie's hand puppet.

I think the words "gravity of the crimes" has a lot to do with why they're all still in prison. Nothing political about it.

When the death penalty was overturned, they should have looked at these cases individually to decide if they could even get parole but they didn't. If they're trying to do that now, good for them.

If Tex's victims had not of been rich people, he would probably be out today. But one could argue he's still in there because he was apart of The Manson Family.

This guy is still in there because he killed a cop...even Capone didn't agree with that ... nor Luciano.

But cops as hired hit men...that's a different story.

Katie, thanks for this subject. I agree with you, and have a hard time referring to these people with absolute certainty as "political prisoners." I guess it depends on our idea of what a political prisoner actually is... I don't feel a governor's decision whether or not a murderer is fit for parole makes the murderer a political prisoner, because I think of individuals being kidnapped, imprisoned and suffering through unspeakable acts of torture and then killed for their political or religious beliefs as political prisoners.

And I don't agree that California's governor won't release these people out of fear he won't ever be elected to public office again if he does because I don't think these people are that important anymore. Politicians are elected and re-elected all the time for far worse...but again, that's just my opinion. :)

I don't think they would let anyone out that killed seven people, rich or poor. Tex actually helped murder Shorty Shea too, but never was charged with it. Abigail Folger was well off, but Sharon Tate was not rich, neither were the LaBiancas. Rich or poor has absolutely nothing to do with it. Also, I don't buy into that political prisoner bologne. They murdered extremely viciously, and then paraded in front of the cameras laughing about it. I don't understand why people want them released so bad. They caused so much pain. They ruined so many people's lives. Why should they get out?

Austin Ann, I agree with you...again!
Tex wouldn't be out now under any circumstances...

He put on his insane act but was judged sane when he shot, stabbed, and butchered seven people, and an unborn near full term baby...he'll never get out and never would have...regardless

Marliese, I agree as usual. When I think of a "political prisoner" I think of a POW being held in unspeakable conditions and horrifying executions. Much like the recent beheadings of journalists. Not to mention the POW's of every war of the 20th Century.

Austin Ann,that's one of the basic reasons I think these people are all nuts. They laughed about murder like they were at a slumber party. It's chilling how far detached they were from humanity. And for anyone to believe that they re-attached their brains to reality is a huge jump.

For example, if Jodi Arias got the death penalty, and then Arizona reversed it and she was suddently up for parole, knowing that she has nothing to do with Manson, but that she shot and stabbed her ex-boyfriend and tried to cut his head off because she was jealous, should she ever get out again?

The answer is no. There are vicious killers who should never see the light of day again. They are missing a part of their brain that makes them human.

Also, Marliese is right. Gov. Brown doesn't have to worry about Bruce Davis to get re-elected. He's probably the last thing on his plate regarding that.

I'll bet if you did a survey in California to see who knows who Bruce Davis is, 95% of the people would say "I don't know....who?"

I pretty much agree, though I do believe that in Bruce's case the myth behind the killings he was involved with has played against him. We saw this when Brown recited bunk information in his formal denial. I think Bruce is a victim of guilty by association.

Bobby had his shot, but his cockiness and bad choices pretty much ended his bid. If he gets a 5-15 year denial next appearance he will probably die in prison.

If you live in California and want to end your marriage or domestic partnership, hire a competent San Diego divorce lawyer to represent you in court. To find and experienced lawyer, ask lots of questions.
san diego divorce lawyer