Thought I would share this old news article from several years ago...Death Valley/Panamint Valley must be an attractive place for them.... 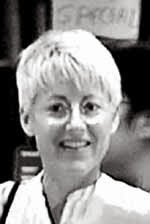 This rare image of Patricia Partin, also known as Nury Alexander, was taken from a video filmed by Gaby Geuter, who secretly filmed guru Carlos Castaneda and entitled it “Filming Castaneda; the Hunt for Magic and Reason.”  Remains found in Death Valley proved to be those of Partin/Alexander, one of Castaneda’s disciples.

Funny, in researching Castaneda, a few similarities to Manson popped out at me...mainly his description by people that knew him:

"Most who knew him then recall a brilliant, hilarious storyteller with mesmerizing brown eyes.  He was short (some say 5-foot- 2; others 5-foot-5).

He severed ties to his past; banishing his ex-wife and son.  His seclusion also helped Castaneda conceal the alternative family he was forming.


Castaneda was a "control freak," followers were often freed from the anxiety of decision-making.  It was also reported that Castaneda directed the inner circle's sex lives in great detail.

At the heart of Castaneda's movement was a group of intensely devoted women, all of whom were or had been his lovers."

Yeah Kimchi, a lot of strange people in my area...Me included!