Book Report - "The Girl": A life in the Shadow of Roman Polanski by Samantha Geimer 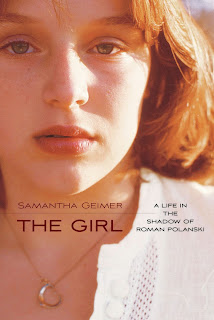 Grump Writes:
A pretty good book and an easy read.  If anyone is expecting any juicy writing about the “sex act” (rape) it does not go into detail.   There is hardly any mention of Sharon or her murder.  It’s your basic biography, I lived here, I married him, divorced him, married him, found out my divorce was not legal so my marriage was not legal.  Was that a run on sentence??
Roman pled to “an unlawful sex act,” the lowest charge.  Samantha and her family were in total support of this.  They just wanted it to go way.
In short, the entire Roman fleeing to Europe was because of a corrupt Judge.  At one time, while the DA, Roman’s and Samantha’s lawyers were in the judge’s chambers, the judge was on the phone with reporter Bill Farr asking his opinion. Remember that name from the Manson trials?  It was all about publicity and politics.  Roman was sentenced to a 90 day mental evaluation at Chino, he completed it in 45 days.  The judge wanted him put back for an undetermined amount of time until he figures out what to do.  In legal terms, he could been held up to 50 years. He completed his sentence, none of the layers or DA (or Samantha) felt he needed to go back to prison.  So Roman fled.
Samantha never forgave Roman, and her mother did not pimp her out as some have written.  Samantha did file a sexual assault civil lawsuit against Roman later in life. It seemed the statue of limitations stopped the moment Roman fled. She got a 6 figure settlement,   During Romans’ deposition, in Paris, Roman said to Samantha’s lawyer, “If you had seen her naked, she was so beautiful, you would have fucked her too.”
Samantha  writes about her mother being an actress at one time.  She is described as once being a type of sex symbol in the DC area. Here she is in her commercials for Ourisman Chevrolet.


"You get your way at Ourisman Chevrolet!"
We have a commercial here for Courtesy Kia where the girl gives me those funny feelings too!
Wait until the price goes down some, and then grab a copy.
Posted by LynyrdSkynyrdBand at 5:46 PM
Labels: The Girl - A life in the Shadow of Roman Polanski by Samantha Geimer... Book Review

I just noticed the Ourisman Chevrolet commercial added to this post. I have no idea what the connection is, but I seen that commercial a million times when I was a kid.

sunset77 said...
I just noticed the Ourisman Chevrolet commercial added to this post. I have no idea what the connection is, but I seen that commercial a million times when I was a kid.

The girl in the commercial is Samantha's mother!

OK, thanx for that Grump. That "You always get your way, at Ourisman Chevrolet" song was on TV constantly when I was a kid. I worked in DC as a roofer for a while, I may have seen Ourisman Chevrolet, I think it's in Marlow Heights MD. I had no idea that was Samantha Geimer's mother, until today.

Her mother was pretty. That commercial was in 1971? Just a few years before Roman's dirty deed...

I did a bit of looking into this. If I remember correctly, there were a series of the Ourisman commercials, they came out with a new one just about every week. Apparently, Susan Gailey sang the jingle that is still kinda stuck in my head, "You'll always get your way, at Ourisman Chevrolet, we got service, selection, and credit while you wait, something, something, something, blah, blah, blah.

I found a bit of info on it HERE.

Also, there is what I think is a fairly recent documentary about Gailey, Geimer, and Polanski called "Roman Polanski Odd Man Out". I can't find a complete free version of it in English, they want $4 to watch it on YouTube. The trailer is HERE.

Hopefully, this will be my last comment about Ourisman Chevrolet and their damn commercials. I ran across this post on another board:

"I can still recite from memory the jingle from the great Ourisman Chevrolet commercials that ran in the Washington, DC area 30 years ago:

Wish I could link to a movie of it so that you too can still have that tune stuck in your head for the rest of your life."

This was belted out by a very pretty model that I now assume was Susan Gailey. I've tried mightily to find video of her singing it, but I think they have been removed for copyright.

Even after all those years, I still remember the Shop-Rie "can-can" sale commercials.