Is a new Bobby Beausoleil documentary in the works?

According to the new book "Manson - The Life and Times of Charles Manson" by Jeff Guinn, there is... 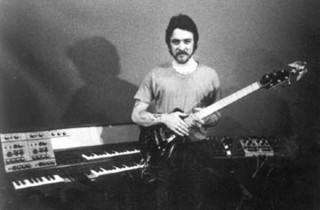 From "Manson The Life and Times of Charles Manson"

"I had hoped to interview Beausoleil, but learned that he had agreed with film maker Steven Martin to decline all interviews while they cooperated on a documentary about his life."

"Steven M. Martin grew up in Los Angeles.  His Theremin: An Electronic Odyssey won the Documentary Filmaker's Trophy at the 1994 Sundance Film Festival.  He is currently working on a film about Bobby Beausoleil."

A documentary about the inventor of the first electronic synthesiser instrument and his subsequent life after he was abducted by the KGB as well as a history of his instrument.

There's at least one guy on the internet that claims it was not a Theremin used on the Beach Boys song "Good Vibrations", I ran across it about 1 year ago. Link HERE.

Kind of off topic, but Bobby related, Last year I sent out about 40 Christmas cards to famous muderers in prison. I got replies from

Tex - Religous response. He did mention his son in the Marines. I told him I was retired Air Force, he liked that!

Pamela Smart (I still think she's hot). 4 page letter. She is being treated bad in my opinion. She is a school teacher, yet they won't let her teach the uneducated women. She wants to, but they makle her sit in her cell. Doesn't make sense. She also got put in the hole when they found a plastic "spork" in her cell.

Thanks Saint, I just spewed my brew all over my keyboard...I love that movie...hey, it's Saturday, I'm relaxing...

Sunset, I know nothing about that "Theremin" stuff... I just went by what Imdb said...glad you researched it indepth...

Grump - I've never had the nerve to write any inmates...and I know it's the best way to understand where their head is at..I just can't do it...can you share what Bobby said?

I was kind of nerdy, and got my Do's picture on my XMAS Card. He basically thanked me for reaching out to him and supporting his parole. He said it has been a long haul made worse with the passing of my wife. He thaked me for my 23 years of Military service and suggested I take a vacation with my "Pal" (dog)!

"He thaked me for my 23 years of Military service and suggested I take a vacation with my "Pal" (dog)!"

"I was kind of nerdy, and got my Do's picture on my XMAS Card"

Hey, Bobby loves dogs! I think that's a cool idea, not nerdy...I bet it's been a long time since he's been around any pets... man, the stuff we take for granted...I doubt many inmates (except Pat)get to bond with an animal... if they do, they have to let go... unlike us in the free world..I can't imagine giving up my pets...it's hard enough to let them go when they leave us for "a better place"...

I think a Theremin is an instrument invented by a Russian guy named Theremin, it's played by moving your hands over metal loops without touching them. I thought the sound on the Beach Boys song "Good Vibrations" was a Theremin also until I seen a vid of the Beach Boys doing that song. At around the 30 second mark of a vid, a Beach Boy is playing what I assume is the instrument that sounds like a Theremin, vid HERE.

IMDB lists Bobby Beausoliel as playing the role of "Saddle-tramp Bandit" in the film "The Ramrodder". Saddle tramp bandit doesn't look anything like Bobby Beausoliel, so I sent an e-mail to Bobby a couple of years ago before his wife died, he replied and said he played the role of "Mogu" in that film. I've come to find out that IMDB isn't always correct.

When I was in prison myself, while we didn't have "pets", there were often animals outside the windows of the cells on the first floor. Various raccoons, opossums, skunks, cats, etc. would show up under the windows waiting for left over food to be dropped out to them at night. Cans, trash and other things were dropped out the windows, giving them a smorgasbord.

Pamela Smart (I still think she's hot). 4 page letter. She is being treated bad in my opinion. She is a school teacher, yet they won't let her teach the uneducated women. She wants to, but they makle her sit in her cell. Doesn't make sense. She also got put in the hole when they found a plastic "spork" in her cell(end quote0

Hell yea she's hot. She never killed anybody either. She got life without parole. She should have plead out. She had a crappy attorney. She would have got less time if Kanarek had represented her.

Pam Smart's problem is that she has never admitted the truth. Her teenage lover said she would rather die than admit the truth. Well she will.
For some reason she is not well liked in prison. Strange woman she is. She has a child's voice.
Pam's mother tried to help her but the mother is an emotionless monotone.

The Theremin was used by Jimmy Page in the movie "The Song Remains The Same". I can't remember the name song where it was used.

Pam Smart? Hell, I could see myself as a teenager falling for her. I wouldn't have killed for her but being a red blooded American teenager that was pretty good at lying to girls back then I probably would have told her I would just to get her in the sack. After I grew up I realized that lying to women is disrespectful and not necessary and I have since changed my ways..... Do you believe that?

The theremin was used by Jerry Lewis in one of his movies in the early 60s or late 50s which is probably where Beausoleil saw it.


This is a good book about this kid who wrote to many Serial Killers including Manson.
The last chapter is great...He gets a little too up close and personal with John Gacy.
The guy who wrote the book,Jason Moss was on the Howard Stern show back in the late 90s which is how i heard about the book.
Jason Moss killed himself Kurt Cobain style in 2006.

This is a good book about this kid who wrote to many Serial Killers including Manson.
The last chapter is great...He gets a little too up close and personal with John Gacy.
The guy who wrote the book,Jason Moss was on the Howard Stern show back in the late 90s which is how i heard about the book.
------------------------------------
I saw an interview with this guy on TV back sometime in the 90s. If my memory serves me I recall him saying that Gacy attempted to strangle him during a visit. I didn't believe him. I don't know of any state that has contact visits for death row prisoners.
The book sounds interesting. I think I may check out my local library see if they have it.

Matt - I just sent Christmas cards, I'm not about to kill myself! I did correspond with Charlie about 15 years ago. He sent me a letter and about 6 post cards. He never did answer my questions though.

He did send me a post card with the following on it:

"I always do what I can when I can
I'm not always aware enough to know
What I can and When I can
But I'm a can-can kind of a Dancer!"

I just ran across a Manson documentary for the History channel I don't think I've seen in it's entirety. I would guess most people on this blog have already seen it, if you haven't and are interested, it's HERE. It's from 2009.

Also, there are MANY great movies on that website, including an entire Rolling Stones show filmed in IMAX.