If you recall... Sharon Tate had a yorkie named Sapirstein, that Frykowski accidently ran over and killed.  It's a really strange name for a dog.

Word has it, Sharon named the dog after a character in the movie "Rosemary's Baby" (i.e., "Doctor Sapirstein" played by Ralph Bellamy).  The screenplay for the movie, was written by Roman Polanski..

Come to find out... Joel Rostau had a crime partner named Harvey Sapperstein.   Is it possible that Roman got the name "Sapperstein" (for his movie charcter) after meeting Rostau's crime partner? 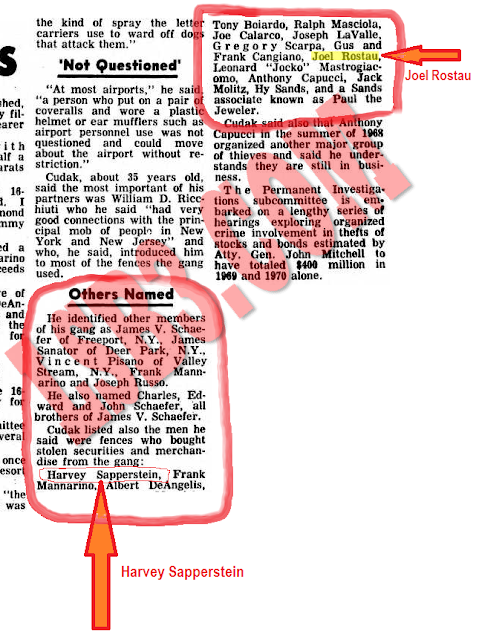 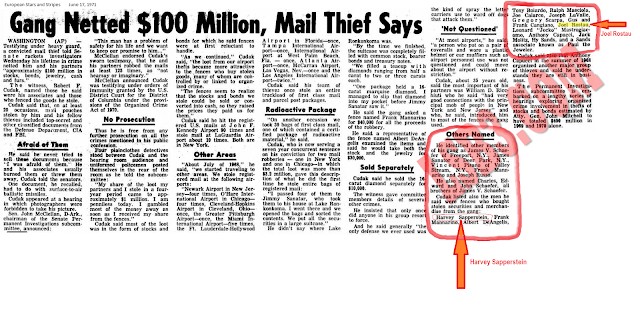 Interesting find...
Many Thanks to the Anonymous person who donated it.

I thought Joel was a drug dealer. This says he was a fence for stolen goods. He was a busy guy. LOL.

yes, I knew it all along - a squished pooch is the key to solving TLB.
just kidding, but this is fun and interesting stuff. What I'd give for a group photo of the theft gang.
Now if it turns out Harvey Sappiarstien was a scientologist then we got it.

I think it was Harvey Sapperstein...with the pipe wrench....in the study.

I wonder why a nice, good looking woman who worked as a receptionist for a popular hair stylist would be interested in dating a thug.

Leary said:
"Now if it turns out Harvey Sappiarstien was a scientologist then we got it".

Katie said:
"I thought Joel was a drug dealer. This says he was a fence for stolen goods. He was a busy guy. LOL"

I'm finding-out, that he was a LOT of things, to a LOT of people. LOL

Roman adapted it from Ira Levin's book. Roman's adaptation follows the book almost exactly.
Roman did not think the name up.

It seems Revatron is correct.
Levin used the character "Sapirstein" in his novel, before Polanski made the movie adaptation.

Oddly enough, one of the main character's in Levin's book is named "Roman". LOL

I've never read the book, or seen the movie.

That is blasphemous, Lynard! One of the best horror movies of all time, and besides being a horror movie it is just really good.
Ira Levin also wrote The Stepford Wives which I haven't read or seen, but sounds like a creepy story.

I've seen Rosemary's Baby, it was posted on YouTube, but now they want $3 to watch it. I could prolly find it on a free movie site.

I just looked on YouTube, 3 vids I thought might be interesting "Look What's Happened to Rosemary's Baby", "The Making of Rosemary's Baby", and "Clive James Interviews Roman Polanski". I haven't seen any of them and I don't have time to watch them now.

Rosemary's Baby was a decent movie I thought, purportedly, Sharon Tate appears in it at some point, I've looked several times, I haven't seen her.

If I had to guess, I'd guess "Sapperstein" came from the novel.

Sharon is in the movie...

she play one of the friends at the party she goes to after not seeing any of her friends for a spell. She has one close friend who convinces her to get away from the apartment and see some of her old peeps...

Another perplexing question. It is supposedly Anton Lavey playing the Devil in the scene where Mia(Rosemary) gets impregnated... I have read in places that he was the "Devil" and I have read he was a consultant on the film, and I have also read he is neither...

Here is what a search gave me lol:

From www.imdb.com, trivia section: "There is a popular rumor that Church
of Satan founder Anton LaVey gave technical advice and portrayed Satan in
the impregnation scene. This is false - LaVey had no involvement with the
film." (http://www.imdb.com/title/tt0063522/trivia)

Other (less credible) websites indicate just the opposite. For
instance: "To keep the rituals and chants as realistic as possible,
director Roman Polanski had Anton LaVey, founder of the Church of Satan
and composer of 'The Satanic Bibles,' serve as an assistant in the ritual
scenes. In return for his help, LaVey was allowed to play Satan in the
'impregnating sequence.'" (http://home.att.net/~r.s.swartz/rose.html)
This appears to be the old version of the imdb's RB trivia, upon close inspection....


It is a pretty good movie- I cant stand Roman, and think personally he is overrated as a Director. But this was a good picture...

Sunset said:
"If I had to guess, I'd guess "Sapperstein" came from the novel".

This hypothesis, is a completely dead issue.
It was fun for a couple hours though... LOL

This is what I get, for posting stuff on my way out the door, without doing a quick back-check of facts.
Oh well... it happens to everyone sometimes.
I wish I was retired, with the luxury of researching every thread topic for 12 hours, before posting.
Unfortunately... that's not the case.

I'll probably be moving this thread down (under the others), as the main point of this post, is moot.

For the record:
I may read Levin's novel at some point.
As for the movie, I'll take a pass.
I boycott all Polanski movies, because he's a pedophile and fugitive from justice.
I'm sure my $3 won't put Polanski out of business... but, it's the principle.

Perhaps we've been thinking about this wrong, and the answer has always been there for us to see. Voytek actually drove over and crushed to death not Sharon's pooch but Harvey Saperstein. The boys in New York were decidedly not amused and decided to take action...

There you have it. Now if only LaBianca could be this easy....

If you only watch/listen to art created by "upstanding citizens" you will be left with shit, excuse my language. Roman is an incredible director and to deny yourself "Chinatown" or "Rosemary's Baby" is cruel and unusual punishment.

To say that Polanski is not an "upstanding citizen", is quite an understatement.
The man is a pedophile, rapist and fugitive from justice... not a pot-smoker caught loitering.

Saint, I've seen Rosemary's Baby about a dozen times and I've never been able to spot Sharon at the party scene.

That's not Sharon Tate in the party scene have it on DVD just checked to make sure. Found it in the $5 bin at Walmart