Some Lynyrd Skynyrd Trivia for Y'all.
The Origin of the song "Gimme Three Steps"


"I was cuttin' a rug, down at a place called Jug,
with a girl named Linda-Lou".

The is the Real "Jug" 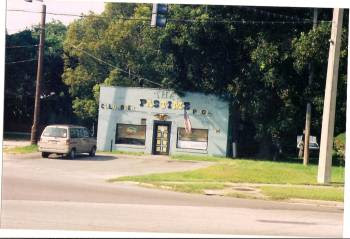 This tiny bar was actually named the "West Tavern"... known by locals as simply, "The WT".  It was later changed to "Pastines" (as seen here).
This closet-sized bar, is where Ronnie Van Zant almost got shot, by a jealous boyfriend.  This real-life incident inspired Skynyrd's hit song "Gimme 3 Steps".

So where did the name "Jug" come from, you ask?
The "Little Brown Jug" was another tiny bar (later converted to a liquor store) in the same area.  The name "Jug" was used for the song, simply because it rhymed with "Rug".
Interestingly enough... the girl's real name was Linda, but "Lou" was added (i.e., Linda Lou) for the same reason... it rhymed with "who".
The man actually pulled a .38 Special on Ronnie, which became a ".44" because it rhymed with "door".
This was the original "Little Brown Jug" in Jacksonville, Florida.
The building as you see it here, no longer exists.
It has been purchased and converted to office space. 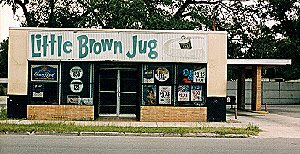 Gary Rossington tells the real story:
We went in this W. T. West Tavern one day — me, Ronnie and Allen. Me, I never danced in my whole life. We always played so people could dance. I never been able to. But anyway, this girl came over and wanted Ronnie to dance.

So they went out and started twisting and doing the Monkey. This guy came in and said, “Hey, that’s my girl. You better get. What are you doing dancin’ with her?” And Ronnie went, “Hey, I’m just having fun.”

The only reason the girl was dancing with Ronnie was because she was fighting with her boyfriend. Then the guy pulled a gun and said he was gonna blow Ronnie’s brains, you know? And Ronnie said, “Just let me leave. I don’t know the girl. I don’t want to see her again.” And he turned around and said, “If you’re gonna shoot me, you’re gonna have to shoot me in the ass or the elbows.” And we started walking out, er, Allen and me saw Ronnie walking, so we started to walk. We got to the car, and we wrote the song in the car driving back to the house.


"Bring all my mules out here... and kick'em!"
Posted by LynyrdSkynyrdBand at 9:37 PM
Labels: Gimme Three Steps, Lynyrd Skynyrd

Thank you for this Lynyrd!!!
Great post, perfect timing!!!
Cool info
Hope you are well my friend!!!
Hope everyone else has a good night
PEACE

That guy in the blue shirt is soooo CUTE!

Looks like an old boyfriend of mine back in the 70's.

Thanks Lynyrd! Thanks Josh!

Have a nice evening everyone! :)

When in walked a man
With a gun in his hand
And he was looking for you know who.

He said, "Hey there fellow,
With the hair colored yellow,
Watcha tryin' to prove?

'Cause he was lean and mean, and, Big and bad Lord,
Pointin' that gun at me.

I said, "Wait a minute, mister,
I didn't even kiss her.
Don't want no trouble with you.

And I'm tellin' you son,
Well, it ain't no fun
Staring straight down a forty-four.

Well he turned and screamed at Linda Lou
And that's the break I was looking for.

And you could hear me screaming a mile away
As I was headed out towards the door.

I was always an Allman Brothers guy. But in hindsight I wonder why I never sidestepped to LSB or other southern rock/blues. I think I got distracted by reggae or something. NO, now I remember, I was in Austin by then so I got caught up in the Austin music scene, Delbert McClinton, Marcia Ball and others but primarily Stevie Ray.
Man oh man, those were the days and Austin was the place to be. Unbelievable weather, music, food and women. One wild scene.

I worked on ACL for three and a half years Katie. SOme of the best times of my life.

I hope all of you visited over at Tom Gulley's site as he has a hour plus interview with the road manager of Lynyrd Skynrd.
As always, Tom does a great interview.

Hello L,S I'm new to your page actually found you on Eviilz site been a regular there for past 6 months or so I really enjoy your site very informative and positive not like
Cold. Scott the mental defect
Also great pic Archie Bunker classic bro
Peace from Jersey shore

OK fellow know-it-alls, take the test and find out how stupid you are. I got 7 correct. If you do take the test please tell us your score AND DONT FIB!

Okay Mr. P, I started the quiz but the 3rd question doesn't have a right answer.

The question is: what was scrawled in blood on the LaBianca walls.

None of those are right. I'll choose "Healther Skelter" and continue.

Okay I got 10 out of 10 right, although question #7 was bogus too. It said that Squeaky was the only one who carved an "X".

Katie the explanation claims Squeaky carved the X on the courthouse steps. I had never heard she etched the X in public.

Hello William!
Welcome to the blog!
Feel free to join-in on any discussions.

Thanks for the welcome L,S,B
SIMPLE MAN IS MY ALL TIME FAVORITE SONG OF ANY GROUP

I just tried accessing the "Manson Myth" PDF book... and, I didn't have much luck either.
In fact... I couldn't get one page to open.

MattP is our techie... maybe he'll read this, and look into it.

Thanks for the heads-up.

Please check your email.
Thanks.

I had to re-read your post, you said Squeaky etched an X in publid, I thought I read pubic, and figured X really did mark the spot...

Thanks for your input Dilligaf!
LOL!

Hey Mr. Dilligaf....wasn't me commenting on Lynn's X.
But that would be an interesting investigation/story in and of itself - how the X's have effected the lives of those who marked themselves as such. I picture Mary going on a Match.com date and the guy sitting across from her noticing the X and his mind starts whirling. Does he ask her? Something seems familiar. Then dessert comes and he suddenly remembers - Manson!!! I'm oughta here.
X marks the demented.

That was me talking about Squeaky etching an X. Sounds like a game from Mattel.
ETCH AN X
Yes you too can look like a Manson girl! The kit includes a rusty nail to carve your own unique X
Shears for head shaving
A hypodermic with penicillan
One Buck knife
One black creepy crawly swaetshirt
One 'get out of jail free' card
One radon semiauto pistol