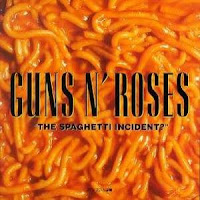 Fast facts: "The Spaghetti Incident?"-  released November 23, 1993, is the fifth studio album by the American rock band Guns N' Roses. The album is unique for the band, consisting entirely of cover versions, mostly of punk and glam rock songs of the late 1970s and early 1980s.
Despite protests from Rose's bandmates, an unadvertised cover of Charles Manson's song "Look at Your Game, Girl" was included on the album at Rose's request. The CD release gave no track number to the song—it could only be found by listening through the dead air left after the last documented track on the album, on track 12. In early 2000, Rose said that he would remove "Look at Your Game, Girl" from re-issues of the album, citing that critics and popular media misinterpreted his interest in Manson and that a misunderstanding public no longer deserved to hear it. However, the song is still present on the album, and in recent re-issues, "Look at Your Game, Girl" has been added as a separate, 13th track.
Posted by LynyrdSkynyrdBand at 10:57 AM
Labels: Manson Music

I prefer Charlie's version.
It's more soulful... and besides, CM does it solo, without the benefit of a guitarist, and percussionist.

I also have to give CM the nod, seeing that he's the original composer.
Generally speaking, I prefer originals to covers anyway... unless the band covering gets really creative... and goes in a totally different direction with it... "making it their own", sorta speak.

I'm dying to know how many copies this G-N-R album actually sold, to determine what Bartek Frykowski ultimately got out of it financially.
A quick search for those numbers turned-up nothing.
Maybe I'll put a bit more effort into that later.
If anyone wants to lend a hand, and figure-out how many units that album sold... it would be a helpful, and appreciated.

Eh... but then again... the Guns-N-Roses version is pretty damn good. LOL

Either way, I've always liked this song.
I believe Manson was a force to be reckoned with as a songwriter, back in the mid-late 60's.
His technical prowess wasn't the greatest, as far as performance (he was kinda sloppy on the guitar, just chopping away) but, Manson must have been a warehouse of song ideas.
He thinks in a million different directions at once... which is great for brainstorming song ideas... politics, love, hate, drugs, sex, youth... he hits all the big song topics! LOL

A great musician could have likely made him rich, or stole him blind, using all his song ideas.

I have to say I like Charlie's version better too. It does seem more soulful and sincere (Never thought I'd ever say anything nice about Charlie. HA HA)

Isn't Bartek dead? I wonder why none of the other victims' families didn't sue Charlie or the others?

Dunno if Bartek is dead or not. I also suspect that if he is alive he still may not receive a dime. It looks like he won the suit but only as far as a judgement is concerned. I myself prefer a check in my hand to a winning judgement on paper

Yeah... I gave it another listen, and I definitely prefer Manson's version.
It's much more heartfelt, and genuine.

I gotta wonder what Manson thought of this in 1993, when it was first released.
They say imitation is the highest form of flattery.
I wonder if Manson felt flattered and appreciative... or bitter, betrayed and robbed as usual. LOL

I was reading that originally, the royalties were actually set to go to Manson directly... the author stated... "that's a lotta cokes and smokes". LOL
But then, Bartek's lawyer quickly stepped-in and said... "look, we haven't been paid a penny yet" (paraphrasing).
And so... the royalties were diverted to Bartek, for the previous, and still pending, lawsuit decision.

Jeepers... Voytek... Bartek... these people need to expand their name-base a little bit.
I wonder if he has a brother named George-tek, or something! LOLOL

Did I use the word "sincere" to describe Charlie????

i've always caught the stench of exploitation in the guns and roses version, like the only reason it was on the album was to get some easy publicity.
same reason he used to wear the charlie don't surf t shirt.i'd bet that axl rose knows nothing about the case or manson other "this will make me look like a rebel and piss off peoples parents"
the lemonheads do a cool version of 'your home is where you're happy'
i don't think that gnr lp sold all that much compared to the 1st 2 lps

I didn't get into numbers specifically... but I did get the impression, that this was indeed, their least successful album, in terms of sales... ei, units sold... just with a quick look.
That seems to be the case.
It certainly didn't sell more than "Appetite for Destruction".

I have no idea how sincere AXL is... how much of a publicity stunt this all was... or, what his knowledge of Charlie, or the actual case is.
You could indeed be, absolutely correct with all your assertion(s).

At the very end of the song... AXL says "thanks Charles", or something like that... but they muted most of it on the album.
You'd have to wait for it, and crank the volume to hear exactly what he's saying.

I'm not a huge GNR follower... but, it seems in recent years, AXL has fallen completely 'out of grace" with fans, after pulling several tanrums, and stunts on-stage... and off, for all I know.
It's like he's become a parody of himself.

I think that is the closest to talent I have ever heard coming from Charlie...

theres a different version of this song by manson i've heard.
i think its from the 1967 demo tape.
a little lighter and faster than the one from the lie lp.

I agree- I like Charlie's version better...I get a visual....like the guy in the movie Animal House at the toga party...as he sits on the stairs amdist a group of pretty girls and sings/strums "I gave my love a cherry.....:

But I love Axl's version of Live and Let Die and Axl on stage way back when was fun to watch. It's sad as to what has happened to him....like the fact that he has Tommy Stinson on bass in the new GNR....Tommy rocks!

Otis Day and the Knights! LOLOL

I love that part in the movie- when the locals come up and ask "Can we dance with your dates?"....it's a great movie!

off topic but tommy should get back with westerberg and make some REAL rock and roll!
I do like his new solo stuff.
if you had told me 20 years ago that one of the replacements would end up
in gnr i'd have thought you were nuts

good cash for tommy i guess.
he deserves it.

"Mind if we dance wiff your dates"? LMAO

That's my favorite part of the whole movie.

my favorite line from ah.
fat drunk and stupid is no way to go life son.

Fat, drunk and stupid.
I think you just described half of blogdom. LOL
(JUST KIDDING!)

I am on double double secret probation...

I read where Manson was getting the residuals from Guns N Roses until Bartek's attorney stepped in and got what was left for Bartek.

Also, I read where the only reason Bartek got anything was because his attorney kept renewing the judgement; the others didn't. I don't know who the others are. I haven't read where the Tates filed suit or anyone else.

Anway, if anyone else has more info, please share. Thanks!!

a friend of mine caught tommys show
in i think chicago last week.
he said it was big fun.

i wonder if hinmans or sheas family could get a piece of that gnr cash?

>>>Matt said: i wonder if hinmans or sheas family could get a piece of that gnr cash?>>>

I don't know if it's too late to file suit now or not. I've never read if they ever filed suit. Same with Parent's family or Sebring's family. The folgers probably don't care or want to be associated with this.

There is no statute on criminal offenses, but I think this is civil so they may be out of luck if they haven't filed before or if they let the judgement lapse.

Nicole Brown's family filed a civil suit against OJ and won, but I don't think they've seen much of that money either.

Like Mr. P said: "I myself prefer a check in my hand to a winning judgement on paper."

Lynn... have fun this weekend at the Country Faire in Topanga Canyon.
Oh, and take lots of pictures, and send them in! LOL
: )

Have a great weekend Lynn!!

The Bruins just beat the Lightning tonight in Game 7!
The score... 1-0.
Talk about a complete nail-biter.
GREAT HOCKEY GAME!`

Next stop... Stanley Cup playoffs against The Canucks!

This is gonna be tough.
The Canucks are a fabulous hockey team.
The Bruins have to be considered the under-dog here... I would think anyway.

bartek died a violent death like his father. he was stabbed to death either a suicide or stabbed to death by a girlfriend. i've heard both versions. bartek has a daughter who did something scandalous on a polish reality show, their version of big brother. she also has done some nude photo's. her name is Agnieska Frykowski, look her up. she is very well known in Poland as is the murder of her grandfather.

Thanks for the information Beauders!

if anyone can beat the canucks its the bruins.
they're a great team but they ain't
the 78 canadiens.
horton and thomas will never have to pay for a beer in boston again.
congrats to chiarelli for building the best bruins team since the late 70s.

Matt said>>>>
"horton and thomas will never have to pay for a beer in boston again".<<<<

Yeah... that was awesome!