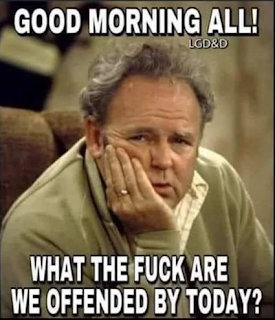 Posted by LynyrdSkynyrdBand at 11:00 AM

Well, do you want it alphabetically or in order of importance?

What happened to the drunken rant? (without mentioning any names)

Wow Sunset. Interesting. Because you seem to be somewhat of a "tough guy". You're a person who always gives an opinion. So what is your opinion?

What do you think about what's going on in this country right now? I know you must have an opinion. I'd really like to know.

In fact, I'd really like to know what anyone on this blog is thinking about what is going on in this country right now.

I don't have time right now, but I'll post a rant of my own later.

You know, I’ve been thinking about all of this, the screaming, the yelling, the over the top manufactured indignation. One man’s rant is another man’s screed. Discussion/debate is dead. We have become tribal in our thinking, and if you are not in my tribe, you are wrong no matter what, and vice versa. Seems to me that we are on the cusp ice of a cultural revolution of which the likes have not been seen since Mao in the Sixties.

The vast majority of Americans are remaining quiet for fear of retaliation by a cancel culture mentality. Silence does not breed agreement, but rather, silence breeds contempt and resentment. Much like a dog that has been kicked, a woman slapped, a child abused, there becomes that one moment where the victim rises up, and all hell breaks loose. I believe that we are fast approaching that moment with the American public. We, as a society, are being challenged on everything, right or wrong. We are being told that no matter what we, as a society, do, say, or believe, we are attacked for it. When those attacks transcend verbal wars into the physical, well, Katie bar the door. The recent riots will look like Sunday Church picnics.

Make no mistake, these times of turmoil are manufactured. Is that to mean that there are not instances of racism, sexism, abuses, etc? Of course not. America can confront its past, and change its future if you guide it. But when you mandate change, especially against imagined outrages, then you’d best expect push back. We now live in a time when many believe we should be rewarded for our temper tamtrums, that the more we behave like a four year old, the more we should be pacified at the cost of others. True self-responsibility is dead, it is not my fault. Such mentality does not strengthen a country, it only weakens us all.

Very well said Dill. I agree with everything you said. I also want to say that I feel really bad for policemen because their job was hard to do before all this protesting and rioting, but it's probably 500% harder to do now. They probably all feel like they're under a microscope by the media. And all this talk of defunding the police is maniacal lunatic talk that will lead to a very slippery slope, especially for the poorer communities where the violence is already on a daily basis.

With all the bad things going on in this country just this year, I can't help but think we're pretty close to the end times the Bible prophesied so many years ago. I had a long talk with a friend today and those were her thoughts and I have to say, it's starting to make more sense.

I'm glad President Trump signed an order that anyone who destroys statues will do prison time. Enough is enough. If certain statues are offensive to some people, then it needs to be put to a vote. If the majority rules to remove, then they should be removed professionally, not pushed over and burned. Our history is far from perfect, but it's still our history and shouldn't be buried and forgotten.

I don’t know that I totally disagree with the concept of defunding, as I do the actual process. LEO’s are in a thankless, no-win job. Their roles have morphed from protecting and serving to being the catch-all garbagemen for society. When you have someone in the middle of a mental crisis, or drug-induced incident, and you call the police, what do you expect to happen? Cops will deal with things in the manner for which they are trained, and social work, or drug counseling, is not their primary function. Want to defund the police? Fine. Start with removing calls for service regarding drugs or mental issues, the time saved on these types of calls will allow money to be used in other areas without impacting the safety of the officers, and society. Redistribution of monies for social programs would accomplish more than telling officers not to do what they were trained to do.

Good point Dill. Policemen are definitely being called for situations that could be controlled by other agencies. All minor "emergencies" should call 311 instead of 911. It will take the burden off of the police.

Happy 4th all. Are we repeating the sixties in a sense? And will it end badly again with the pendulum swinging back the other direction?

I think that depends on which side of the pendulum you are on....

Bobby! S.W.A.K! I know what Bobby means. Reverse discrimination. We suffered that in the 70's. The black people had their chance in the 70's and they blew it.

This country is going crazy right now with fireworks. Do you know what that means? They're SICK AND TIRED of this BLM stuff. Time to get on with this country and stop bowing and kow towing to the lib-tard media.

Bobby, Lynyrd told me to tell you hi and happy 4th of July!