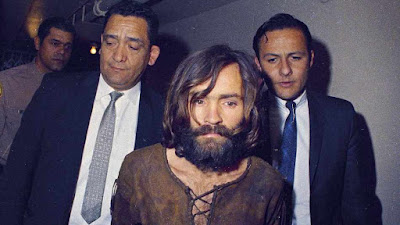 The fight over Charles Manson’s body and property became more complicated after a hearing in a downtown Los Angeles courtroom Monday.
Saying that dispensing the killer’s property and his remains were two different legal decisions, Probate Judge David J. Cowan told the killer’s longtime pen pal and an attorney for Manson’s grandson that a decision was weeks away.
Both men have to file paperwork on why they should receive Manson’s body and in which county they believe that decision should be made. Attorneys for Kern County — where Manson died on Nov. 19 — are awaiting the decision since they have the killer’s body on ice.
The judge’s order Monday further delays the conclusion of the Charles Manson saga.
Attorney Alan Davis, representing Manson’s grandson, Jason Freeman, has until Jan. 12 to file a claim for Manson’s remains, as well as arguments on the proper court venue. Michael Channels, a pen pal of Manson’s for 30 years who says he has a last will and testament from the killer, has to respond to Davis’ filing by Jan. 19.
A judge will then decide Jan. 26 where the respective cases should be heard.
Kern County said it wasn’t sure how to decide that because Manson lived in Los Angeles County before he was arrested and in Kings County when he was behind bars. State code says those decisions are made in the county where the decedent “domiciled,” or lived, and they’re not sure if that means before he was in prison or after.
With these legal intricacies in mind, the judge Monday told Manson’s pen pal, Channels, that he should hire a lawyer to help.
“I called 50 of them,” Channels replied. “Half of them hung up on me, the other half laughed.”
Channels said his relationship with Manson blossomed some 30 years ago out of morbid curiosity that led to him to first write the killer. About 15 years ago, he claims, Manson sent him a last will and testament awarding him everything.
In his spare time, he also operates the website Mansonbackporch.com, an online museum of the killer’s photos, writings and stories. There used to be recordings of phone conversations between Channels and Manson on there, but Channels said he took them down after Manson died.
A note under the “canteen” section of the site said that it was under construction as it developed payment options to purchase “limited edition” and “hard to find” items of the Manson family. It was not immediately clear how long that note had been on the site.
Manson was the mastermind of the gory rampage that claimed the life of pregnant actress Sharon Tate and six others during two August nights in Los Angeles in 1969. The killings both terrified and fascinated the nation.
The killer’s grandson in Florida, Jason Freeman, said if he received Manson’s remains, he would cremate them and spread them secretly so the location couldn’t be turned into a morbid tourist destination. Channels said he would do something similar and had no plans for the killer’s remaining property.
At least two other people are poised to enter the fray as well — a man in Santa Monica claims to have another final will and testament from Manson and the man’s colleague claims to be Manson’s biological son. But neither had filed court documents for their claims as of Monday.

With these legal intricacies in mind, the judge Monday told Manson’s pen pal, Channels, that he should hire a lawyer to help.

“I called 50 of them,” Channels replied. “Half of them hung up on me, the other half laughed.”

You'd think there would be an attorney in the L.A. area that wants to get his or her name in the paper. Maybe he should call Gloria Allred.

The cloven-hooved one is more in tune of representing the women of the family, claiming that the Wooly Hophead was simply the Harvey Weinstein of his time...

And Charlie never apologized to ANYONE for his actions. Not anyone! Not to the girls, not to the victims, and not to his children.

And that's the way that went.

Gloria could turn around now and fight for men's rights! She'd have a lot more clients. Men are the underdogs now.

She could start with "you're in my spot". LOL.

It's amazing how nobody seems to care about this circus. I can't blame them. It's morbid.

It's only a matter of time until someone sneaks in and takes of pic of Charlie on ice for a month. GRUESOME!

They need to end this circus. I've gotta say, as much as I can't stand Charles Manson, he doesn't deserve this bullshit kind of stuff after death.