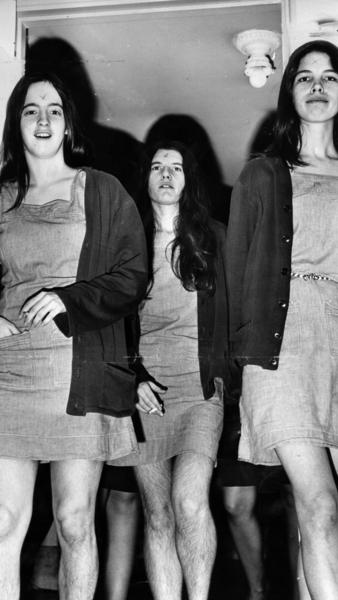 Leslie Van Houten, who was convicted along with other members of Charles Manson's cult in the 1969 killings of Leno and Rosemary LaBianca, was granted parole Wednesday by a panel of state commissioners in Chino.

Gov. Jerry Brown must now once again decide whether to release her from prison after 40 years. Brown rejected release last year. 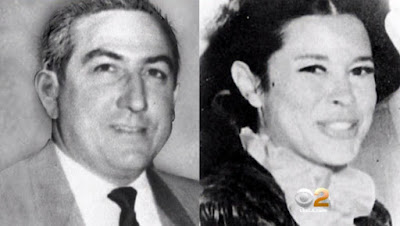 Her attorneys argue that she was only 19 when she took part in the crimes and that she has been a model prisoner. But release has been strongly opposed by the families of the victims as well as prosecutors and many others.

A 150-day review process will begin by state officials reviewing the granting of parole.

“If the decision stands, the matter will be sent to office of the Governor who will have 30 days to take one of five options. He may uphold, reverse, or modify the decision,” the state said.

Susanatkinsgonorhhea said...
This comment has been removed by the author.
September 6, 2017 at 7:49 PM

OK I made it as large as I could. You can see Pat's leg hair. But there's some on Susan's too.

I guess they only had access to sharp objects to carve "X"'s, not to shave their legs. LOL.

I'm thinking about putting up a picture of the autopsy photo of the knife puncture wounds Rosemary suffered, especially in the lower back. It's a disturbing photo, but it shows how "not innocent" Leslie was/is.

I'll think about it.

Krenwinkel must have been seriously injured by society regarding the hair issue. I feel sorry for Pat during her teen years she must have been in a lot pain.

I was just thinking that its a good thing Gov Brown is old enough to remember the murders, if it was a Gen X'er like me or even younger who hadnt been interested in the case theyd probably sign off on her parole

Yeah Beauders, you'd think that her parents would have gotten her some medical treatment for that hair, but I guess they didn't.

Although I guess Charlie convinced her that was all fine, because she seems to be proud of it in that picture.

Lol it was really bad in the early days of their imprisonment, didnt help that her hair is super dark either

Susan, I think that if the Gov let her go, he'd get a lot of flack for it from the old timers who remember what happened.

However, CA is so liberal who knows?

I didnt realize he was as old as he is, he'll be 80 next year but hes a liberal from a time when libs had some sanity as opposed to today when they openly hate their own country

I don't know how you'd get rid of that kind of hair except with electrolysis and I don't know what was available back then in that area. Like I said, you'd think that her parents would have taken her somewhere to get rid of that hair, but maybe they did, and it was just a temporary fix.

Beauders, do you know if her parents ever tried to get that fixed?

I have no idea, I would hope so though.

Hi all, long-time lurker here, just had to say that while I'm not surprised that the parole board granted her parole, ole Gov. Brown is another story. I just don't see him letting her out, jmho. I'm still reading thru all of the wonderful archives of this blog, and I look forward to lots of wonderful discussions! Enjoy your day, everyone!

I hope they all stay in prison. But I have to admit that if the victims had all been just ordinary Joe Blows from down the block, they all would have been out of prison by now. But the victims included Hollywood celebs so the killers must pay forever.

Hi Kathy.
Welcome to the blog.

Leno and Rosemary, and Gary Hinman and Donald Shea weren't Hollywood celebrities. I think these killers are denied for the reasons that have been given by parole boards and governors for many years. Multiple victims, horrific brutality, "callous disregard for human life", horrific suffering of the victims, "inexplicable" motive, inability to accept responsibility etc etc etc. People forget, or never understood to begin with, the widespread fear in Southern California at the time these murders took place. These are crimes that are worthy of life in prison. And I know their inadequate sentences allow for every one of them to apply for parole, good for them, but there's no guarantee. And I frankly don't care when they complain about trends over the years of rehab vs ongoing punishment being frustrating. Then don't invade a private home, "inexplicably" carve up people, commit other crimes while you're at it, and then laugh about it.

What stands out for me...nothing to do with celebrities or the association with crazy Charlie Manson ...but Leslie Van Houten...all by herself, asked to go on what she knew ahead of time was going to be a blood bath, she invaded a private home, she assaulted Rosemary LaBianca, and she's had a very tough time accepting responsibility..."I thought it had to be done"...seriously? Parole denial after parole denial, decades of therapy, and that's her best answer? Oh then there were times that the best she could do was exercise her right not to talk about "her crime" because, afterall, the facts are "well known" and she is focusing on moving forward. Gmafb.

I don't think she'll get out. I just wish the governor would give her a longer denial.

Theres people on another blog talking about having sympathy for Leslie, poor babys been in jail for 40 years, hasnt she paid enough? Im sure she'll be a nice little old lady on the outside, i mean its only one teensy weensy little murder she committed, lets give her a second chace lol

Carol, I'm sure the fact that their victims included Sharon Tate got them a lot more attention than they would have gotten, but the brutality of these crimes just can't be forgotten, no matter who the victims were.

These people have said again and again that they wanted to SHOCK the world. Well, they did. Carving "WAR" on a man's stomach? Not to mention the overkill of the stab wounds, beatings and kickings. And ALL these wounds inflicted on PERFECT STRANGERS!!! For no real reason at all!

Marliese I agree, I don't think she's getting out. She can pull every trick out of her sorcerer's pointed hat, but she WILLINGLY went to kill people, and managed to pull it off. That was totally her decision. Charlie & Tex didn't force her to do anything. And she needs to take responsibility for her actions, no matter how long it takes!

Susan other people on other blogs can think what they want. I think the general consensus here is that she needs to just stay put.

I can't help but feel sorry for Steven Parent and his family. He was like an afterthought. He just got thrown into the meat wagon with a John Doe tag on his toe.

This was a real guy with a family that loved him, dreams of a future and a willingness to work hard to achieve it.

I just feel sorry for the guy because he was/has been so overlooked in all this carnage. The news media rarely mentions him. He died by Tex's hand too...

Well, bottom line is, a 19 year knows it's wrong to kill.

That's a whole nother notch to go down.

When I was 19, there is no way I would have killed anyone. WHY? BECAUSE I KNEW IT WASN'T THE RIGHT THING TO DO!!!

Don't give me that crap that Leslie didn't know 1 from 2 since she was only 19.

That's BALONEY! She was FULLY AWARE of murder, and WILLINGLY went the next night!

The ONUS is on LESLIE!!!

You wouldnt do it because youre a normal human being who has empathy and feelings for other human beings, Leslie doesn't just like every other murderer, their needs and desires and wants come before ANYTHING, even other human lives, ive never even harbored a thought of killing a person and there have been some people i DESPISE but i never once thought of murder

I agree on Steve and that is one reason i believe Linda is just as guilty as Tex, Pat and Susan, Linda could have screamed DRIVE!!! HES GOT A GUN!! at Steven and POSSIBLY ran Tex down and crashed through the gate but she not only said nothing but she even got into the car and rifled through Steves wallet

She knew about Cielo and "begged with my eyes" to go on Saturday, that type of character flaw doesnt leave you

Susanatkinsgonorhhea said...
This comment has been removed by the author.
September 7, 2017 at 10:43 PM

Yeah Susan, Leslie knew exactly what she was doing. She's scary. And I don't think she's changed after all these years, because she keeps trying to get out!

If she understood the gravity of what she did, she'd quit trying and just stay in prison until she dies, because she knows that's what she deserves.

But she keeps blaming her actions on other people. That's why she doesn't understand the gravity of what she did.

And the same goes for Pat! Now she's claiming she was a victim of Manson because HE SAID SHE WAS PRETTY!!! HA HA HA!

Lesson for you boys out there: Don't ever tell an ugly girl she's pretty. She might repeat that in a court of law and blame her horrible actions on you! HA HA!

Lol, yeah i agree on Leslie and Pat, i was watching a show a few weeks back on David Berkowitz and even though hes a complete loony evil psycho i respect the fact that he ssys he deserves to be where he is and ssys he should never be released

Pats even worse than Leslie or Susan

My question is why are Leslie and Bruce getting parole? These people on the parole boards are extremely conservative and most are former police. On Pat's hair issue why didn't she take care of it or did she in high school, if I had that issue I would spend all my free time shaving if necessary.

Doubt there were too many of those cute pink razors and nice hot baths or showers at Spahn lol, and theyre probably just using certain criteria and guidelines with Leslie and Bruce and trying to be as objective as possible, everyone is going to have an opiniom on it, personally i think they should both stay behind bars but im not on the parole board so....

Just saw a piece on Tucker Carlson about a prison overcrowding issue in CA that Gov Brown is having to contend with now, apparently a violent offender got cut loose because of state guidelines on overcrowding and killed a cop

Thanks Lynyrd, I love your blog!