Mass murderer Charles Manson was taken from a Central Valley prison to a hospital for an undisclosed medical issue, two sources familiar with the situation said.

One of the sources said Manson was seriously ill but could not provide specific information.

Officials with the California Department of Corrections and Rehabilitation declined to comment, citing federal and state laws and saying inmates' medical information is private.

"We do not disclose inmate movements for safety and security reasons," said Terry Thornton, a department spokeswoman. 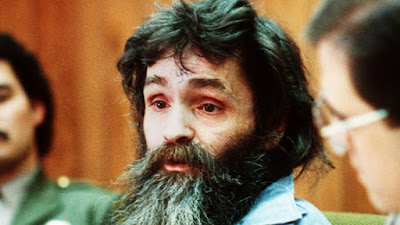 According to TMZ, Manson is being treated for "gastrointestinal issues".

What's the world come to when TMZ is now a news source?!

Okay there are a lot of points of discussion.

First, he's an old man dying. Whatever comes next, some people say they know, I say nobody really knows, but pass peacefully out of this life. No matter what you did.

Second, he was just a crazy little mentally ill character who was a C list musician who got into drugs and ran into some cute white girls. Nothing good is going to happen from that.

Third, the steady diet of drugs, especially hallucinate drugs, is going to change your ability to make good decisions.

Fourth, and I usually never go past three, what you did in 1969 probably has nothing to do with who you are RIGHT NOW!

"Cute white girls"? Who was that? Did he meet somebody we don't know about?