People magazine reports Love writes that Manson and his followers moved in with bandmate Dennis Wilson in 1968, a little more than a year before Manson's cult killed seven people, including actress Sharon Tate.

Love recalls being at the house with another Beach Boy, Bruce Johnston, when Manson handed out LSD and was "orchestrating sex partners" for some of his female followers. Love says he tried to bow out of the situation and went to take a shower, but was confronted by Manson, who Love says told him, "you can't leave the group."

By The Associated Press, 2 hours ago 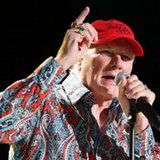 I hate when a 5' 2" hippie cult leader forces me to have sex with multiple young girls.

Mike tried to "bow out". LOL

The whole story sounds like a crock o' shit to me...


Ya know, people don't live up to their names like they used to!!

I hate when a 5' 2" hippie cult leader forces me to have sex with multiple young girls.

Those girls got crabs taller than 5'2"

Mike Love, isn't that the guy that every time you see a Beach Boys video, he's just standing around with his arms folded?

Just kind of thinking out loud here, but...

Part of the interview says:

"I just saw Charlie take his M16 and blow this black cat [man] in half and stuff him down the well," Wilson allegedly told Love.

What if Love was mistaken and that was actually said by Bryan Lukashevsky, (Possibly a confidant of Dennis Wilson) an M16 being all blown out of proportion of course...seeing it was actually a 22 cal that shot Bernard Crowe...

And for embellishment or drug fueled imagination the bit about being stuffed down a well...

I have a water well on my property (my main water source), and the pipe is at most 6 inches, enough for the pump to fit nicely...

Kimchi, maybe it was a wishing well....

I seen a comment on here about shooting a cat in half and throwing it down a well with an "M-16". I've seen several photos of the weapons the Manson family had, I've never seen an M-16 in any of them, there is (maybe in more than one photo) an M-1 carbine. Various firearms involved with these people have been misidentified by various sources before.

My dad had an M-1 carbine, it was military surplus, several people had them when I was a kid. It fired .30 caliber, semi automatic, I think dad's had a 15 round magazine but you could get a "banana clip" for them. I doubt a single shot would "blow a cat in half", but if you stood there and fired the entire magazine into a cat it could very possibly cut a cat in half. My dad seen a group of drunken hunters shoot off an oak tree over 1 foot in diameter one morning before daylight the first day of deer season.

Anyway, here's a link to a story in the LA Times about the Beach Boy book-->http://www.latimes.com/books/la-ca-jc-my-life-as-a-beach-boy-review-20160823-snap-story.html